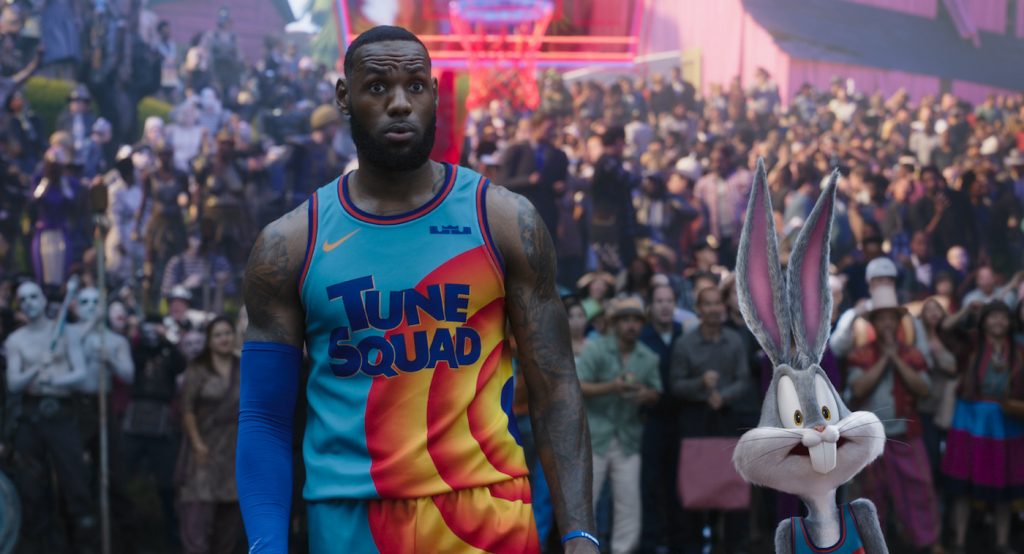 In Space Jam’s contemporary follow-up, Space Jam: A New Legacy, from director Malcolm D. Lee, the movie’s apex basketball game comes about thanks to star LeBron James’s youngest son, Dom (Cedric Joe), who doesn’t want to play the sport at all. Dom would rather design and program his own video games, an interest which inadvertently leads him and his father into the bowels of the Warner 3000 ServerVerse, run by a maniacal algorithm, Al G. Rhythm (Don Cheadle). Trapped, Dom ends up Al’s unwitting protégé, while LeBron, having crash-landed in Looney Tunes land, enlists the help of Bugs Bunny, Daffy Duck, Sylvester, Tweety Bird, and the rest of the gang to form a basketball team who will help him get his son back. In exchange, the Looney Tunes, dealing with their own ongoing plight at the hands of Al, will gain their freedom from the algorithm.

Zendaya was enlisted to voice the historically more seldom seen Lola Bunny, but for three of Looney Tunes’ legacy characters — Bugs, Sylvester, and Yosemite Sam, as well as appearances by Yogi Bear and Fred Flintstone — Lee brought on veteran voice actor Jeff Bergman. The first person to take over Bugs Bunny after the character’s original voice, Mel Blanc, passed away in 1989, Bergman has gone on to voice a number of Looney Tunes characters for decades (here’s an example of him in action as Bugs). He also lends his craft to characters in Tiny Toons and the world of Hanna-Barbera, among many others.

For Bergman, Space Jam: A New Legacy’s premiere was his first time back in the theater in over a year. Shot during the pandemic, we had the chance to sit and down and speak with the voice actor about filming the movie from home, meeting star LeBron James for the first time at the premiere, and the chance meeting with Mel Blanc four decades ago that set Bergman’s career trajectory in motion. Space Jam: A New Legacy is in theaters and on HBO Max now.

Did you grow up a Looney Tunes fan?

Yes, I did, but not any more than anyone else. It was part of Saturday morning. I grew up in the late 60s, early 70s. Televisions were in people’s homes for maybe 15 years, so everything that was on TV was exciting. It was all so new, in its infancy. So early Saturday morning cartoons you could watch, but that was kind of it. There was a designated day and time for that, whether it was Spiderman, Batman, Superman, and certainly Looney Tunes. And as I got older, I think I understood them more. I got the inside jokes as I got a little bit more sophisticated.

You once met Mel Blanc while you were in college, right?

Yes, 40 years ago I was in my junior year at the University of Pittsburgh and I happened to be walking around the campus and noticed the sign, Mel Blanc Appearing at Pitt, Voice of Bugs Bunny, and I thought whoa, how cool is that? Just by chance, I saw that sign, showed up, and saw his performance and lecture. He was great. Then I found out where he was staying on the campus and knocked on his door at ten o’clock at night and we spent about an hour together. That was a watershed moment, that changed everything for me.

Did that lead directly to your career?

Well, you know, I was a 20-year-old kid and I didn’t know what I was going to do. I certainly think I wanted to be a performer, but if you don’t meet anybody who does what you do…it was the first time I met somebody where it was like hey, they kind of get me and I get them. He was very encouraging. I didn’t want to stay in school, necessarily. I wasn’t an academic. And he said, try to stay in school and get your degree, and if you ever get out to Los Angeles, come and look me up. Eight years later he passed away and it was on my birthday. Three weeks after that, they were casting for Steven Spielberg’s Tiny Toon Adventures. So I started auditioning for the voice of Bugs Bunny, just a few weeks after Mel Blanc had passed away. It was all happening quickly, even though there was an eight-year span, but I never did get to meet him again.

Is it a challenge to keep the characters’ voices consistent over so many years?

I always feel my job is to impart what it is you remember about the Looney Tunes as a child. That means I have to do a lot of research. I have to watch everything I can get ahold of. That means every cartoon, every commercial, any material because there’s a gem in everything. And so somewhere along the way, I’m going to do something that might trigger your memory and capture that essence of what you remember. And that’s not an easy job to do, because everybody has a different reference point.

Out of the characters you voice, is one harder than the other? Or maybe a little trickier to summon and land exactly right?

[Bugs Bunny voice:] Well, I’ll tell you something, Doc. I’d have to say that they all present their own complexities. [As Bergman again:] Especially Bugs, because Bugs has been around for more than 80 years, so everybody knows that voice. People just know that character right away. I’d say those three [Bugs, Fred Flinstone, and Yogi Bear] are particularly complex because there’s so much I’m trying to recreate when I do it. And you’re only doing it in a very small space—five seconds you’ve got to recreate that memory for somebody.

You’re also working in a literal small space, a recording booth, where you can’t use your physicality to convey the character.

When you think about it, here’s the mic, and right away I have to find that sweet spot. I don’t have much movement to do. Even when film actors get in there, they’re all over the place because they’re not used to that. It’s a lot of internal stuff, and that hopefully is going to come through in the reading. You can use your hands, which are very helpful because that sort of motion funnels through that, but you have to be careful not to move too much.

Did you get any unusual direction, or direction that felt new and very specific to this Space Jam film, from director Malcolm D. Lee?

Malcolm was especially helpful in this project, more than anything I’ve ever done, because we filmed this during the pandemic. So we were remote, all in our homes. Typically we do work with an ensemble cast, so with a few of the actors you’re in scenes with, you get to play off each other, but we didn’t have that. These were big Zoom calls where you have Malcolm Lee, Spike Brandt, the animation director, script supervisor, the producer, etc. If there’s a scene between LeBron and me and there’s no recording of LeBron, I have to get as much context as I can from the director. Malcolm was just so wonderful. He was working with LeBron, so he had a real sense of either how LeBron was going to deliver the line, or they knew it as he’d done it, so they would sometimes read his lines for me and I’d jump in with Bugs Bunny. So I had a pretty nice contextual background and then, of course, you do so many different takes for just one line. When we shot the end of the film, we must have done it 20 different ways.

Did you get to interact or work directly with LeBron James at all?

In fact, last night was the first time I met LeBron and it was at the screening. We had all seen the film and I saw him from a distance. There was a sea of people trying to get to him, and he’s so imposing, and even taller because he was on the stairs and I was even lower. I knew it was my voice that would carry, so I yelled out “LeBron, we really are family” [as Bugs] and he saw me and had the biggest grin on his face. We met face to face for the first time, congratulated each other, and he’s holding his daughter the whole time. That was just a cool moment. I was awestruck to meet him.