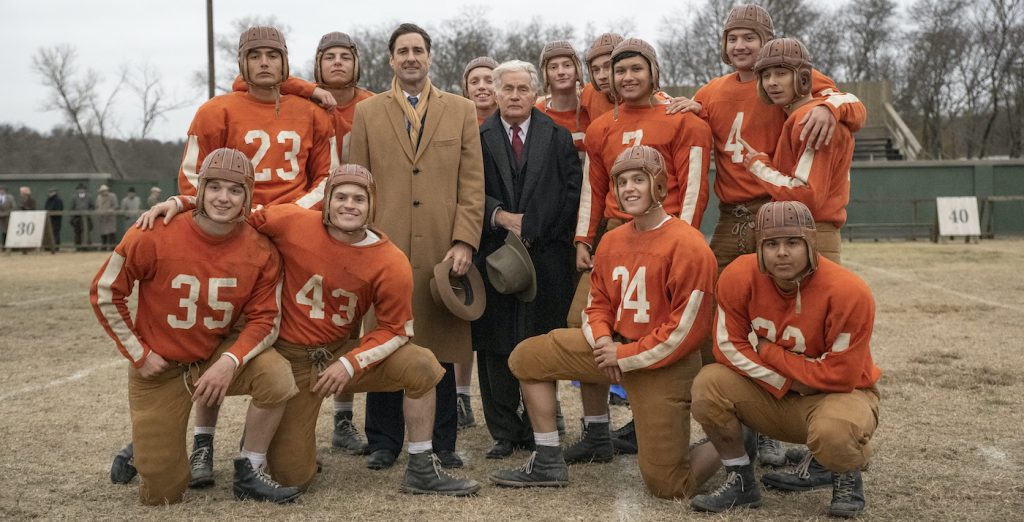 As underdog sports dramas go, it’s hard to improve on the fact-based 12 Mighty Orphans, which tracks a team of scrawny teenagers living in a Fort Worth orphanage as they progress from dead-last in their league to the 1938 state finals under the leadership of Coach Rusty Russell (Luke Wilson). Football fans might marvel at the antique charm of the players’ homemade uniforms while vintage fashion buffs can savor a cavalcade of period-perfect hats worn by Wilson, Martin Sheen, Wayne Knight, Robert Duvall, and every other man who appears on screen.

The haberdashery comes courtesy of costume designer Juliana Hoffpauir, who worked as the key costumer on ’60s-era films Green Book and One Night in Miami before teaming with Texas-based director Ty Roberts on 12 Mighty Orphans (opening nationwide June 18). “We could not have made this movie without the hats,” says Hoffpauir, and she’s not joking.

Zooming from New Orleans, Hoffpauir talks about how she nailed Dustbowl-era couture both on and off the field.

Where did you research the look for 12 Mighty Orphans?

Ty sent me a scrapbook put together by an orphan from the Masonic Home and School of Texas, which started in 1932 and went through 1940. It was very personal, done with a lot of love and care. I got to see what the real orphans that are portrayed in our movie actually wore in class and at football practice.

Football uniforms from the late thirties look much less elaborate than today’s super-protective outfits with the giant shoulder pads and helmets. How did you put together the Mighty Mites uniforms?

In real life, the Mighty Mites football uniforms were made by the girls at the school, who hand-painted the letters onto the boys’ uniforms, so we made those. For later in the season, manufacturers provided us with a utility jersey, and then our amazing dyer Susan dyed all those jerseys to get to this orange rust, the team color. The pants, cleats, pads and most of the leather football helmets all came from this company that also did the George Clooney movie Leatherheads. But they didn’t have enough leather helmets so I looked on eBay and found a leather helmet manufacturer outside of Dallas.

Wait, there’s a company in 2021 that manufactures leather football helmets?

Yes, it was more of a memorabilia type of helmet, not really for people to play football in, so we had to add chin straps and stuff like that.

Off the field, a lot of the orphans seem to be wearing what we would today call jumpsuits. Did they really dress like that?

In the scrapbook, I’d often see seven and eight-year-old kids wearing these cotton twill coveralls, and it’s the cutest thing. The orphans wore them to classes and also at the printing press and in the field where they worked. They were basically living in those coveralls.

Where did you source Depression-era coveralls?

Dickies manufactures this type of workwear in Fort Worth so I went to their headquarters and they showed me their archives. Vintage Dickies had a wider collar and pockets. I couldn’t get a hold of a dozen vintage coveralls so we bought new ones and tweaked them to look different from todays. We also washed them down so they look worn in.

How did you define Luke Wilson’s look as Coach Rusty Russell?

Rusty was known for being an immaculate dresser who took pride in the way he presented himself. He was dapper! Luke did not want to wear the classic boxy suit from that era so we compromised and made him a [well-fitted] navy suit and an olive green suit. For the games, we put him in the three-piece navy suit so we could get great shots of him in his white shirt and vest. With Luke, we wanted to channel that classic Gregory Peck look.

True to the period, every man in this movie wears a fedora. How did you figure out what those hats should look like?

I had pictures of the real Rusty in his fedora and also found great archival photos online from the University of Arlington near Dallas. All the men are wearing some kind of western soft-felt fedora, whether it’s a Stetson or a Dobbs, or Borsalino.

Where did you round up such a large quantity of period-perfect hats?

Stephen Chudej, who is no longer with us, was a great costumer in his own right. He had an airplane hanger in McKinney Texas full of period costumes and all these Stetsons that he was liquidating, so we got a lot from him. I also got stuff from eBay and Etsy. And then Greg Mitchell, known as the hat whisperer, brought his shaping machine and helped me with Martin Sheen and Robert Duvall’s hats. Another gentleman named Daniel Wright had a place in Fort Worth and taught me about the history of Forth Worth hats. Working with those guys, I felt pretty confident because hats are tricky. You don’t want to put the wrong hat on someone.

12 Mighty Orphans includes big football game crowd scenes. Was it challenging to dress so many extras on an indie budget?

The extras were the biggest challenge in the movie and my key costumer/tailor Leila Heise really worked double time. I’d email the extras: “If you have them please bring round-toe, lace-up dress shoes, wider pants, light white or cream dress shirts and tie.” You can’t rely on extras to show up with the right thing, but you can always put them in a period overcoat and a hat, and a tie and you can’t really tell.

Martin Sheen brings a sort of rumpled elegance to his kindly physician Doc Hall. How did you see that character?

We wanted him a little bit undone at the beginning because Doc Hall’s a drinker/. There was this great necktie I saw at Daniel’s place, a western ascot kind of situation. Everyone else wore a tie so we wanted to do something a little different with Martin. He’s a little — I don’t want to say disheveled — but a little loose.

The epilogue of this movie features photographs of the actual Masonic Home orphans portrayed in the film. I wonder if those first-hand scrapbook images gave you a more personal way into the story or impacted the way you felt about these characters and their clothes?

When you have the responsibility of depicting real people you try your hardest to get it right. In fact, we had the real Opal [portrayed in the film by Natasha Bassett] show up one day on set wearing her husband’s letter jacket.

She must be in her nineties!

It was a really touching moment. Opal had just lost her husband the year before and wished he’d been lived long enough to see this movie being made about their experiences. We actually had a lot of orphans from the thirties forties and fifties participate as extras for the football games. Before 12 Orphans, I’d never had that kind of experience and I probably never will again. It really felt homemade.