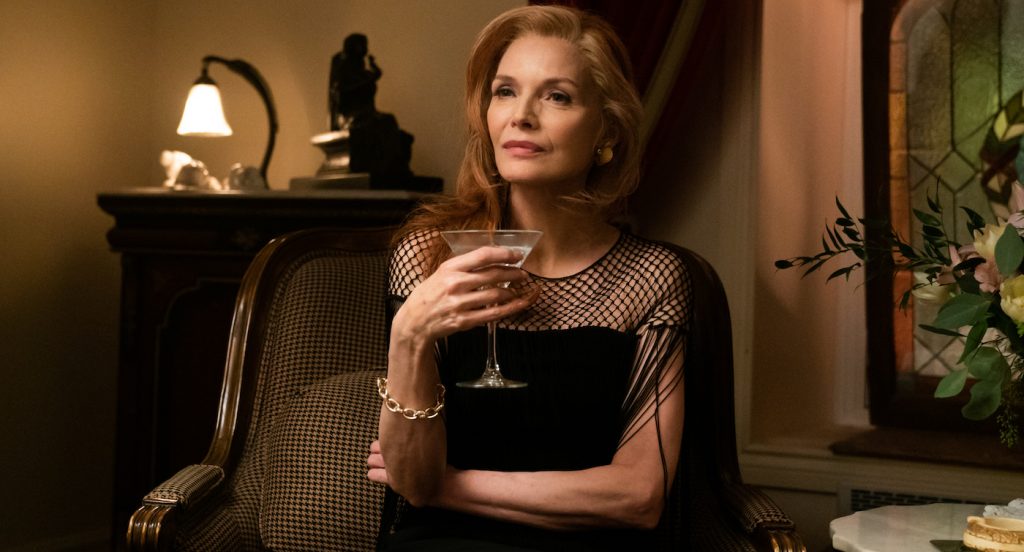 Director Azazel Jacobs‘ French Exit won’t, on first blush, seem like a feel-good movie. Its protagonist, Frances Price (Michelle Pfeiffer), is a ferociously acerbic fading socialite who more or less doesn’t want to live anymore. Based on Jacobs’ friend and collaborator Patrick DeWitt’s novel (and adapted by DeWitt himself), there seems no earthly reason why anyone, in the year 2021, would feel affectionate towards a privileged woman lamenting her third act turn towards insolvency by savaging everyone in her path. And yet.

One obvious reason Frances is hard to hate is she’s played by Pfeiffer, who is able to verbally decapitate a character while keeping her victim, and us, spellbound and weirdly hopeful about what she might say next. And despite her ennui, long-simmering and finally boiling over as French Exit begins, Frances often does have something to say next, and it’s there that she reveals the person she’s really dead-set on hurting is herself.

If this still all sounds depressing, it’s not. Or not quite. Jacobs’ coup in landing Pfeiffer is not the only reason French Exit charms. The supporting cast, which includes Lucas Hedges as her emotionally repressed son Malcolm, Valerie Mahaffey as a besotted hanger-on Madame Reynard, Susan Coyne as her best friend Joan, and Danielle Macdonald and Isaach De Bankolé as Madeleine the Medium and a French private investigator named Julius, respectively, all exude offbeat charm. Frances might head to Paris with Malcolm to fritter away the rest of her money before she offs herself, but she accidentally creates an island of misfit toys there in the process.

I spoke to Jacobs about loving Frances, the beguiling third act, and more. This interview has been edited for length and clarity.

How come this movie, despite being about a woman who wants to stop living, filled me with hope?

That’s so cool. That’s the hope. The film was such an escape for me, definitely making it, and then in the process of finishing it this past year during the pandemic. I think if there’s anything I hope an audience will get, it’s that feeling of escape.

You read your friend Patrick DeWitt‘s novel “French Exit” well before it was published—how did you know you wanted it to be your next film?

Patrick and I have been close for a very long time, sharing our work when we can still make changes according to each other’s responses. I immediately called him after I read his draft to express not only how much I had loved what he’d written, but my desire to turn it into a film. I read it in one sitting, took two minutes and thought about it, and felt, I want to be with these people. I want to go into this world, and luckily he was excited about that idea. And so going from his manuscript into the screenplay began even before the book was finished.

You’re working on this character long before you know you’re going to get Michelle Pfeiffer—what was it you loved about the pre-Michelle Frances Price?

It felt wild that I connected to her, because not only does this person come from such a different world as my own, she may as well come from a different planet. There’s nothing here that I could connect to, other than I’m connecting to her as a human being. One of the ways of cutting powerful people down to size, people who have way too much control or attention in this world, is by humanizing them. Because I always looked at the society pages in the New York Times and they made no sense to me. Why are these people famous? They’re not famous at all, I don’t even know who they are! Then finding out, oh, this is their whole world. These pages are their world and this is what’s important to them, and you start digging in deeper and finding as many flaws as you’ll find with anybody else, except the stakes are so different for them because they’ve been floating in a castle this whole time. So when that castle cracks, it’s fascinating.

Pfeiffer is sensational in the role, and there’s also a vicarious thrill to watch her do and say things 99% of us have felt, but would never, ever act on.

One of the things I loved about Frances Price, and that I found as intoxicating as a filmmaker, is her not caring what others think. And maybe it’s because she’s as beautiful and as wealthy as she is that she’s able to do that, but I really found a lot of inspiration in walking to the beat of your own drum. If you’re going back to what Patrick and I first bonded over, it was punk rock. Those heroes were like that, too. ‘This is what I’m doing, and whether it’s timely or fashionable or not, that doesn’t really make a difference.’

Frances Prices can be scathing, to the point of a misdemeanor (one scene in a French cafe comes to mind)—what did Michelle see in the role?

The first feeling I got from meeting Michelle Pfeiffer was, here’s somebody that’s impossibly beautiful, and impossibly intelligent, and she’s proven herself so many times over and over again, and yet she’s still hungry, she’s still interested, she’s still curious, she’s still going towards things that she doesn’t know what the results will be. There’s nothing safe about this film. It’s definitely not a fashionable film. There’s nothing remotely timely about it. I could see Michelle’s hunger, just in the first few minutes of talking about this film with her, and it was something I found extremely contagious and something that wound up becoming a part of getting to that side of Frances where she doesn’t give a f**k about others, and at the same time there’s this turmoil and a lot of care bubbling underneath it all.

One of the many standout sequences is when Frances and Malcolm attend Madame Reynard’s “party” at her beautiful home in Paris, only to find out there is no party and it was all a rouse for Madame Reynard to get close to Frances. Frances is…not initially happy about this.

Frances can’t believe that her life has wound up in this situation, where she’s sitting with one of these admirers, and she’s thinking, ‘How did my life get to this place where I’m with this completely awkward person?’ And then Michelle does this amazing thing where she talks about her life falling completely to pieces, and she says, “and I’m up—set about it.” That space between up and set! That’s all Michelle, and that’s everything. That crack right there, you go, Ah, you’re inside. At least that’s how I feel.

I’m not going to ask you to unpack the third act, but I was curious how you felt about it overall? It moves to its own, strange rhythm.

This happened with my movie Terri, which Patrick wrote as well. I feel like the third act is the one you get to go completely into surprising, unpredictable places. Either the audience is with you or they’re not. In this case, we have lots of people starting to gather in the apartment, and if one of your questions is, ‘Why are people gathering in this apartment?’ Then it’s not the film for you. That’s not the question. You should really be questioning why Clark Kent is also Superman. You should be hung up on all of these things. What I found so exciting about that third act is finding all these different tones. Not only of genres but of characters that are coming together and clashing and contrasting and complimenting each other. Ultimately, this is an island of lost souls that gathered and feel a little bit less lost in the drama, and that’s what filmmaking is for me.

The relationship between Frances and Malcolm is quite unique. I’m curious what your take on their dynamic was, first reading the novel and then in the adaptation.

I think it’s a parent-child relationship, but who the parent is and who the child is starts to shift, which is the way it’s happened in my own life. I think that’s the truth, especially when you’re young and you start seeing faults in your parents and things that you could do differently or better, it really explodes your world. I see Malcolm as somebody that, on one side, is the most immature character in the film. He can’t express himself, and in a lot of ways, his life began at 12 when his mother came to pick him up and take him out of boarding school. At the same time, Malcolm is one of the wisest characters. He says so much without words. Frances uses words like a dagger, while Malcolm uses his eyes and his expressions as a cushion, as support, always embracing his mother, trying to look out for her. It’s an ever-shifting power dynamic, and a love dynamic, that I find rarely represented in films. It was one of the things that drew me to wanting to tell this story.

One of the things with Lucas that we really bonded over was watching movies in preparation. Our first screening was Aki Kaurismäki’s La Vie de bohème. The next film we watched was The King of Comedy. Then we watched Popeye, it’s so fantastical and so committed to the fantastical. Then we watched Playtime. All these films handle playfulness with such seriousness. Patrick, Lucas, and I watched Being There together. But really, Harold and Maude was the film I thought most about. In retrospect now, seeing all the polarized reactions to this film, it helps to go back and look at all these films I’ve listed and see the reactions to them. Those are the films I loved the most, and while I couldn’t have aimed for it, I do enjoy having made a polarizing film myself.