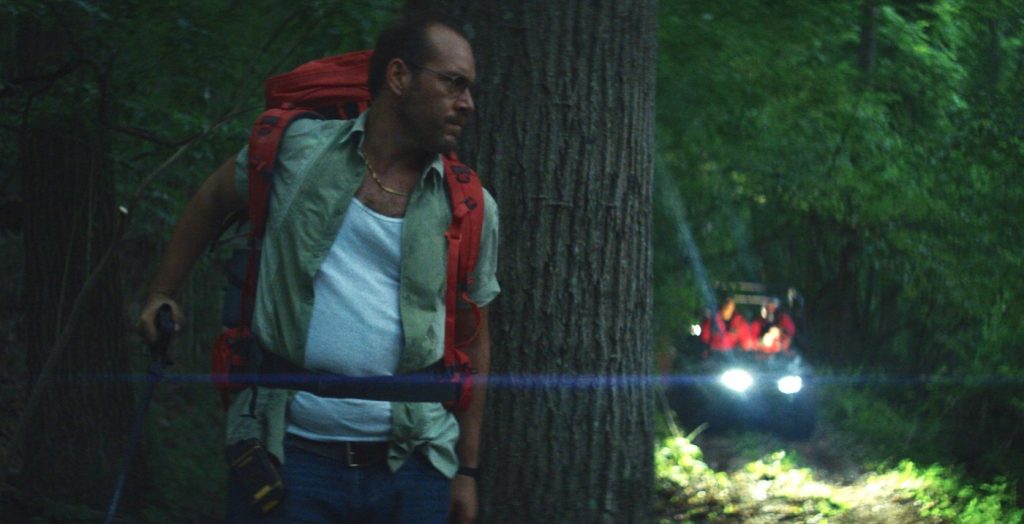 Writer/director Noah Hutton was due to make his narrative feature debut with his sci-fi film Lapsis at SXSW in March of 2020. You know how that turned out. Nearly a year later, Hutton’s slyly lacerating debut is now available on Virtual Cinema, VOD, and Digital. His low-budget feature debut is an impressive feat of world-building, cinematic wit, and a darkly funny critique of late-stage capitalism, specifically corporate greed and the exploitation of workers.

Hutton not only wrote and directed his debut feature, but he also served as editor and composer. Lapsis is centered on Ray Tincelli (Dean Imperial), a decent man struggling to make ends meet and take care of his ailing younger brother. Ray’s airline gig doesn’t pay enough to cover his brother’s expensive clinic, and desperate to provide for him, he takes a job in what appears to be the potentially lucrative field of quantum computing. Yet Lapsis is not the kind of sci-fi film that’s all smooth lines and elegant, Apple-like gadgets. Part of the film’s charm is how beautifully mundane the tech is, and how much of Ray’s job is old-school manual labor. Ray’s thankless labor is required to provide this technological advancement for the masses, one that promises a brighter future—for some. While the film is set in an alternative present, the depersonalizing effect of Ray’s relentless job looks squarely at the greed and quiet cruelty of the gig economy we’re living in.

“[The inspiration] came from a different few places,” Hutton says. “This high concept sci-fi world is a little mysterious, and I wasn’t inspired by one event or thing. It’s a feeling, really, that I’ve had in the last decade of being an independent contractor. That’s what got me to a place where I could make this film, the feeling of going from gig to gig. It’s a feeling that I think is shared by many people, and I wanted to capture that somehow.”

Lapsis takes direct aim at the exhausting pervasiveness of gig work, and the way the companies that this labor makes possible present themselves as merely the next stage in capitalistic evolution, where consumers and workers get precisely what they want. This is, of course, demonstrably false, and this is the thread Hutton successfully pulls on. In Lapsis, to empower this quantum computing revolution, Ray has to trudge miles through the woods dragging a cable behind him to connect it to these frankly despotic-looking cubes. Ray and his fellow cablers are in competition against robots for the most lucrative routes. As Ray schleps, and schleps, and schleps, he becomes entangled in the struggle for his fellow worker’s rights, thanks to a helpful tip from a long-time cabler Anna (Madeline Wise).

“To get from inspiration to the physical concept of cabling took a few steps, but it’s the core feeling of being on the treadmill of labor,” Hutton says. “The absurdity of the way that labor can feel when you’re engaged in it—it can feel like pulling this cable across miles of forest. Being a part of a system operating on a larger network, you’re segregated from the output of your labor, and you just kind of move onto the next gig.”

Not only is the physical world-building Hutton pulled off impressive—more on that in a second—but so, too, is the sly tone of the film. It’s not shouting Uber and its ilk are inhumane! Hutton’s film takes a softer, less didactic approach, poking the bear of insatiable corporate greed with humor. Yet you can feel the outrage as Hutton builds out this world of scams upon scams upon scams.

Hutton says one source of inspiration was reading about quantum technology and this notion that despite sounding ultra-sophisticated, in order to actually work it will require new cables.

“So if we were going to run a quantum internet, it would require blue-collar labor,” Hutton says. “I’m very interested in blue-collar sci-fi, as what we usually see is white-collar sci-fi, with the focus on the people who discover or create the technology and how it becomes profitable. Rarely do we get stories about what’s happened 5-10 years later and how the technology has trickled down to affect the working class.”

The robots that Ray is in competition with were actually built by a team of students that Hutton engaged. The little critters you see challenging Ray and his cablers for the best routes really worked. There’s a lot of this kind of practical wizardy on display in Lapsis, which helps give the film an appealing, lived-in vibe.

As for his multiple roles on the film, Hutton says it was just a function of trying to get his first feature in the can and knowing more or less precisely what he wanted from post-production.

“It was always the intention to wear these hats, but it’s not something I’m going to be precious about needing to do in the future,” he says. “I think because I came up wearing all those hats in documentary work and this being my first time doing a narrative, these were things I not only loved doing but felt that I could do on the film. I’m interested in working with a composer in the future, but editing is near and dear to my heart. I make my living as an editor on commercial projects.”

As for working with his actors, Hutton did his homework before he began filming (there were more than 40 speaking parts in Lapsis, which is a lot for an indie film, let alone one with a modest budget). He took a masterclass at the Labyrinth Theater Company in which he worked with actors. “I also made a few narrative shorts to get into working with actors. It also helped that I come from a family of actors, my parents are actors, so I grew up with their complaints [laughs].”