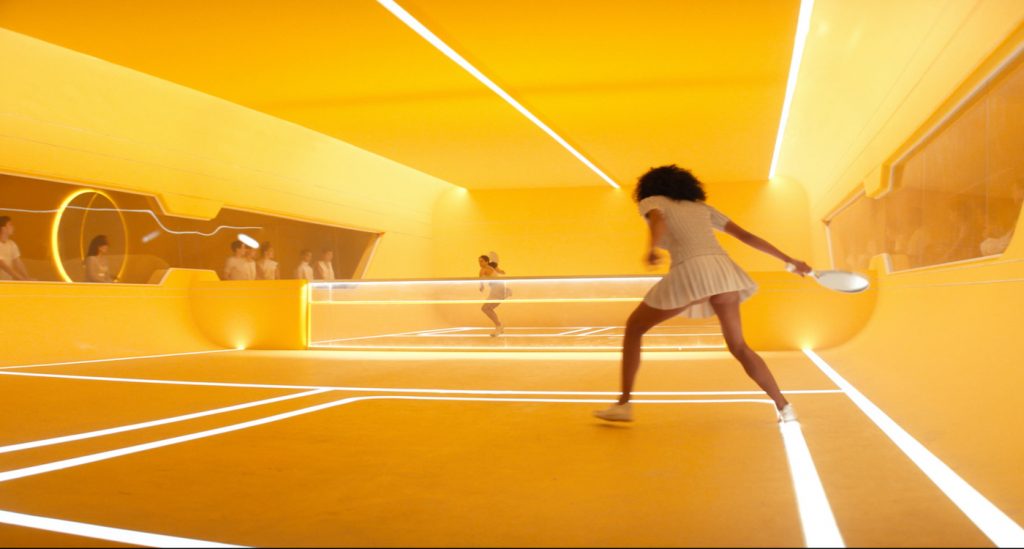 For visual effects supervisor Thomas Horton, Peacock’s new series Brave New World, which premiered on July 15, presented a serious challenge. Horton was tasked with overseeing the streaming channel’s ambitious adaptation of Aldous Huxley’s legendary sci-fi novel, which despite being published in 1932 still contains so many unkillable themes and foundational science fiction tropes it remains fresh today. Huxley’s vision of a futuristic dystopia ordered by an intelligence-based hierarchy is equaled only by George Orwell’s Nineteen Eighty-Four in terms of cultural impact. To adapt Huxley’s vision for the screen (the last attempt was a 1998 TV movie adaptation from NBC), creators Grant Morrison, Brian Taylor, and David Wiener needed someone to not only handle the world-building, but to imagine a world designed by artificial intelligence. Horton’s done historical drama (The King’s Speech), fantasy (Emerald City), and comedy (A Series of Unfortunate Events), but Brave New World posed challenge unlike any he’d attempted before.

“The sets had a massive amount of blue screen,” Horton says, “the biggest I’ve ever had to CGI.” Huxley’s iconic novel gets a few updates here, including the aforementioned artificial intelligence—named Indra—that literally builds the world of New London. With limited time on location and a need to create a believable futuristic world created by an inhuman superintelligence, on schedule, within the budget, and, as it would turn out, during a global pandemic, Horton and his team had to envision their own future and work in ways they’d never attempted before.

“Because New London is built by an A.I., instead of taking the drama out into the streets, we brought the streets into the drama,” Horton says. The A.I. designed cityscape is visible through the windows of the Bureau of Stability, for example, where the “utopian” society of New London is kept under a watchful eye. Pesky and archaic freedoms like privacy, money, family, and monogamy are prohibited. The skyline is gleamingly perfect and seemingly inhuman, yet it was constructed by not just Horton and his team, but talented real-life architects.

“There was a lot of collaboration with the art department to find the balance between set builds and CG and integrate the design,” Horton says. “There’s a point at which concept artists can only go so far. For a city to be real it has to be functional.” While Horton has helped conceive of cities via visual effects in the past, he’s usually had historical photos, images, or references to work with. “Even King’s Landing in Game of Thrones was modeled on Dubrovnik, so you’ve got a visual logic that works,” he says. “For this, there were a lot of fundamental aspects that were new. So we engaged an architect, Tim Evans, and handed over all of our design templates and key buildings, and then he asked all those planning questions. How many people will live here, and how do these people live? So we had a lot of blue sky thinking about how this society would exist.”

Brave New World‘s real-life architect went off to create a city based on the answers Horton, production designer David Lee, showrunner David Wiener, and director Owen Harris provided, using materials that would be available in the future. “[Tim Evans] designed the layout of the city, and the ancillary buildings, which are then run through our production design department,” Horton says. “And with his team, he modeled all these buildings, the cladding, the footfall, and how people would get around. We were able to give this 125-page document to Industrial Light & Magic, and they were able to build the city really quickly.”

In the series first episode, we get a glimpse of New London via a train. It turns out actors onset that today were greeted to a similar cityscape that viewers would see on their screen months later. “We projected the CG renders of the city onto an eighteen-by-five meter digital screen so the actors were on a virtual ride and could look out the window and actually see the city,” Horton says. “We basically had a couple of months to build and render that. You’d usually have the entire series to do that, but we had to condense that into a small space of time. The template the architect gave us was absolutely essential. ILM said they’ve never been given a more detailed build plan. That’s one of the unique things about our show, the city is a fully built 360-degree environment, so we can put the camera anywhere.”

For the A.I., Horton and his team utilized a company called Territory, based in the U.K, that worked on Steven Spielberg‘s Ready Player One. Because so much of Brave New World revolves around believing that the world has been created by the A.I., the technology in the show can’t just look like a more glitzy version of what we have today. “It couldn’t just be an extension of iPhones today,” Horton says. For sequences in the series that showcased, among other things, a time-lapse of old London being covered in vegetation, as well as the esoteric dream sequences in the first season, the Spanish company D. Bond was brought on board. For the Savage Lands, Horton and his Brave New World collaborators turned to a company called FuseFX, as well as Digital Domain in India, and Incessant Rain in Nepal. It was truly a global effort.

Then the pandemic hit.

“We’d only delivered three episodes when we went into lockdown due to COVID-19, so we had to move all our artists, maybe 250 of them, to their homes and get them working within about two weeks,” Horton says. “We still had to deliver something like 1800 shots, which we managed to do on our original pre-COVID schedule, two weeks before the premiere. Artists have wanted to work remotely for a long time, we knew it was achievable, but studios understandably worried about cost and security. Now, though, that there was so much money at stake there was no choice, and it ended up driving so many technological advances. There’s a huge percentage of the industry that won’t go back because it worked. Seven episodes were done from everyone’s bedrooms, and it looks incredible. You couldn’t get a more complex show in terms of CG to stress test this new and innovative way of working.”

Tom Horton is scheduled to give a masterclass at the MPA Film Workshop, in partnership with the Tokyo International Film Market (TIFFCOM) and Digital Hollywood University (DHU), in November.