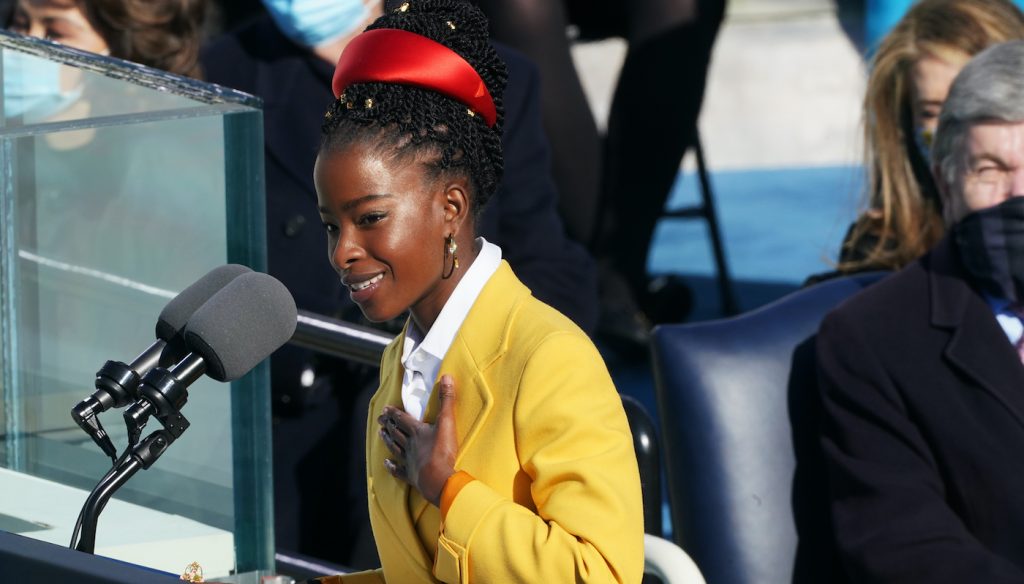 Stars New and Seasoned Shine at the Inauguration

Today’s a new day in America. President Joe Biden and Vice President Kamala Harris are already hard at work on the many, many massive issues facing the nation, but yesterday, in what felt almost surreal after four years of chaos, the country was treated to an epic display of normalcy. And not just normalcy, but also the more potent elements that make normalcy possible; hope, joy, and a shared sense of duty to look out for one another. The inauguration of Joe Biden as the 46th president of the United States, and the historic ascension of Kamala Harris as the first female Vice President, the first Black Vice President, and the first Asian American Vice President was a day that felt almost impossible just two weeks ago. When Harris raised her right hand and was sworn in by Supreme Court Justice Sonia Sotomayor (another history-maker, the first Hispanic and Latina member of the Court), January 20, 2021’s momentous relevance was brilliantly, exquisitely apparent.

The inauguration was also a showcase for superstars, both seasoned and sparklingly new, to help us savor the history being made. Two weeks after the Capitol was being smashed, stormed, and befouled by a mob of traitors, there was Amanda Gorman, a name you likely didn’t know before yesterday but sure do now, the youngest inaugural poet in history, delivering “The Hill We Climb.” Gorman captured the moment in verse in a poem she struggled to write, but then finally grasped and wrestled into being, only hours after the traitors had hunted for elected officials in the halls of the Capitol. How special, and different, was yesterday? Millions and millions of Americans suddenly not only cared about poetry but were enthralled by it. Moved by it. Stunned by it. Here was the radiant 22-year old Gorman, a native of Los Angeles, synthesizing our dizzying, heartbreaking recent history in a language that felt forged by a wizened poet laureate many, many years older than the young woman on stage. If you weren’t able to catch it yesterday, it’s worth it to just spend the few minutes and watch Gorman’s address. It’s literally dazzling.

Gorman was the newest star to grace the stage, but there were more. Lady Gaga performed a robust National Anthem, accompanied by the United States Marine Band. J. Lo was on hand to sing “This Land Is Your Land,” and later, Garth Brooks delivered a rendition of “Amazing Grace.” Again, that all of this was happening at the very sight where mobs had defiled the entire notion of democracy only two weeks ago was surreal. It was hard to hold onto the competing images in your head, but those disparate sights and sounds, the disparate emotions of 1/6 and 1/20, will need to be processed eventually. Synthesized, as Gorman had so brilliantly done. The mob and the miracle of the democracy it hoped to shatter are extreme versions of the same nation.

There was more. A lot more. The peculiar but now overwhelmingly moving rhythms and rituals of the transition of power continued, albeit it in our new normal of masked up social distancing. There were no crowds, as there had been in inaugurations past, be they the modest, like the crowds at President Trump’s 2017 inauguration, or the massive ones that greeted President Obama in 2008. Once night hit, and after President Biden and Vice President Harris did some of the peoples’ work (signing executive orders, welcoming three new members of Congress), there was more music to be had. In a live special led by Tom Hanks, musical stars including Bruce Springsteen, Jon Bon Jovi, John Legend, and Katy Perry belted out songs that, taking as a thematic collective, leaned on visions of light in the darkness. Perry sang “Firework” to a massive display of actual fireworks over the Mall.

By the time the day was just about over, our late-night hosts seemed as giddy and relieved as so many of us did. The day had gone off beautifully. The peaceful transition of power, once not only considered a given but emblematic of our entire form of government, the ritual we tout to the rest of the world as proof positive of our democracy’s vigor and righteousness, has now been reset. We now have to work to make sure the next transition is peaceful.

It would be disingenuous to say everything’s looking up in the United States right now, but after yesterday, it would also be hard to argue it isn’t looking a little brighter.