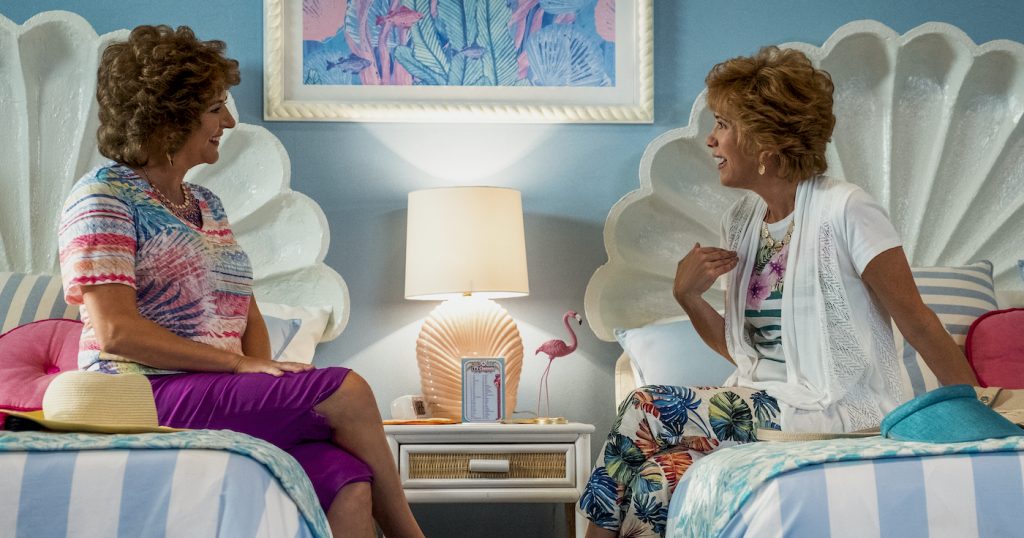 If you ever wondered what a trailer for a Kristen Wiig comedy would look like if it were modeled on Netflix’s juggernaut fantasy/sci-fi series Stranger Things, today is your lucky day. Barb & Star Go To Vista Del Mar‘s new trailer opens with an extremely credible facsimile of Stranger Thing‘s intro, down to the typeface used in the titles and a shot of a kid pedaling on a bicycle. The link between director Josh Greenbaum’s film (written by Wiig and her co-star Annie Mumolo) and Stranger Things more or less evaporates thereafter, but it’s a cheeky way to kick things off.

Wiig and Mumolo know a thing or two about writing hilarious scripts—they’re the duo behind Bridesmaids, after all. Barb & Star is centered on the titular friends (Mumolo’s Barb, Wiig’s Star) taking their first-ever trip outside the Midwest. Their fun-in-the-sun idyll promises to be full of hijinx, romance, and further proof these two are best friends for life. That’s when a villain’s “evil plot” turns their vacation into something else entirely.

Barb & Star Go To Visa Del Mar will be released anywhere you can rent movies on February 12.  Check out the trailer below:

Here’s the synopsis from Lionsgate:

Take a trip and break out of your shell with Barb and Star. From the gals who brought you Bridesmaids (co-stars and co-writers Kristen Wiig and Annie Mumolo) comes BARB & STAR GO TO VISTA DEL MAR. Lifelong friends Barb and Star embark on the adventure of a lifetime when they decide to leave their small Midwestern town for the first time…ever. Romance, friendship and a villain’s evil plot…Hold onto your culottes, BARB & STAR debuts in your home on February 12th!