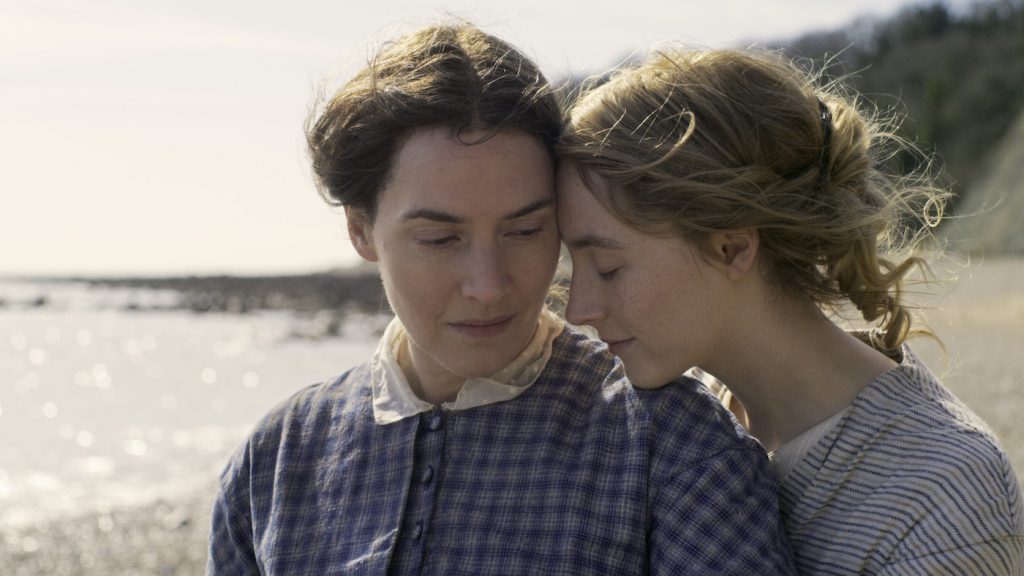 Writer-director Francis Lee’s acclaimed 2017 debut feature God’s Own Country and his follow-up, Ammonite (Neon), unabashedly center on queer, working-class characters. So it may come as a bit of a surprise that Lee cites 1980s studio movies as among his all-time favorite films.

“In my head, when I’m making my films, I’m making my version of An Officer and a Gentleman or Pretty Woman or Working Girl; it just so happens they are slightly different,” says Lee, an actor turned award-winning filmmaker. Horror is his favorite genre — he’s currently working on “a project that will be scary horror but at the heart of it, again, is close personal human relationships, class, queerness,” he says — and counts among the films he rewatches over and over “Carrie, The Omen, The Shining, all the Conjuring movies … I thought Hereditary was phenomenal,” he says.

These movies may seem at odds with the romantic, historical drama Ammonite starring Kate Winslet as real-life British paleontologist Mary Anning who lived and worked on the coast of England in the 1840s. Lee creates a speculative love story between Anning and Charlotte Murchison (Saoirse Ronan), the young, upper-class woman left by her husband in Mary’s at first reluctant care. Gradually, the woman bond as Charlotte becomes fascinated by Mary’s work digging up fossils. They fall intensely in love and Charlotte brings Mary out of her calcification.

The erasure of working-class women, lesbians, and queer people in general from history is a prime motivator for Lee to create these stories. “That was the impetus for [God’s Own Country]; to put characters on screen that I understood but had not seen on screen before — working-class characters that felt truthful; queer characters that felt truthful to me. That’s how God’s Own Country and Ammonite came about,” he says. “When I first read about Mary Anning in 2017, I was struck by this working-class woman born into a life of poverty, with little to no education and, through her own determination, ingenuity and the need to survive, somehow rose to be one of the leading paleontologists of her generation. That personally resonated with me and really made me want to delve deep into her story and her circumstance.”

It’s personal for Lee because his own working-class upbringing in rural Yorkshire in the north of England didn’t provide him with the tools early on to pursue his dreams of directing films. “I didn’t have a fantastic education and obviously I didn’t have any financial privilege. I always knew I wanted to write and direct but I didn’t have the confidence to put my hand up and say that and secondly, I didn’t know anybody from my background who had done that,” he says. Acting school seemed within reach. “Acting felt like an option that you could make work for yourself. I understood that you went to drama school, you graduated, you got an agent and you got work and I’d seen people with backgrounds similar to mine be able to do that. But I have to be honest: I don’t think I was a very good actor. I think I was lucky and I did work a bit but I don’t think I was very good and I got frustrated with it. I wanted to write and tell my own stories.” Lee gave up acting and worked menial jobs to support himself while he wrote his script for God’s Own Country.

During his acting career, Lee had a role in Mike Leigh’s 1999 Topsy-Turvy which allowed him to observe how the renowned director worked with actors. “I took away from him this idea of building character, how you develop a character in a three dimensional way although my process is different. I am a scripted filmmaker,” says Lee. “I don’t like improvisation. Everything onscreen is written down whether it’s a physical activity, a look, a gesture, a line of dialogue, where Mike is all improvisation.”

That way of working can be daunting to actors but Lee had no problem attracting Oscar-winner Winslet and Oscar nominee Ronan to Ammonite.

“I’d never want to employ a stunt double or a hand double,” says Lee. So “part of Kate’s research for weeks and weeks and weeks was to fossil on those beaches where Mary Anning lived and worked. She worked with a fossil expert and she became incredibly good at it; she has a good eye, she was brilliant with all the tools,” he says. “On the flip side, she also got incredibly cold and tired and hungry and wet, and that informed her physically and emotionally of how Mary would be in those circumstances.”

Lee worked closely with cinematographer Stephane Fontaine to achieve a distinctive look for Ammonite. “Stephan has shot some of my favorite movies. I am a huge [Jacques] Audiard fan; A Prophet is one of my favorite films. I loved his work on Captain Fantastic and Jackie. I don’t understand anything technical with cameras; I don’t understand lenses … I do understand lighting and framing and how to tell the story with pictures,” Lee says. “Stephane and I plotted the look of Ammonite so carefully in terms of lighting. At the beginning of the film, Mary is closed off and she’s living in that little room with her mother and it’s cold and gloomy, there are shadows in the corners, and they can only afford one candle. Once Charlotte comes in and their relationship develops, very subtly the light shifts. It starts to get warmer; they start to get more light, they have a paraffin lamp and more candles. Charlotte brings that warmth into that space and when she leaves, we took out the light again. We made it dark as a reminder to Mary that this thing that made her life better is gone.”

Lee now counts Winslet as a good friend and says it was very gratifying that she, Ronan, Fiona Shaw, and Gemma Jones (who have substantial supporting roles) wanted to work with him. “They are all fantastically more experienced than I am; this is just my second film,” he says. “It felt like a massive honor that they would trust me to orchestrate and shape their performances. I will never underestimate how wonderful that was.”

Neon is releasing Francis Lee’s awards contender Ammonite theatrically on Friday (November 13) in the US followed by the company’s first PVoD (premium video on demand) release on December 4.