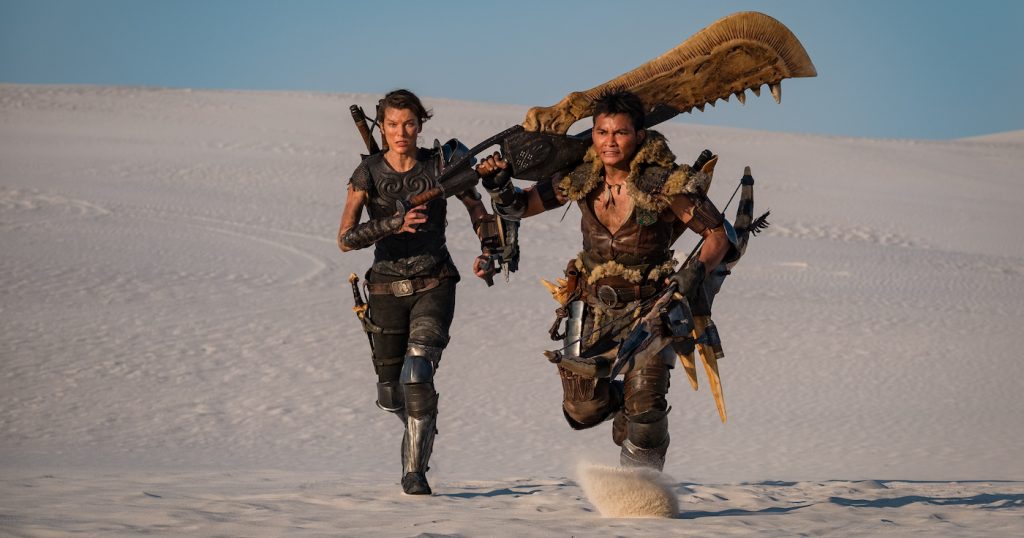 If you were asked to place a bet on either Milla Jovovich or some seriously massive and angry monsters, where would you place your money? Yeah, us too. Jovovich is one of the great action stars of her generation, and she’s back to kick butt—in this case, monster butt—in the first official trailer for director Paul W.S. Anderson‘s Monster Hunter. Jovovich and Anderson go back a long way, having worked together on the Resident Evil franchise, where they honed their monster action bonafides. In Monster Hunter, based on the very popular video game, Jovovich plays Artemis, a no-nonsense captain leading a crew United Nations military personnel, a group of very capable warriors, mind you, who stumble upon a world beyond our own in which monsters are real, and their firepower won’t do squat against them. The film is now slated for a December release, a surprising reveal considering it’s the rare film that’s been moved up. (It was originally due for an April 2021 release).

Jovovich has good company in Monster Hunter, including T.I., Meagan Good, Diego Boneta, Ron Perlman, and Jin Au-Yeung are all on hand. Anderson’s film comes from a script he co-wrote with Capcom’s Kaname Fujioka, one of the creatives from the original game. The trailer gives us a good idea of what we’re dealing with here—an old school monster epic that’s meant to be enjoyed with a mouth full of popcorn. We could all really, really use some good old fashioned fun, and Monster Hunter looks like it promises that and more.

Monster Hunter is set for theatrical release on December 30. Check out the trailer below:

Behind our world, there is another: a world of dangerous and powerful monsters that rule their domain with deadly ferocity. When an unexpected sandstorm transports Captain Artemis (Milla Jovovich) and her unit (TI Harris, Meagan Good, Diego Boneta) to a new world, the soldiers are shocked to discover that this hostile and unknown environment is home to enormous and terrifying monsters immune to their firepower. In their desperate battle for survival, the unit encounters the mysterious Hunter (Tony Jaa), whose unique skills allow him to stay one step ahead of the powerful creatures. As Artemis and Hunter slowly build trust, she discovers that he is part of a team led by the Admiral (Ron Perlman). Facing a danger so great it could threaten to destroy their world, the brave warriors combine their unique abilities to band together for the ultimate showdown.