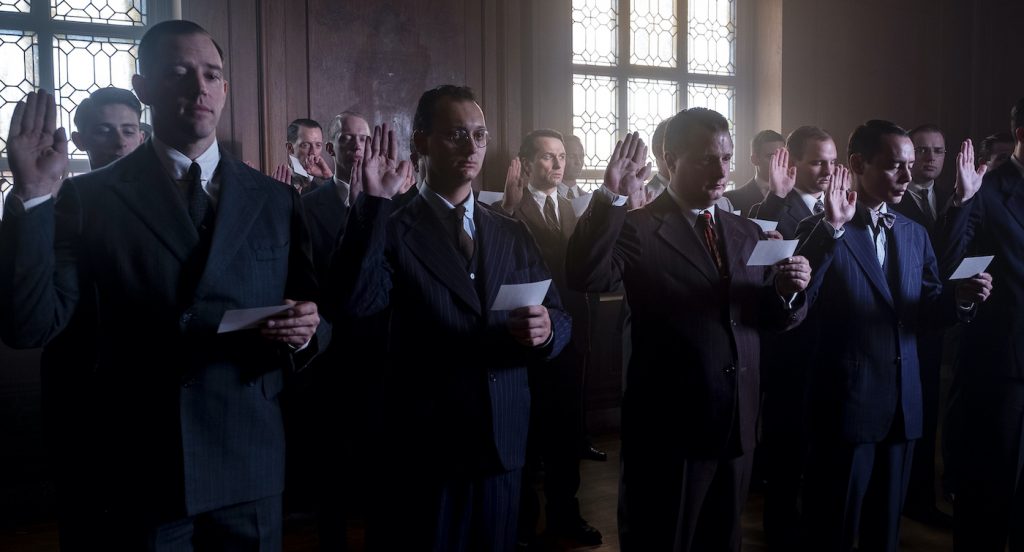 Here are parts I, II, and IV of our deep-dive into how HBO’s Perry Mason finds, outfits, and directs its many background actors.

Even with all of the fitting and other work they’ve done prior to the shoot, before showing up to the set to film, background actors must prep the night before. Women are given sheets of paper with details for setting their hair in curlers (which should be in place when they arrive). Men are instructed to arrive clean-shaven, trim their sideburns, and to leave their hair alone. Hair Department Head Miia Kovero’s barbers will attend to any fixes or adjustments needed, lest someone’s personal barber make things a little too modern. “Women, come with foundation, but no other makeup,” says Makeup Dept. Head Christien Tinsley. “We’ll do your eyes, lips, and cheeks if needed.”

While the crew call time for a day shoot might be 6:30 am, on days where masses of background are working, key second assistant director (2nd A.D.) Salvatore Sutera will find himself showing up as early as 3:30 am, followed soon after by the Costume, Hair & Makeup teams, and, by 4:30 am, the background actors themselves. “There’s a whole Ford factory of things that have to happen before call time,” he notes.

Calculating the amount of time needed to dress and groom the background, even for someone as seasoned as Sutera, is not an exact science. “It can take anywhere from about 40 minutes to over an hour for the average person to get ready. Though on Radiant Assembly days, it would take upwards of 3 ½ hours to get that massive amount of people ready,” he says. “Men get ready quicker; women take a little longer, because of the hair and makeup aspect.”

An out of work farmer or low-income immigrant character might just need 20 minutes to get ready, just to get their shaggy costume on, no makeup, barely anything done to their hair, compared to a lawyer or upscale female shopper, who got spruced up nice to go out on a day for some shopping with a girlfriend.

Upon arrival, the background actors are checked in by the assistant director team and given paperwork, before being sent on their way to begin the prep process. Principal cast and background are dressed and made up separately, the former in more comfortable, private dressing room trailers, the latter usually in large tents. And while the various departments’ tents can often be set up in the main Base Camp (where other dressing rooms/trailers, offices, catering, etc. are located), for larger groups, like Radiant Assembly days, they are sent to a specific Background Base Camp. “In that case, we actually lucked out,” says Sutera. The location for the church interior was actually at a theater building in downtown L.A., and our Locations Dept. managed to find a parking lot right across the street, where we set up that Camp. Then they just needed to walk across the street to the set.”

There’s no guesswork when it comes to figuring out the sizes and setup of those tents, it’s all in the math. Costumes can calculate their tent requirements based on the number and size of countless racks of clothing (often loaded in the day before), plus the several changing areas, for both men and women. There is also a review area, where costume designer Emma Potter can see a lineup of extras and “walk the line,” making any last-minute changes she might see necessary.

For makeup, one makeup artist can typically handle 15 background actors in a two-hour window.  “So if we have 300 background, I know we’ll need 20 makeup artists that day,” Tinsley says.

The sizes of the teams themselves, again, varies by the number of background actors being processed in a given day. For Wardrobe, Potter has a pair of Key Costumers, Angela Nunez and Emilea Rivera, who liaise with her Costume Supervisor, Misty Halliday, to figure out the size of their team. The term “Costumer” covers a lot of bases, Potter says, working directly with the background actors as fitters and shoppers and helping get clothes ready for the workday. “But on those really big days, like the City Hall steps, we’ll have nearly everybody there,” Potter says, “because there are so many people to get ready in a short amount of time.”

Kovero will have as many as 20 hairstylists on such a day. There are also three to five barbers there, to touch up men’s hair – and keep it looking consistent from day-to-day.

Tinsley’s Makeup team consists of a Key Assistant, Corinne Foster, Additional Makeup Artist Steve Costanza, who functions as the Background Key, and then, on City Hall day, ten other Additional Makeup Artists.  [One such “Additional” was Kevin Westmore, grandson of Monte Westmore, one of the legendary family of Hollywood makeup icons.]  “We work way in advance booking these people, because some makeup artists might be available one week, but maybe not the next two weeks,” Tinsley explains. “So we try to build our schedule far enough in advance that we can book people and have consistency. If you have a new makeup artist coming in every day, they have to learn the process. But if you can get the same ten makeup artists for three weeks, they all have it down. They know the look, they learn the color palette, they know what I’m looking for.”

“Our wardrobe was set up for us. You’re given a number, and if, say, mine is No. 100, I’d go look for No. 100, and there would be my outfit for the day – freshly laundered and pressed, ready to go,” says background actor Jake Tappan. Background actors who work regularly, like George Zaver, might have two or three different costume setups. “Because I worked a lot,” he recalls, “I had my own closet in the tent. And, because I appear on more than one day of the story shoot, I have two or three different outfits, just so it doesn’t look like the photographer has no other clothes! And they would say, ‘George, you’re wearing Costume B today.’”

Once everyone is in their costume, 10 to 20 would line up and allow Emma Potter and her team to give them a final once over. “There’s always something you want to tweak or something you notice that you weren’t really aware of beforehand, that you want to adjust,” she states.

After dressing and grabbing a bite to eat, background actors would then proceed to Hair, men getting the aforementioned hair adjustment if needed.

Tinsley’s makeup crew would arrive at 4:00 am, taking a half-hour to set up, before beginning work on background actors. “They’d roll their equipment in, get it unpacked,” he describes. “Because remember, we’re normally moving locations, so it’s rare that we’d be at the same location for three or four days at a time, where they can just leave their equipment.” Crew call is 6:30 am, so that would leave the two-hour window for makeup to be completed, “Though they might not need all of the background actors for the very first shot, so, if possible, we ask production what they need, and that might give us a little extra time to work on the rest. I might see someone and say, ‘You know what?  Let’s change this person’s color. I don’t like the color of their lips,’ or, ‘Break down this person, make them look a little bit more disheveled than they are right now.’ Then, once you start to establish an idea and feel, they catch on.’”