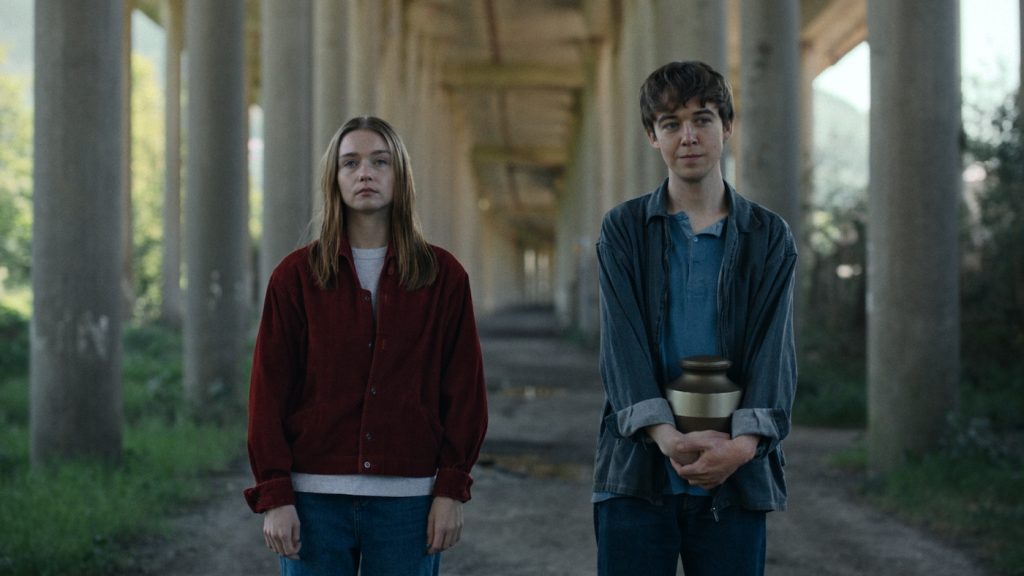 Netflix’s The End of the F***ing World is based on Charles Forsman’s graphic novel, is a beguilingly beautiful, darkly comedic series. Adapated by Charlie Covell, the story follows two teen outsiders with different ideas about their relationship. James (Alex Lawther) believes he’s a psychopath, and while he agrees to go on a road trip with Alyssa (Jessica Barden) to find her father, his real plan is to find the perfect time to kill her. Yeah, it’s dark, but the good news is that James never follows through. As they pile up the mishaps on their cross-country drive through England, James finds that he likes Alyssa too much to hurt her.

For the second season, cinematographer Benedict Spence helped create a rulebook to ensure that The End of the F***ing World kept its focus where it matters—on the characters. Taking a minimalist approach first applied by Forsman in his graphic novel and expanding upon them with director and frequent collaborator Lucy Forbes, Spence delivered episodes that looked clean, honest, and simplistic enough to approach abstraction. These choices help the show pack an emotional wallop (there’s a reason the series has such a fervid fanbase) and helped Spence earn himself an Emmy nomination for his work on episode two.

We spoke to Spence about how less is often more when it comes to cinematography, his work with director Lucy Forbes, and how creating strict rules for the show’s aesthetic allowed him to be more creative.

Congrats on the Emmy nomination! Can you walk us through your nominated episode?

To describe the episode, it’s essentially one big long montage. Which is a joyous thing to be able to shoot. You’re doing tiny little sections, and you can throw creativity at each one. Different times of day, different weather, all these different shots tied into one long dialogue scene. This is the first time we see our heroes Alyssa and James from the first season. The writing is brilliant. Charlie Covell is an absolute genius, she’s so smart. The first half is Alyssa’s side of the story, and the second half is James’s side of the story, including one scene where they meet for the first time and we see it from both angles. That was a fun thing to do. Even on the page when you’re reading it, you feel like it’s a really fun way of arranging things. People love the show. This is the first time I’ve worked on a show where there’s a real fan club for it, so that first meeting scene had a lot of pressure from the fans. It’s not something you want to take into consideration, but you can’t help not take it into consideration.

How many visual cues did you take from Charles Forsman’s graphic novel?

The graphic novel is amazing in its simplicity. It’s minimalist to an extreme. Line drawings, black and white, little squares, it’s great. The first season definitely gave a big nod towards that, and that’s something I wanted to continue.

In the second season, we didn’t really have any scenes from the graphic novel. The first season ends where the graphic novel ends, with James getting shot. So there was no direct scene-by-scene comparison to be had with the graphic novel. However, tonally, the minimalism, the starkness of it, that continued. So the show is minimalist almost to the point of abstraction. There aren’t many props, there’s not a huge amount of dialogue, it’s stripped back and stripped back and stripped back. In terms of the cinematography, that’s something director Lucy Forbes and I wanted to continue in how we shot it as well. So Lucy and I came up with a number of rules as to how we’d shoot the series, and a lot of those rules are based on this absolute minimalism.

Can you walk us through the rules?

I’ve got a twenty-page rulebook [laughs]. I’ll give you a few parts. There’s obviously the centralized framing, which they did in the first season and is also taken from the graphic novel. Everything is bang on the crosshairs, centrally framed. It’s quite nice in the way that it isolates a person in the space. We almost never tilted the camera. Close-ups don’t exist. We don’t have any establishers, we don’t go over the shoulder, it’s always clean singles. We minimize our camera operating, so it’s locked off almost the whole time. I find myself going, ‘I really want to pan the camera,’ but we’re locked. It looked like I was lazy on the shoot, but I definitely wasn’t!

These rules were never meant to hinder us, but actually what they do is increase your creativity in a way, because you’re setting all these boundaries that you have to operate within, but you can really dig in. So as well as giving a quite strict visual style, they also allow you to play within those boundaries, which is fun to do. Shutting off a lot of options in some ways allows you to really focus on the lighting, or the performance, you’re not thinking about doing a really cool angle.

Aside from the aesthetic look and feel of the show, how else do these rules serve the show?

In the most basic sense, it’s a time and energy thing. Especially on a show like this, you’re limited in time and budget. So by getting rid of lots of different options and the flashy things you can do means you’re actually spending your time and energy more wisely. You get a couple more takes out of the cast rather than fussing around with cranes and things like that. For example, we only shot on three lenses across the whole series, and they were in the middle of the range. You know you’re not going to shoot on a really long lens or a really wide lens, so you can put a bit more thought into other things.

In terms of playing with the rules, a good example is the central framing. There’s a couple of times where James and Alyssa sit at opposite ends of the frame of each other, and we’re centered on the space between them. People are watching the show and 90% of the shots are centrally frame on a person, so when you put that central framing on a space in the middle, that’s a fun, creative rule where you can use that rule and twist people’s perceptions a little bit.

I imagine these rules also give the performers more time?

Absolutely. There is a battle of time on set. Schedule is everything. I’ve done jobs where I’ve had no time at all and have had to rush through things horribly. As the DP, the reason you show up on set early and know what you’re doing is so that the cast has more time, the director has more time, and then I have time to do little extra tweaks. Will the viewers miss a fantastic crane shot coming through the window which would take hours to set up? Or, do you think they’d rather see a few more takes from the cast? Ultimately that’s why we’re all there, to get the cast’s faces on the cameras doing the acting.

The End of the F***ing World season two is streaming on Netflix.

TAGSCinematographer Interviews Netflix The End of the F***ing World