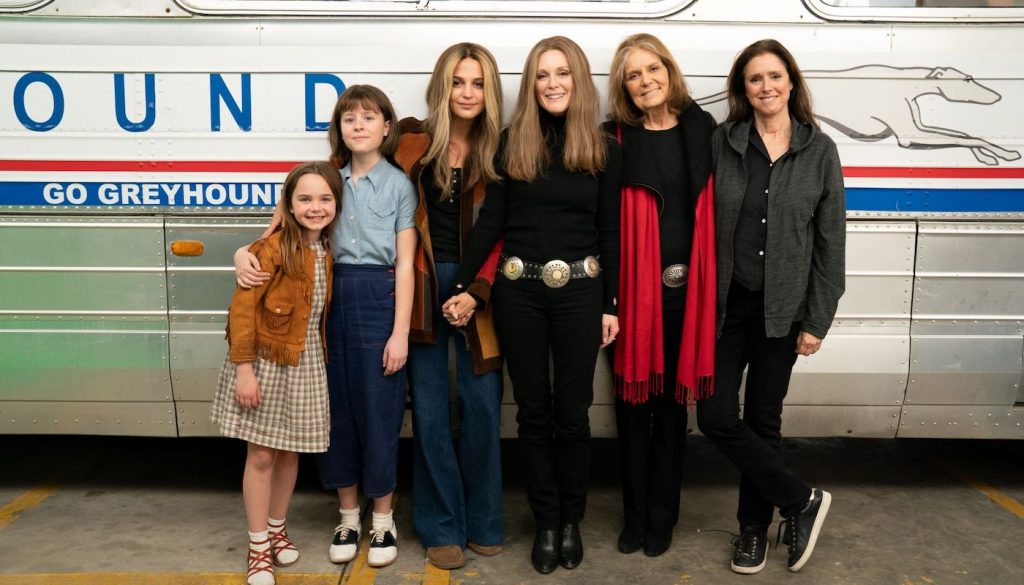 Director Julie Taymor’s latest feature, The Glorias, celebrates the life of a living icon of our time, Gloria Steinem, but she tells Gloria’s story in her utterly singular way. The director uses four different actresses to represent the famed women’s rights activist at different times in her life. There are imaginative, surreal sequences that express Gloria’s inner dialogue. There’s a sort of metaphysical bus, which carries Gloria through her journey, sometimes accompanied by her older or younger selves (played in the film by Ryan Kiera Armstrong, Lulu Wilson, Alicia Vikander, and Julianne Moore). The film, co-written with Sarah Ruhl and based on Steinham’s book “My Life On The Road,” captures the passions and pursuits of its iconic namesake in Taymor’s inimitable style. The Glorias is available for purchase on Digital and Streaming exclusively on Amazon Prime Video starting September 30th.

Taymor discussed The Glorias with The Credits, its multi-perspective conception, and how the release of this film couldn’t come at a better time.

The Glorias centers on the iconic leader in women’s rights, but there are other important figures in the movement represented too.

I really wanted to tell a story where you saw women supporting women. Gloria is a beautiful woman, with many men in her life, but it wasn’t about the men. It was about the women she worked with. We never see movies about women that don’t focus on the relationships between them and men, or sexual relationships. This is not about that. This is about the joy and the anger and the fight for women’s equality, in every way, with their bodies and their brains. As Flo Kennedy says, ’There are very few jobs that require a penis or a vagina. All others are open to everybody’. There are so many wonderful women in this movie, like Janelle Monâe, Bette Midler, Lorraine Toussaint, and Kimberly Guerrero, who plays Wilma Mankiller. I’m very passionate about not just Gloria, but the women who make Gloria who she is.

How did you envision people reacting to the rich tapestry in your film?

Gloria is the main character because she wrote the book “My Life on the Road,” but she is a composite of all these women of color, and social strata, and sexual orientation, and the men who are in there as well, because there are some terrific men in the movie, too. I’ve found that men have loved The Glorias equally if not more than the women because they don’t usually get that inside look into a room of editors at a women’s magazine, or so many other examples of women empowering each other. The men that I know who have seen it just love that, and want to bring their daughters. Of course, young men should see it too. We have to show women in positions of leadership, and really doing well, and fighting the good fight. We especially need that right now, and I feel like The Glorias couldn’t be more perfectly timed or more relevant than it is today.

In the surrealistic scenes, you leverage archetypes and wish fulfillment, but they are also anchored in a feminist perspective. Can you speak to that?

I think the one scene that is the most surreal, which is the transition between Alicia Vikander’s 38-year-old Gloria to Julianne Moore’s Gloria, who is the one who starts Ms. Magazine, is a great example. Here you’re seeing Gloria grow from being someone who is silent when she is confronted with a sexist statement, to the Gloria that puts a smile on when she gives an answer, yet is never really offensive or aggressive in it. I wanted to deal with the notion that if someone says something sexist or racist to you, quite often women won’t answer. They’ll just smile because they’re afraid of being thought of as a b*tch, or ballbuster, or as we all know, a ‘nasty woman.’ I wanted to do a scene where we got to see what was going on behind the smile, and behind the eyes and soft tones, and let her mind explode into a fantasy which is this tornado, inspired by The Wizard of Oz and by all the images of witches.

Think about how often women are called insulting names like AOC was recently. We are so often being called a witch or b*tch. Think of how easy it is to label a strong woman or a woman who speaks her mind, one of those horrendous words. I did a very playful sequence about that, which is entertaining, but it’s also social criticism. It’s about the kind of uniform that men like to see women wear, whether it’s a Playboy bunny costume, or a nun’s habit, or a burka, which leaves a lot to the imagination. I’m given to these real flights of fancy to show another level of reality, or Gloria’s imagination, but also what women think about when they don’t say what they’re thinking.

How did making The Glorias stretch you as a filmmaker?

This movie was the first time I really used documentary footage. We did so much research looking for inspiration, but then I used it. I learned that in a story that’s based on politics, social issues, and history, if you can use the real thing, sometimes it just surpasses everything else. I felt like if the real people could speak it, we should have the real thing. When we were doing the March on Washington, there was no way I could create those masses of people, and their faces, but what we were able to do, which was a tremendous amount of work by my editor, colorist, and research team, is we found color footage of the 1963 march, and we were able to add grain to our footage, colorize it, and match that, and make it seamless so the audience isn’t aware of the difference.  Also, the use of backgrounds was a real stretch, because we shot 90% of the film in Savannah, so even New York, South Dakota, Oklahoma, and Minneapolis, all that was shot in Savannah. We used extensive amounts of green screen in the studio behind the taxi rides, and because it’s a road movie, we added cars, buses, and all that to the frame. We went to India, which was thrilling, and we shot in those villages and with the women there, and Gloria’s trip to India is one of my favorite parts of the movie, but the rest of it we had to do in Savannah, and that stretched me very much as a filmmaker.

Another icon was in the news recently, sadly, with RBG passing away. Gloria is another inspiration to women, and really anyone who embraces the label ‘Social Justice Warrior.’ What can The Glorias teach people today, and what can we learn from Gloria Steinem’s lack of narcissism at this very divisive time?

We have to listen. That’s one of Gloria’s best traits. She listens. She works from the grassroots up. She hears people, and she fosters gender, social, racial, and cultural lives. That’s what the Black Lives Matter movement has shown us. It’s not just a Black movement, it’s an American movement. It’s a movement of all people working together to uphold this great democracy that this country was built upon. It’s very critical that people see this movie and think of it in light of RBG because she was a warrior for gender equality like Gloria. Gloria would be out there on the streets with the women making the noise, and then Ruth would be there making the laws. You need both. You’ve got to get your voice out there, get your vote counted, and you’ve got to get this country back to what it’s supposed to be. It’s all people, it’s not just red states and blue states. It started with ‘We the People,’ and that’s what it should always be.