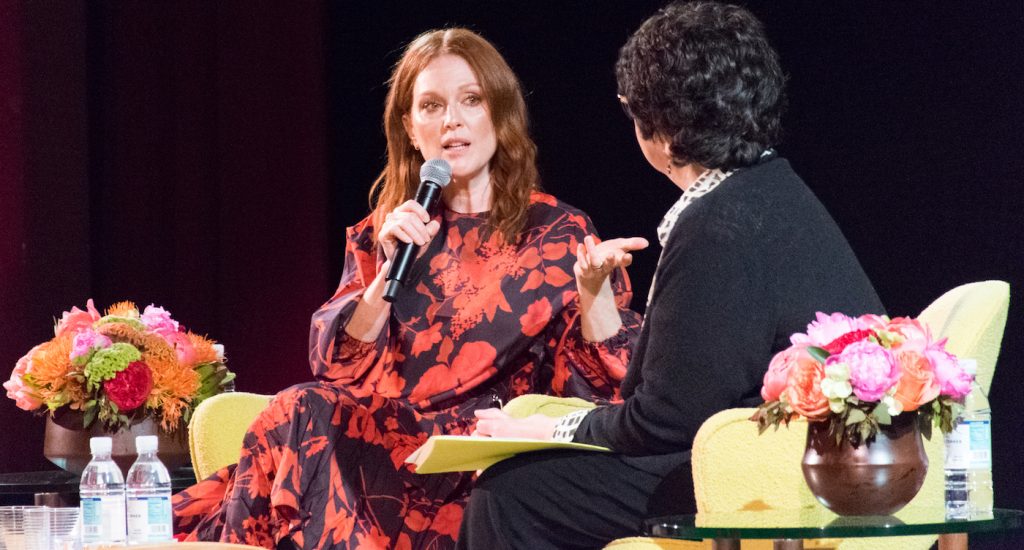 Julianne Moore on Craft, Coming of Age, & Women in Hollywood

At a recent onstage interview with me at the Boston’s premiere art house cinema, the Coolidge Corner Theater, Moore credited Boston with cultivating her adventurous taste in films during the early 1980s while she studied drama at Boston University.

“I learned about movies at these theaters in Boston,” said Moore, who was feted at the theater with the annual Coolidge Award. “That’s why I wanted to come here tonight because I saw Eraserhead here. Everybody was high. This was magical — to get on the T and go to Cambridge and see The Last Metro. I saw a double bill in Cambridge of Straw Dogs and Emmanuelle. I don’t think I realized how much it got under my skin. My expectations for material were so high. When I encountered independent film and started seeing scripts that reflected the movies I’d seen in Boston, it woke me up and things started to change.”

She drew laughter from the crowd with stories of working her way through college at the Up and Up Lounge atop a Howard Johnson’s in Kenmore Square. “I was hired the first summer after freshman year when I decided I would stay and work. I was 19 — underage — but nobody cared then; it was 1980. I worked as a cocktail waitress all through college and was eventually promoted to assistant bartender. Do the bars still close at 2 a.m. here? When I waited tables in New York, I was like ‘Are you kidding me? I gotta keep going to four?”

Moore moved to New York shortly after graduation. Besides acting in regional theater, she was cast on the daytime drama As the World Turns.

Moore was at the forefront of the independent cinema movement in the 1990s when she starred in Todd Haynes’s Safe. Her collaboration with Haynes resulted in one of her indelible blends of nuance and tour de force in her portrayal of Carol White, an ordinary woman suddenly consumed by what she believes are extreme environmental allergies.

“It was miraculous,” said Moore of that time. “People were taking these huge chances with movies we’d never seen before.”

Safe launched a creative partnership with Haynes that later included Far From Heaven, I’m Not There and, most recently, Wonderstruck.

“We don’t have to explain ourselves to each other…he is so smart and tells a story in every single frame. There’s not a word or a beat that’s not meaningful,” Moore said.

An Oscar winner for Still Alice, the constantly working Moore has also won legions of fans for her mainstream movies. Her long resume includes Hannibal, Psycho, and Carrie, so it’s pretty clear she’s a fan of the horror genre.

“I like the devil more than I like knives. I really don’t think there are enough devil movies, I really don’t,” Moore said. “Slashers are scary but psychological horror — any movie where the paranoia starts to pay off — I love that. In troubled times, all those anxieties we experience start to manifest as monsters in our entertainment so I do think they serve a purpose.”

Moore spoke with enthusiasm about two upcoming features. Out later this year will be After the Wedding, her fourth collaboration with her husband, writer/director Bart Freundlich (they met in 1997 while working on his debut The Myth of Fingerprints). Moore stars opposite Michelle Williams in Freundlich’s remake of Dutch director Susanne Bier’s 2007 film which starred Mads Mikkelsen and Rolf Lassgård.

“My husband was hired to do the American adaptation so I watched [the original film] with him and I said [about Lassgård’s role], ‘that’s the part I’d like to play.’ So he decided, why not switch the genders to two women? It made it a much more complicated story…two women who made different life choices who are equally powerful and also equally sure of their own choices so there’s a bit of a power struggle.”

She also just wrapped shooting The Glorias: A Life on the Road directed by Julie Taymor and based on the book by Gloria Steinem. Moore, Alicia Vikander and Lulu Wilson all play the feminist icon at different points in her life.

“It is not a straight-up biopic,” said Moore. “It’s a really cool meditation on Gloria Steinem and the women’s movement. It’s very impressionistic. I read everything I could and watched footage.” She also met several times with Steinem. “She is everything you’d hope she’d be: a true leader and open and tolerant and funny. She’s always teaching in the gentlest ways.”

Taymor is the latest in a string of women directors that Moore has worked with over the years, including Lisa Cholodenko, Rebecca Miller, and Kimberly Peirce. The industry “is changing,” she said. “Not rapidly, but it is changing. A few years ago, nobody even talked about it. We’re 51 percent of the population; we are not a minority. It’s important that women not be treated as a special interest group.”

At the end of the conversation, Moore received a standing ovation as Coolidge Corner Theatre representative presented her with the award, which has also gone to past recipients Meryl Streep, Jane Fonda, and Michael Douglas, among others.

“To be back in Boston, in a theater, in a town this formative to who I am as a human being and as an actor, is extraordinary,” Moore said as she accepted the award. “I truly mean this from the bottom of my heart: thank you very, very much.”