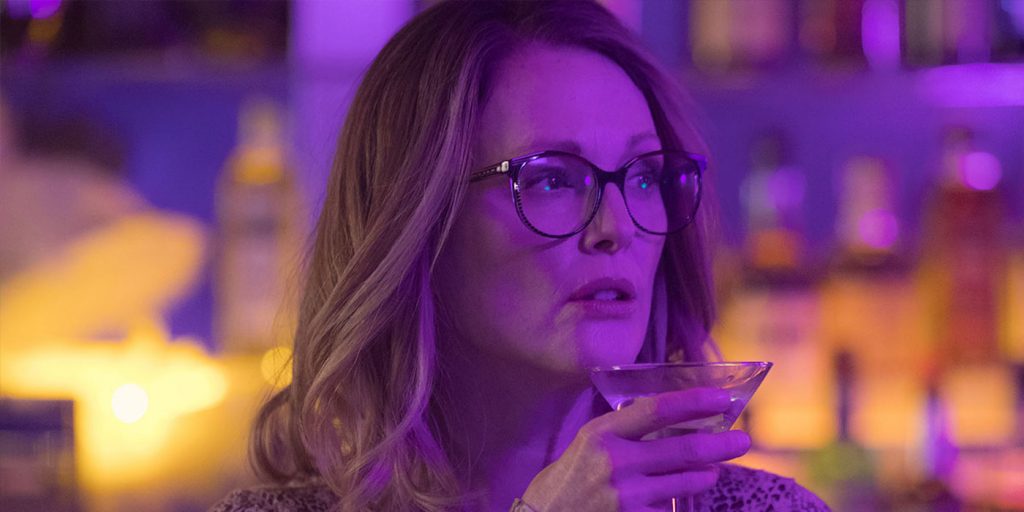 It was Julianne Moore who persuaded writer-director Sebastián Lelio to revisit his 2013 Chilean film Gloria for an English-language version.

“It was quite moving to listen to her talking so passionately about the story and the characters. She had a deep understanding of everything so I was quite moved by that,” says Lelio, whose 2017 film A Fantastic Woman won the best foreign language film Oscar, the first film from Chile to win that award. Toward the end of their meeting, Lelio said, Moore told him she wanted to star in a Gloria remake but only of Lelio directed it. “Then I said, ‘I will only direct if you are in it.’ That is how, naturally, it was born.”

Still, Lelio had some reservations about an American version of his successful Spanish-language film starring Paulina García who’d earned critical acclaim as the titular middle-aged, divorced woman who fends off loneliness and boredom by dancing at a local disco.

“It was a risk because it was easy to get it wrong. There was no guarantee we were going to be able to make it vibrant and alive and with the capacity to resonate again,” said Lelio. He also directed the female-centered, London-set Disobedience (2017) starring Rachel Weisz and Rachel McAdams. “It is a luxury to have the opportunity to revisit your own [characters] and to actualize them and find what’s universal in them and tell the story again with a new center of everything.”

It was also perfect timing; not just for Moore’s involvement but for the social and cultural climate. “Between the first Gloria and Gloria Bell, the world changed; it turned 180 degrees [back] to the middle ages again. Suddenly a story with a woman at the center, a woman of a certain age reclaiming her right to be seen and heard and respected so gracefully, became urgent again and political again,” Lelio said.

Other than shifting the action from Santiago, Chile to Los Angeles, Gloria Bell is the same understated, gently comic story as Lelio’s first version. Moore’s Gloria works in an office; lives alone; juggles relationships with her two grown kids (Michael Cera and Caren Pistorius); ex-husband (Brad Garrett); and independent mother (Holland Taylor). She spends nights dancing at a nightclub that draws an older crowd. That’s where she meets the shy, divorced Arnold (John Turturro) and they begin a romance.

Lelio admits that Arnold is more sympathetic than the character played by Sergio Hernandez in Gloria. “He’s younger than in the first version. John is such a magnificent actor capable of incarnating complex masculinity because he’s someone who is hiding something. [Arnold] has flaws but I think he’s really trying to change. He falls in love with Gloria. He fails, but he’s trying and that’s why I connect with him. Gloria is maybe too much of a woman for him, who knows?”

The movie is a showcase for Moore, and Lelio says he enjoyed the artistic challenge of collaborating with one of the premiere actresses of modern cinema.

“To work with her at this stage of her career — it was a blast. Everything was about [giving the character] more subtleness and refinement. I was enjoying it so much, sometimes I would forget to say ‘cut.’ I was completely hypnotized by her; she is an amazing actress.”

Lelio was also interested in the melding of actress and character. In watching one of the greatest screen performers of her generation make Gloria her own.

“On the other hand, I am interested in grasping with the camera something that is at the intersection of the character and the human being that’s interpreting [her]. I am interested in Julianne Moore interpreting Gloria. That’s what this film is about. It is a love letter to an actress giving an artistic battle before your eyes. She’s someone who has committed her life to this craft and is shining every second. We get to see her going the entire emotional spectrum and somehow succeeding in each little battle and challenge. We love Gloria as a character and we love Julianne because she is capable of overcoming the challenge.”

Like the first Gloria, popular music is central to Gloria Bell, both character and film. Gloria unselfconsciously sings along to radio hits such as Olivia Newton John’s “A Little More Love” as she drives to work. There’s Bonnie Tyler’s “Total Eclipse of the Heart,” John Paul Young’s “Love is in the Air” and, of course, Laura Branigan’s irresistible 1980’s dance hit “Gloria.”

“The songs are doing a commentary about the story we’re watching. It was great fun to find Gloria’s playlist, a romantic repertoire, and find what was coherent to listen to in the context of the United States,” Lelio said. “It’s not a guilty pleasure; it is just pleasure. It was not a cynical approach — those songs, like in the first film, for some reason, I love them. So it’s not like I’m laughing or looking down at them. They are great songs, period.”

The film’s musical component is aided furthered by choreographer Mandy Moore. She and Julianne Moore worked to create Gloria’s free-spirited moves on the dance floor so they are entirely her own. “Mandy and Julianne did a great job creating these unique dance steps that she loves, especially for the dance at the end. It’s so expressive and they reveal so much about where Gloria is, emotionally and spiritually, at the end of the film,” Lelio said.

“For me, Gloria Bell is like a hidden musical film; music invades everything,” said Lelio. “Gloria is either dancing, singing or listening to songs and those songs are bringing emotion and feeling to the film but the lyrics resonate with Gloria’s process, just like a musical. That’s why it works. It’s almost like a Greek chorus.”