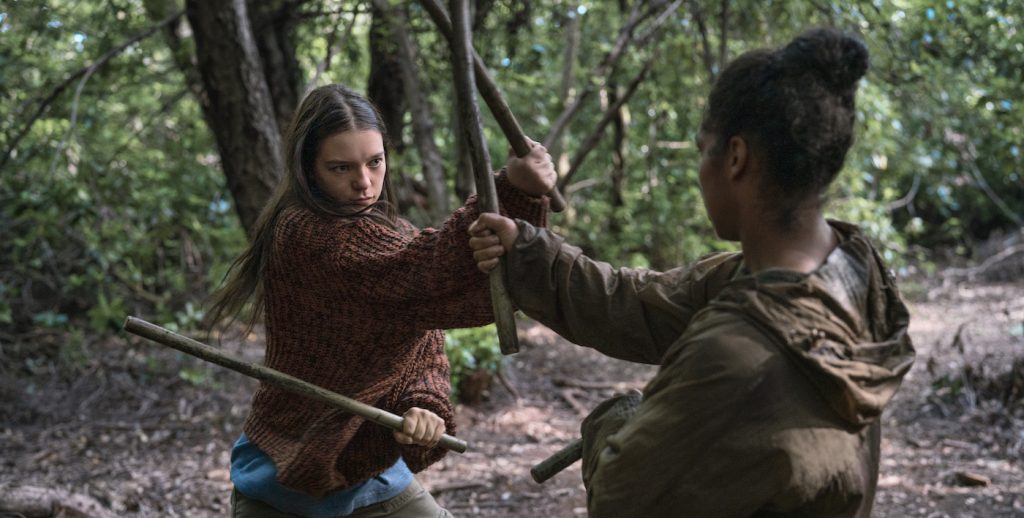 Hanna editor Morten Højbjerg cut the first two episodes of season one of creator David Farr’s relentlessly action-packed Amazon series, which was adapted from Joe Wright’s 2011 film (which Farr wrote) that starred Saoirse Ronan in the title role. In the series, Esme Creed-Miles takes over for Ronan as the titular young girl with a certain set of extraordinary skills not usually found in youngsters. Instead of planning sleepovers, doing homework, or arguing with siblings, Hanna is a forest-raised young woman who counts among her antagonists an off-book CIA agent and, in season two (two episodes of which Højbjerg also cut), a pesky drone.

“That film was definitely one of the reasons why I got attracted to the project,” Højbjerg says. “The thing is, it’s never interesting or very rewarding to copy something that already exists. Especially for a guy like [series creator] David Farr. So I think the opportunity here was to really expand the universe when you have these extra hours of drama instead of a compact feature film.”

Højbjerg revealed that Farr actually conceived of Hanna as a TV series before the feature film. But back in 2011, there weren’t as many options to make a show like this. Yet even by today’s standards, Hanna still stands out. The action is brilliantly conceived, executed, and cut. This action often involves women, especially Creed-Miles’ resourceful, tough-as-nails Hanna. And beneath the surface, there’s a surprisingly tender drama.

“It’s not just a thriller,” Højbjerg says. “Of course, the main engine in terms of the pacing and how it flows on the screen is a thriller, but underneath that, there’s this coming-of-age story, identity questions, and a lot to do with daughters and mothers as well. So much of it is from a female perspective, and I think it’s amazing and something we need a lot more of.”

Højbjerg’s job is, in essence, to get inside Hanna’s head. “Something I think about a lot when I’m working on this show is that it’s so much about identity,” he says. “I’m kind of in that headspace of Hanna. For her, it’s not about the action and the thrills and the drama—all that stuff kind of happens to her—for her, it’s about finding herself and finding out why she’s different from everybody else in this world.”

Editors absorb more of a given series or film’s story than any other member of the crew, save for perhaps the director.  Everything that everyone on set has done ultimately flows through them. This presents a mammoth responsibility, but also opportunities galore to help shape the story. “When you’re looking from the outside, you look at the job of editing as the physical editing,” Højbjerg says. “You tend to classify the job of editing as the actual edits you can see. But what you tend to spend your time on, I think, is that you’re the channel of all these elements, from a crew of sometimes hundreds of people who are all brilliant in one specific thing. Whether it’s the cinematographer or costume designer or set director, everybody is doing one little piece of the puzzle, and you and the director are the only people in the process that gets all of that work, sometimes years of work, and you have to filter it and channel it somehow and organize it as well. You’ve got to make all these decisions, it becomes much more of a re-writing process, I guess, then an actual, physical cutting job.”

For an aspiring editor, Højbjerg says what you need to know is your job is very much about asking questions. Why is a character doing this instead of that? Why is Hanna going out that door? Why is she looking at this person in this way? “Sometimes, if the answer is because it says so in the script, then you know that it’s not valid, that something’s wrong,” he says. “You need to find the answers. Then the actual cutting of a scene, that comes naturally, but it’s a second thing from all the thinking and question-asking that editing is actually about.”

One of Højbjerg’s challenges in the series is cutting scenes that have unfinished visual effects. He refers to these scenes as the infamous blank piece of paper that faces every writer at the start. “In the second season, first episode, we had Hanna and Clara (Alba Paredes) in the forest being chased by a drone. And the drone didn’t exist,” he says. “They shot Hanna and Clara in the elements, running and trying to hide from the drone, [filming] clean plates of sky and trees and different camera movements. At that point, no one knew what this drone would look like. That’s something we invented while editing.”

How’d an editor with no visual effects software, or training, invent a drone? By using sound. “You can sound design your way out of a lot of problems. Especially here, when you have to build a sequence that’s supposed to be really suspenseful and scary and you have the whole half of the scene missing, you can start playing with sound effects,” he says. “So in your head, you think maybe [the drone] is this size, so then it can go a bit low to the ground because if it’s too big it would have to stay above the trees, which would be boring. So far, so good. Then you start playing with sound to create distance, now it’s coming from left to right, or now it’s coming from the back of the shot towards us, and you can pan up and down with the sound. If you do a good job with the sound effects, it’s almost like you can see the drone when it’s not even there. It’s kind of fascinating I think, how much you can tell the story with sound effects.”

Then there’s the meat-and-potatoes of Hanna‘s appeal, the action. Højbjerg says that for those sequences, an editor is usually working with almost overwhelming amounts of material. “You need a lot of footage because you need to be able to always go to other angles for storytelling and for pace and rhythm,” he says. “What I tend to do is be very intuitive, sort through the material, organize it, and get an overview so you can find other things when you need it. You start by identifying all the good parts. Don’t think too much about why you like them or how they would fit. Don’t chase the results, just keep breathing, and take it easy.”

It might sound like a counterintuitive approach to cutting breathtaking action, but it’s clearly working for Højbjerg and it’s working for Hanna, too.