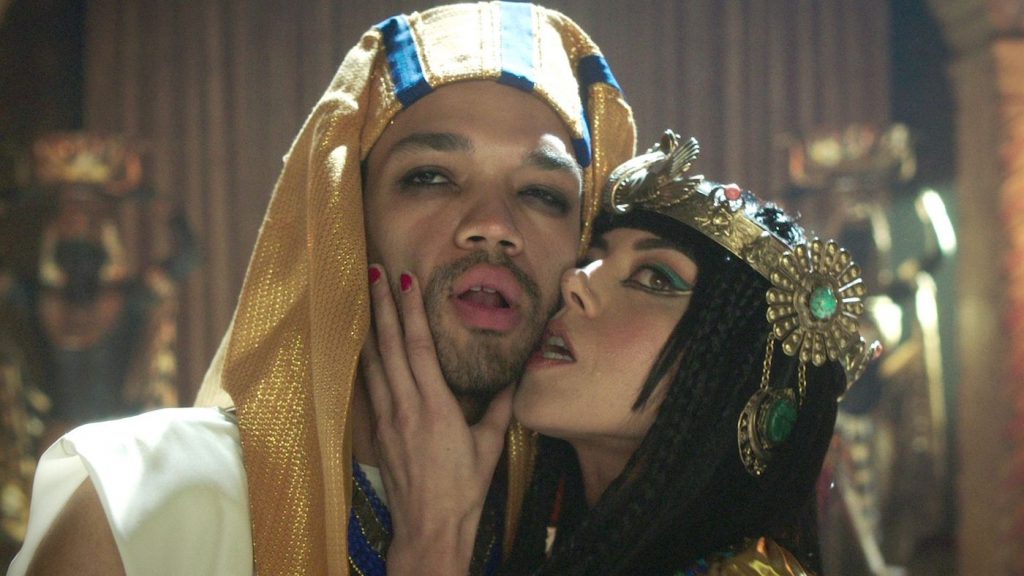 Let’s get the sad part out of the way; Comedy Central’s beloved Drunk History was recently canceled, after 6 glorious, inebriated, compulsively watchable seasons. Shortly before that bad bit of news was revealed, we got a chance to chat with the show’s production designer Monica Sotto, whose work on the season 6 finale “Bad Blood,” which focused on the highly infectious Typhoid Mary (narrated by Jackie Johnson) and Cleopatra’s younger sister, the highly ambitious Arsinoe (narrated by Lyric Lewis), earned her an Emmy nomination.

Sotto is not only a Drunk History veteran, but she also worked in the art department on TV’s longest-running live-action comedy ever, Always Sunny in Philadelphia. In our conversation, edited for clarity and length, she walks us through a day on the set of designing one of TV’s funniest, most imaginative series. (Here’s to hoping it finds a new home—we’re looking at you, any one of the 450 streaming services!)

Always Sunny has this fearless nasty, which is part of the show’s nihilistic charm. But Drunk History has a warmth and sweetness to it.

Yes, it’s prevalent with the Drunk History crew, the Sunny crew is also very nice, of course, but we definitely have this optimism in our storytelling. It’s a really tough shoot schedule the way we have it set up, it’s really similar to live TV or theater because we do a story in a day. Except for this “Bad Blood” episode, usually, if it’s a ten-minute segment we shoot that in all in a single day. So that’s ten sets that are up and down on the same day. I don’t have a lot of prep or wrap. With that aggressive culture, [creators] Derek [Waters] and Jeremy [Konner] make a big effort to stay positive and be nice, and to remember that we’re telling really interesting stories. We like making fun of evil people [laughs]. And the vibe of having a drunk person tell a story is hilarious.

Can you walk us through your average day?

Because every story is unique, one of the easier ways to shoot our show is on location. I’ll start my day in a trailer, which is not normal for an art department. We’re usually at the Disney Golden Oak movie ranch here in L.A., which is a big place for us because it’s so huge and versatile. My first set goes up an hour of half-hour before call, and we just leapfrog, as soon as that set’s approved, we go onto the next set, and the next set, and the next set. The changeovers are very fast between sets. There’s really no time where our art department is ahead. I’m way more present on stage then on other narrative shows. The prep crew, then the shooting crew, then the wrap-up crew, all of those people are the same on Drunk History.

How many sets on average do you have for a given episode?

I’d say about ten. Sometimes all you need is a guy on a phone at a desk. But sometimes they’re very elaborate, 360-degree view sets. That’s good because, for one, we get to have fun with the design, but it also gives the actors and directors a lot of space to play around. We try to have a least one or two big sets per story. It’s a battle, or it’s a big meeting or whatever other crazy stuff that happens in history.

Your Emmy nomination comes for season 6’s most ambitious episode, “Bad Blood.” Walk us through your process for capturing these two very different characters and their worlds, Arsinoe and Typhoid Mary.

For “Bad Blood,” it was one of the first times we played with the format because it was very clear that telling the story of the other queen of Egypt could not fit in a ten-page script. And Typhoid Mary couldn’t really, either. So both of those pieces got two days of shooting, which is a lot for us. We got to move locations and we got to keep our actors a little longer than usual. We still have the ambition of doing it quick and short and being really good at that.

They’ve shot all the drunk narrators and at this point, we’re trying to add in all the drunk footage and distill a workable script with some stage direction and some research in there. So I just do a deep dive. It can be sending PAs to the library and getting books so we can at least get historical etchings or photos, and then throughout this entire time, I’m also talking to the directors as much as possible. For Egypt, Jeremy [Konner] was like, I really like the game Assassin’s Creed for this, because it’s Alexandria at the right time. I was like, ‘Really Awesome!’ I tried to play it and I’ve been a fan before. So we did a lot of screengrabs of that video game and cross-referenced it with maybe more academic stuff. My nose is in the Library of Congress almost every day. I’m trying to refine the design process, and we just try to get as close as possible to what it looked like.

I work with locations and my decorators a lot to keep looking for the right place. For Egypt, luckily we’re in Southern California so we do have movie ranches that are desert-looking, so we were able to do our desert work for a couple of days at one location.

For Typhoid Mary, for me, I’m a big fan of this English Heritage YouTube series that focuses on Victorian Cooking. Mary herself was an Irish immigrant, so I kind of just ran with that, and it was a treasure trove. The cookery, the kitchens, now I knew what the whole vibe looked like.

Massively switching gears here for a second, but I wanted to ask you how do you see the industry changing in terms of representation? Do you feel like it’s changing?

In short, I do think things are improving. I’m lucky that I work with people who are sensitive, who are receptive to criticism and feedback. I see it getting more and more diverse. I think there are more people from different parts of society who are interested in film. I’m lucky, I have great parents who sent me to private school, and that’s a huge, huge privilege because, with that background, I was able to go to USC Film School. When I got there, it was really Caucasian and very male, and if you think of a movie nerd, you think of a nerdy guy, and not necessarily anyone else. But, you can bring it upon yourself to change that stereotype, because I was definitely a movie nerd. I think a lot of the change comes from who’s doing the hiring, who is making the story. So I am excited to see more famous actors and writers who look like me get work because then they’ll determine what kind of crew they want to work with. I do see, at least in production design, more women doing the design role instead of the supporting role in the art department. It’s a glacial pace, but it’s going in the right direction, I think.