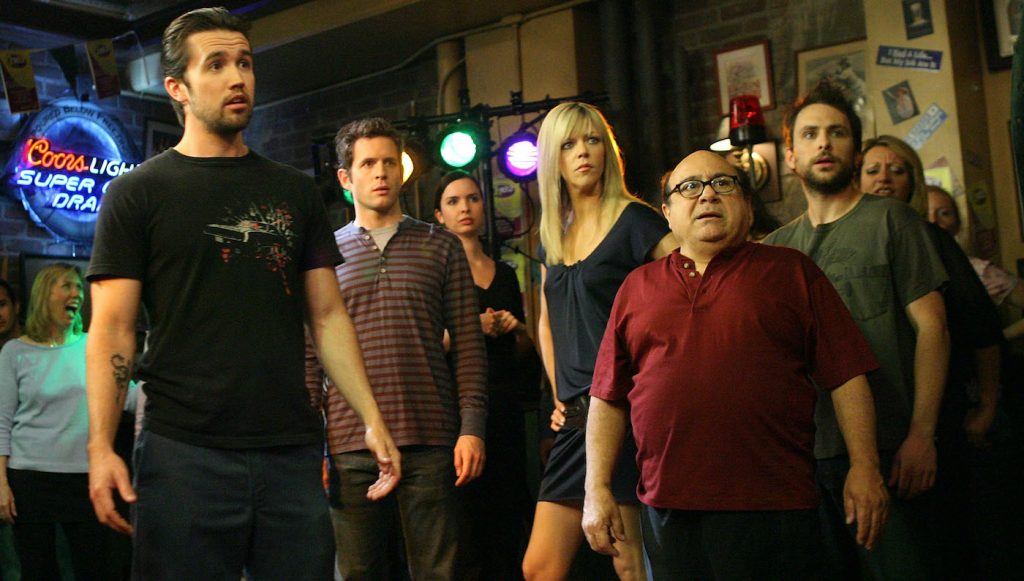 There is some good news to savor on this otherwise bleak post-holiday Tuesday; FX has renewed It’s Always Sunny in Philadelphia for its 15th season, breaking The Adventures of Ozzie and Harriet‘s record as the longest-running live-action comedy ever. Of course the gang made TV history!

FX’s gleefully insane, inane, and yet oh-so-brilliantly written and performed stalwart has somehow, miraculously, remained funny and charming for all of these years. The stellar cast—Glenn Howerton, Rob McElhenney, Kaitlin Olson, Charlie Day, and Danny DeVito—have made history while appearing to have a genuinely fantastic time doing so. For viewers who have been there since the beginning, you could have been forgiven for thinking “The Nightman Cometh,” that season 4 classic, would have been the high-water mark. Nope, they’ve kept on churning out hilarious episodes, year after year after year after year. How they’ve kept the series fresh over the course of the past 4,015-years is truly incredible. Imagining what they’ll do in season 15 with the grim material that is our current reality is, well, at least one thing we have to look forward to.

How long has this show been on? It began its historic run during the beginning of President George W. Bush’s second term. Think about that. August 2005 was when we introduced to Philadelphia’s most dangerous business owners. Aside from DeVito, who’s been a legend forever, the rest of the cast can count the show as their breakout roles, and even as they’ve all done a ton of other stuff since 2005, they’ve maintained this special series and their irrefutably incredible bond throughout.

Obviously, when It’s Always Sunny can actually start production is unclear at the moment, but the writing process has already begun. You can be sure the gang will deal with the world-changing coronavirus pandemic in the worst way possible, making last weekend’s party-goers in the Ozarks look like paragons of social distancing.

If you’ve not yet dipped your toe in his now record-setting comedy, you’re in luck; every season is currently available to stream on Hulu. That’s a lot of laughs you’ve got to look forward.