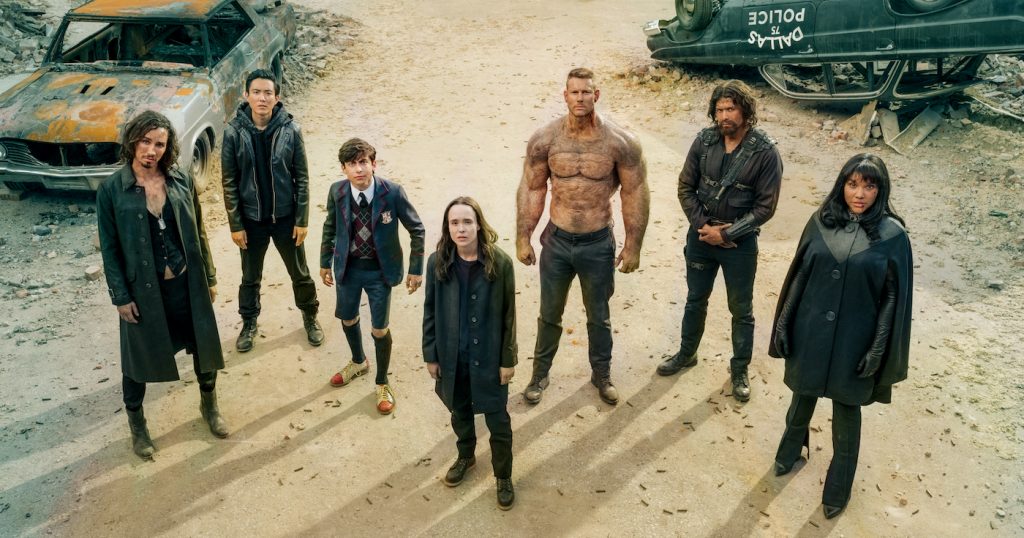 What you need to handle the mid-week doldrums is a shot of The Umbrella Academy straight into your veins. The opening scene to the delightfully bizarre, beautifully constructed Netflix series is available to do just that, and it starts off with a bang.

The opening scene begins with Aidan Gallagher’s Number Five touching down in Dallas. He’s looking for his lost siblings, but the first thing he finds is that the Cold War has gone suddenly hot; the Soviets have attacked the U.S. and, once again, it seems as if the Hargreeves kids have messed everything up.

That’s when the most powerful Hargreeves of them all—Vanya (Ellen Page)—shows up to single-handedly take out Soviet tank missile to the silky sound of Frank Sinatra singing “My Way.” She’s not alone; the entire Hargreeves clan arrives, each with their own bespoke powers, to decimate the enemy. But then things go south. Quickly. Hazel (Cameron Britton) appears to tell Number Five that he’s got to go before the nukes hit. “But what about my family?” Five asks. “You can’t save them if you’re dead,” Hazel replies. True enough.

We’ll leave the way this entire, bombastic sequence ends for you to see. Check out the opening scene below. The Umbrella Academy returns on July 31.

Here’s the synopsis from Netflix for season 2:

Five warned his family (so, so many times) that using his powers to escape from Vanya’s 2019 apocalypse was risky. Well, he was right – the time jump scatters the siblings in time in and around Dallas, Texas. Over a three year period. Starting in 1960. Some, having been stuck in the past for years, have built lives and moved on, certain they’re the only ones who survived. Five is the last to land, smack dab in the middle of a nuclear doomsday, which – spoiler alert! – turns out is a result of the group’s disruption of the timeline (déjà vu, anyone?). Now the Umbrella Academy must find a way to reunite, figure out what caused doomsday, put a stop to it, and return to the present timeline to stop that other apocalypse. All while being hunted by a trio of ruthless Swedish assassins. But seriously, no pressure or anything.