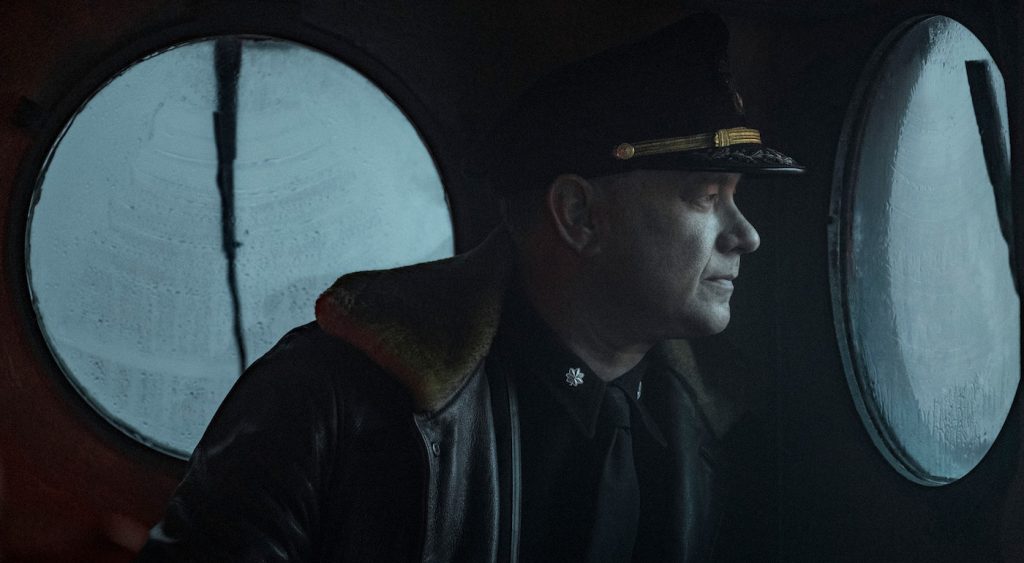 How the Confined Spaces in “Greyhound” Added Authentic Intensity

In Greyhound, Tom Hanks is a naval captain of a US destroyer that spends three days in the North Atlantic trying to protect a fleet of merchant vessels from a pack of preying U-boats. The script, written by Hanks, is a fictional account that draws inspiration from C.S. Forester’s book “The Good Sheperd” and unravels like a game of chess with life and death consequences.

Directed by Aaron Schneider and lensed by cinematographer Shelly Johnson, viewers are placed in the action as if they are members of the crew, waiting for the captain to make his next harrowing decision that will affect the lives of all those they are trying to keep safe. Production designer David Crank (Knives Out, Inherent Vice) focused on authenticity to historically replicate the claustrophobic quarters of the WWII vessel which subliminally added depth to the tension.

“When you start researching these ships, you realize how tiny they are on the inside. It’s rather amazing what they [Navy sailors] did when you go through them. The hallways are so skinny. The staircases are steep. The sets we built were worked on very carefully to figure out how to enlarge the space enough for production without it looking unrealistic,” says Crank.

The film was set on sound stages in Louisiana, apart from a handful of days where production shot on the decommissioned USS Kidd in Baton Rouge. “It’s one of the only destroyers that hasn’t been altered passed 1945,” Crank says. Drawing inspiration from the museum ship, and researching the era, Crank designed the bridge, sonar room, and parts of the deck that would be placed 10 feet in the air on a gimbal.

Since production could shoot different parts of the story on set or on location, both had to match. It became an enormous technical challenge. The art department had to source different items from across the United States, and when that wasn’t possible, they created parts of the vessel themselves.  One of art director Lauren Rosenbloom’s responsibilities was to keep track of all the gauges on both ships to make sure they matched and if they worked. Set decorator Leonard Spears took on the meticulous work of sourcing all the historical parts.

And it wasn’t just what was put inside the ships that had to match. The ship themselves had to as well. “One thing about the bridge on a destroyer is that it’s made from one sheet of metal,” Crank says. “They don’t have any seams. For the design, we had to make sure things could move in and out, which creates seams. We then had to go match those seams on the real ship by making fake welds so the interiors and exteriors would be the same.”

The arc of the story is broken down into 4-hour watches which trigger a crew rotation on the bridge, though Captain Krause (Hanks) doesn’t take a moment to sleep. It’s during the watches where the U-boats try to sink the crew.

In the sonar room, which sits in the deck below the bridge, fast calculations are being made to counterstrike the enemy. The cramped quarters are bustling with sailors. “It’s a very tiny, claustrophobic room. Aaron, Shelly, and I had to work together to figure things out,” notes Crank. “There’s a lot going on inside that room, and if anything got too far apart, it wouldn’t look as small and believable. Everything had to be thought out, and it was a learning process for us.”

The production designer admits the project was a Rubik’s Cube – an enigma balanced between functionally and accuracy that didn’t overlook the smallest of details. Even the color palette echoed the 1940s narrative using little variation in hue. Greys were combined with greens and blues that contrast the lights coming from the instruments on the ship. The sunless sky and murky waters further pushed the ominous visual tone. The light shaped by cinematographer Shelly Johnson mirrored the eeriness with the only hint of warmth coming from flashbacks Krause has of his wife (Elisabeth Shue) which were shot in the lobby of the Louisiana capital building.

“It was one of the few moments we had a chance to come up with colors to play off the ships,” says Crank.  “You don’t see much sun in the movie until the last little bit. We didn’t want to lose the color of the atmosphere, which pushes everything down.”