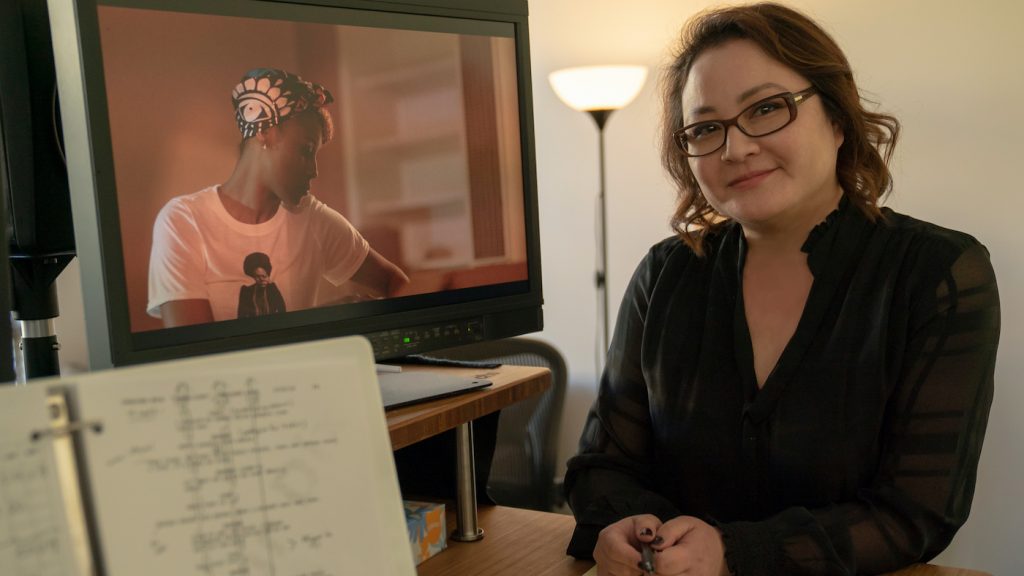 “I’m not ready to go to restaurants,” Insecure editor Nena Erb told me while we were on the phone discussing her career, and, of course, life in the midst of a global pandemic. Yet for Erb, whose career has conditioned her to solitude, she’s making the most of her forced isolation by helping bring up the next generation of young editors. “I was able to work at home for about the first month of the pandemic, and I finished up Insecure, and I’ve been doing a lot more mentoring. I took up baking, but that only takes up a small amount of time.”

While the pandemic has made amateur bakers out of a frankly shocking number of people, Erb’s career has been rising steadily like a well-made sourdough (apologies). She’s worked on the last two seasons of Issa Rae’s fantastic HBO comedy Insecure, she cut for CW’s beloved Crazy Ex-Girlfriend and Apple TV+’s ambitious Little America, and won an Emmy for her work on Project Greenlight in 2016. Once the pandemic hit and her work slowed down, Erb spent more time mentoring young editors.

“I’m currently a mentor in ACE (American Cinema Editors)’s Diversity Mentoring Program. I had been doing it on my own for years prior to joining the organization,” she says. “I mentor production assistants or assistant editors who want to do this full time. For the last three or four years, I’ve been doing it a little more publicly. It’s mostly being available for anyone who has questions, like later today I’ve got a student from New York who wants to discuss Insecure and Crazy Ex-Girlfriend, so I do that a bit every week.”

Her mentoring work began when she started working on Insecure in 2018. HBO profiled her in this video, and once it was posted, the response from would-be editors was great.

“One woman said it was her goal to be an editor, and there are so few women editors in this business, so I told her to hit me up when she was out of college,” Erb said. “It’s really rewarding. I recently got my assistant editor a co-editor credit on Insecure. I pretty much have an open-door policy, so any scenes you want to cut, go for it, and if you feel confident, I’m happy to put it in the show and screen it with the producers. If they love it, I’ll give you the credit, if not, I’ll take the hit. Because I have a relationship with the producers, if they don’t like a scene they won’t jump down my throat. I’m not going to lose my job, at least I don’t think (laughs), but for an assistant, it would be a little tough.”

This help that this kind of support provides to an assistant from someone as successful as Erb is hard to overstate. If she feels like a showrunner is supportive of her mentorship, she’ll have her assistant “jump in the seat and let them roll with it.”

That seat is not an easy place to be; it’s where an editor showcases the work she’s done to the showrunner and various other decision-makers, and where she’ll have to make quick adjustments based on the feedback. “Usually, the showrunners are in there, some producers and directors, and sometimes they like to watch the whole episode, while others will just stop you right then and there and ask you to explain your decision or explain what’s not working for them,” Erb says. “It’s up to you as the editor to very quickly solve the problem on the fly. For me, when I was doing that for the first time, with all those eyes on you, the pressure is intense, and it takes a while to get used to that.”

This is why she’s been helping her assistants, bit by bit, get comfortable with it. “I feel like it’s gone really well,” Erb says. “Once they get a bit more confident, they’re happy to jump in there. That experience is so invaluable, and when you’re in the hot seat, it’s hot. I’d never had a chance to ease into it before I was in the hot seat, and it was really stressful, so if I can help someone else ease into it, I’m happy to do it. The number of women editors, especially women of color, should grow. Hopefully, this will make a little bit of a difference.”

Her work on Insecure has utilized all the skills she’s built up over her career, which includes finding the perfect moment in a scene even if it was never intended to make the cut. “Typically on Insecure, they shoot the scenes out of order, so I’ll read the script for that scene a couple of times to refresh my memory of what it’s about, then the second time to catch the screen directions and what the writer is hoping to convey,” she says. “Then I watch the dailies. I like to watch from the minute the camera rolls to when it shuts down. I don’t stop when they say cut, because sometimes they’ll run the camera a bit after and I’ll watch what’s being said during the re-sets. It helps me understand what the director is going for, and I’ve actually used shots of the actors as they’re listening to the directors. There are moments when a joke has been said or dialogue has been said, and a reaction is missing. So I’ve found a lot of that between takes.”

Point of view is also something Erb has learned to play with. “Sometimes I’ll ask myself what would this scene look like if it started from Issa’s point of view, or Molly’s (Yvonne Orji), and I do that to see what jumps out and pops for me,” she says. “We’ve had entire episodes from a specific point of view, so in that case, I’m coming up with alternate ways of coming in and out of a scene to figure out what’s the most dynamic version. There are times where I’ll start at the end of a scene and work backward. This takes you out of any preconceived notions you may have about the scene, breaks you out of your rules and habits.”

When Erb started on Insecure in season three, she was already a fan of the show and knew the signature style of the series. “What was interesting about season three was I was paired up with young and up-and-coming directors, and people who hadn’t directed Insecure before,” she says. “Issa’s concern for my episodes were that I was new, we had a new cinematographer and a new director. So I’m sure it caused a little bit of anxiety for the executive producers, but I hope it worked out well. I think it did because I stayed on for the rest of the season and was asked back.”

Erb prefers working on a mix of comedy and drama, which she says are more similar than they are dissimilar. “I read somewhere comedy is tragedy plus time. I like shows that are in the middle of drama and comedy, like Insecure or Crazy-Ex Girlfriend, which was a comedy-drama musical. Really, it has to do with the story. If the story is powerful or interesting or engaging, I’m on board.”