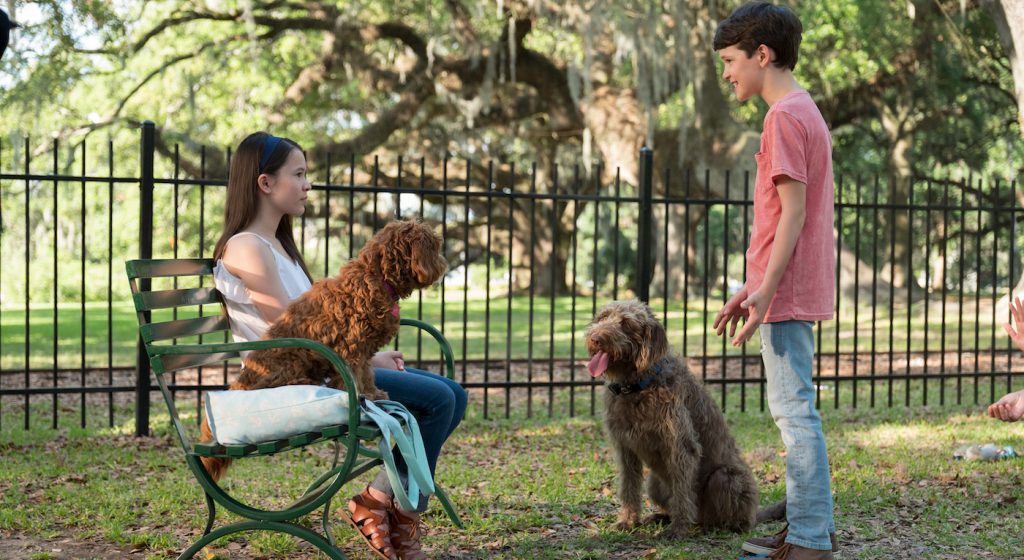 Gil Junger, writer/director of Think Like a Dog, gave animal trainer Sarah Clifford a tough assignment. First, she had to train the title character, a shaggy dog named Henry, to do a variety of stunts that would allow the viewer to suspend disbelief that this dog was communicating telepathically with a kid. Second, find a way to make the dog and said kid, played by Gabriel Bateman, comfortable enough that we would believe they had been together for years. Third, to find a way to make Henry hold his head still and keep his eyes on the camera for extended takes. In an interview with The Credits, Clifford talked about some of the techniques she uses to allow a pup and a boy to appear like they really are mind-melding.

When the dog is in the title of the movie, you know the trainer plays a critical role. What were some of the biggest challenges of this film?

It’s funny, some of the things that look simplest on paper are some of the hardest things to train a dog to do. As the animal coordinator and one of the trainers, and you can’t just read the script and say, ‘Okay, I’m going to train the dog to do this trick and this trick.’ Fortunately, I have experience with talking dogs on movies and TV shows before, so I realized the complexity of it.

Most of the time we just train the dog to respond to cues like ‘look’ and ‘watch’ or ‘watch me.’  That’s the first step. When you train a dog with ‘watch me,’ you start very simply by holding a treat right to your forehead. When they make that eye contact, if you’re a clicker trainer, you can click and pay the dog. It takes time and multiple sessions. When you want to train a dog to look at an actor, you teach him to do the same process, except the dog is listening to you and the reward comes from the actor. You have to have that time to work with the dog and the actor, so the dog learns the behavior of listening to the trainer but focuses on somebody else. One of the most important things I told Gil was that we had to spend time with Gabriel Bateman, who plays Oliver, because the dog and the kid have to have that bond.

So it’s not enough that the dog gets to know and like the actor?

We really had to train Gabriel to learn the cues, too. He has to be willing to reward the dog because that’s really what the animals work for. Praise and love are also rewards, but the dog work for treats. You’re doing it over long hours, over and over again, so that’s what keeps them motivated.

What kind of camera tricks are deployed to help the dog seem like he’s actually communicating with Oliver?

Gil was really good about doing singles on the dogs where we could have just the trainer and the dog and a camera, and that’s hugely important for getting those reactions. Sometimes we used squeaker toys to get the little emotional reaction. We use words or little siren noises. Anything to evoke some kind of performance. In the animal training world, we call them noisemakers, little noises that we use to capture their attention. Sometimes you take a bag of treats and jiggle them over the lens.

What did you say to Gabriel to acclimate him to the dog?

It’s really important to me that the dog isn’t just staring at its’ trainer the whole time. I told Gabriel he would have to learn to become a trainer as well. You have to learn every cue. You have to tell her to sit, you have to tell her to speak, you have to learn our hand cues. You have to be able to give the dog treats. Gabriel’s so intelligent that he just instantly got it. He was great with the dogs, and they had a genuine bond. There was this one scene where they’re in the bedroom together and Henry leans in and just licks his face. You can’t train that! It was perfect timing, and we didn’t cue it. Those are the types of scenes you get when you have the time to let the animals and the actors bond. We like to train the animals and then step away, if we can, as much as possible, and that gets the best performance.

How do you know when you’re looking for a dog that he or she will be amenable to training?

Shelter dogs are always our first go-to. I always try to rescue. The main thing is personality. Having a dog that, of course, is people-friendly. High energy is a great thing for movie dogs. That high energy dog that’s almost too much to be somebody’s pet? Those dogs tend to be better at having a job, better at training. Because you can take that really crazy high energy dog, and you can train them to be calm, but you can’t take a dog who’s fearful and shy and low-energy [and reverse that]. You take all those instincts that a dog has and you use those as tools to train.