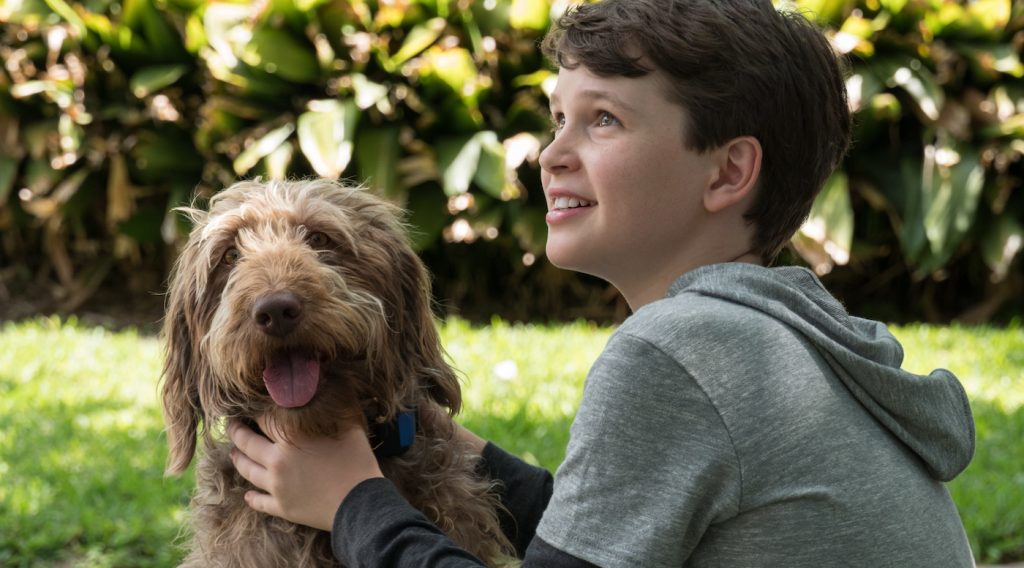 Think Like a Dog is a warm-hearted fantasy adventure about a boy who invents a contraption that enables him to read his dog’s mind. It is reminiscent of Disney live-action classics like The Absent-Minded Professor and The Shaggy Dog. In an interview, writer/director Gil Junger talked about the pleasures of ignoring the show business adage about never working with children or dogs and how the film is a love letter inspired by his own experience of re-connection to his family. Think Like A Dog is available now for digital download, Blu-ray, and DVD.

The traditional show business advice is “no children, no animals.”

I chose to ignore it because I wrote the film for my children. It was a love letter to my children, family, and my dog, believe it or not.

I was glad to see that you used real animals, not CGI.

I wanted the entire film to be authentic, and as believable as a talking dog movie could be. So right off the bat, there was never a consideration that the dog would have a mouth moving. No way. And in fact, the conceit of the film, which is that the boy has the science experiment by which he can end up hearing telepathically his dog’s thoughts — before I wrote the script, again with the aspiration of doing something that can feel believable and feel real, I actually did a bunch of research, including into terminology of what thought transfers could be. Also analog information to digital information, analog energy to digital energy, amplification of minutia, and the electrical currents in the brain.

Where did this research lead you?

I came across this article from a scientist in 1862 who was doing the exact same experiment on humans. He truly believed that thoughts are actually formed by electrical disturbances in the brain, and he truly believed that if he could create a device sensitive enough to measure the change in those little neurons, in theory, we should be able to amplify that and hear, in essence, what the other person is thinking. I think I screamed when I read who the scientist was: some guy named Alexander Graham Bell. It’s the truth.

Ah, he was no slouch in the invention department! And how was it to work with the dogs?

I hired a company that I know is incredibly good at training animals, and I said, “I know it’s an almost impossible ask, but, I really want to do whatever it takes to help the audience believe that this dog is connecting with this boy.” Now, here was what they really did that was amazing.  The instant Gabriel Bateman, the actor, showed up on set for rehearsals, they made sure that every moment when Gabriel was not on set working, he was with that dog, to the point where that dog went home with him to his hotel numerous nights to stay with him, to sleep with him, to hang out with him. It created a comfort level between him and the dog, and the trust level that I think you see in the film. Literally, as soon as I’d say “Cut,” the dog would just run into Gabriel’s lap because they just bonded. And Gabriel is so gifted. It’s bizarre. When he did my movie, he was 13, and just the conversations we’d have about life, and feelings, and emotions, and loss. It was like, whew! He’s incredibly bright. So those were two reasons why working with children and animals in this movie was a joy. Period.

I especially enjoyed seeing Kunal Nayyar as the tech billionaire who wants to steal the invention, a very different role from Raj on The Big Bang Theory.

It was actually the producers’ suggestion, which I thought was a great one. And then to his credit, he picked up the phone and called me, and he said, “Look, I really like this script, but I have a couple of questions for you and I wanted to talk to the director directly to see if we’re on the same page with this character. This guy is a bad guy. Why? What instinctually, emotionally causes him to be this bad, and this mean to kids?’ I thought that was a very insightful, deep question, to really take the character seriously and understand his thirst for hunger, and his quest for knowledge. I said, ‘Because as a businessman, once you have the ability to read someone else’s mind, you could out-negotiate anyone because you know what they’re thinking. What you could end up with is a monopoly on the most important thing there is to sell: knowledge.’ He was like, ‘I love that answer.’

Interestingly, he quoted one exchange in the script that made him want to do this movie. Megan Fox, who plays the mother, [says about her marriage], ‘We’ve kind of grown apart, and it’s like we’re two strangers in the same house.’ And the customer says, ‘What happened?’ And Megan Fox just looks at her and says: ‘Life.’ The reason I wrote that one word was because it’s true. At the time, I was in a marriage that was, I guess you could say falling apart. There wasn’t a huge argument or a big fight, or she cheated, or I cheated or any of that craziness. It was just, we got so distracted by adult human complications, we didn’t prioritize our love for each other, but we weren’t aware of that.

Which brings us back to one of the central themes in your film.

The perspective I was trying to highlight in the movie is: just come back to gratitude and appreciate what’s right in front of you. Not the car, not the house, not the job, not the promotion, none of that matters. It’s all inside. It’s also a lesson that I’ve learned. If you really take a look at who you are, and the gifts you have that you were born with, it is one of the belief structures that has made me, at 65, by far the happiest I’ve ever been. By far. The reason is that I’ve finally learned to love me. Me! And it’s amazing. My preset ideas of insecurities and why I’m not smart enough and why I’m not good looking enough, and why I’m not more successful, and all this crap that I absorbed as a kid, and then ended up believing, it formed a prism through which I’ve viewed life…but then finally, I just got tired of running from me. And what could have been all of those relaxing, peaceful moments of appreciation, filling it with projects, and with things I can achieve, and things I can learn, and things I can do. So it literally has been in the last five years, actually since I started writing this movie when I just went: I don’t need to prove to anyone that I’m a valuable person. I just need to believe it. It’s just the reason that we all deserve to be loved. It’s pretty simple. So, I tried to infuse the movie with that.