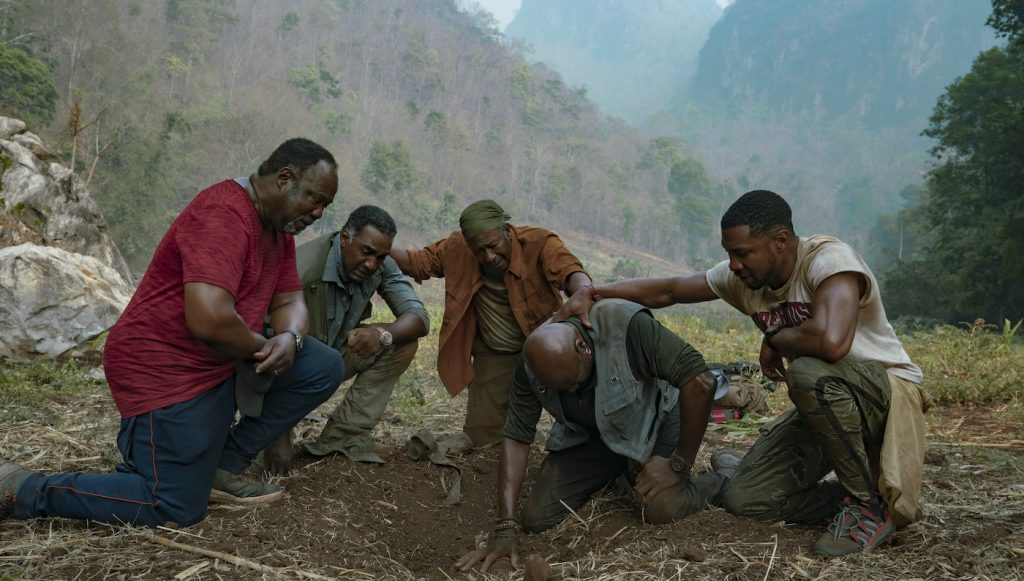 “Da 5 Bloods feels as timely as a minute ago,” writes the San Jose Mercury News‘s Randy Myers in his review. That often seems true of a Spike Lee joint. He has an uncanny ability to capture the moment in films that are often set in the past. He did as much with his stellar, Oscar-winning BlacKkKlansman, and now it appears he’s made another stunningly relevant film in Da 5 Bloods, this one set partially during the Vietnam war.

Perhaps it’s not so uncanny, though. Lee has been making prescient films about the realities of life for Black people in America for decades, from his game-changing Do The Right Thing through documentaries, searing biopics, heist films, romances, an adaptation of an ancient Greek play set in modern Chicago, and more. Spike Lee is an American institution, and there is no filmmaker more attuned to the realities of this country and our current moment than he is. That he made Da 5 Bloods long before our current national reckoning with police brutality against Black Americans and systemic racism yet the film still feels as “timely as a minute ago” should not be surprising. The reviews are in, and there is widespread agreement that Da 5 Bloods is yet another must-see Spike Lee joint.

Da 5 Bloods focuses on four Vietnam war veterans returning to the country to search for the remains of their squad leader (played by Chadwick Boseman), and, while they’re there, to dig up a huge cachet of gold they buried during the war. Lee once again blends archival footage throughout, and stages the scenes of Boseman and the four soldiers during the war in a format that appealingly recalls films from the era, like Francis Ford Coppola’s Apocalypse Now. Joining Boseman are Delroy Lindo, Clarke Peters, Norm Lewis, and Isiah Whitlock, Jr.

Here’s a spoiler-free glimpse at what the critics are saying. Da 5 Bloods will stream on Netflix on June 12:

Ann Hornaday of the Washington Post: “Its moments of stinging insight and soaring cinematic rhetoric once again prove why Spike Lee might be America’s most indispensable filmmaker.”

Peter Travers of Rolling Stone: “Spike Lee’s game-changing Vietnam epic lobs a grenade at systemic racism that speaks to black history from slavery to George Floyd. Lee has made more than a soul-stirring film for our time. He’s made one for the ages.”

Justin Chang of Variety: “Here Lee reminds us – as he did in his recent, galvanizing “BlacKkKlansman” – that his notorious powers of provocation are inextricable from his often under-appreciated skills as a storyteller.”

Bilge Ebiri of New York Magazine: “It is one of the greatest films Spike Lee has ever made.”

Chris Evangelista of Slashfilm: “As he’s done so many times before, with BlacKkKlansman being the most recent example, Lee is able to wrap his messaging up in an entertaining package, crafting what could be considered a war pic and a heist story that has so much more on its mind.”