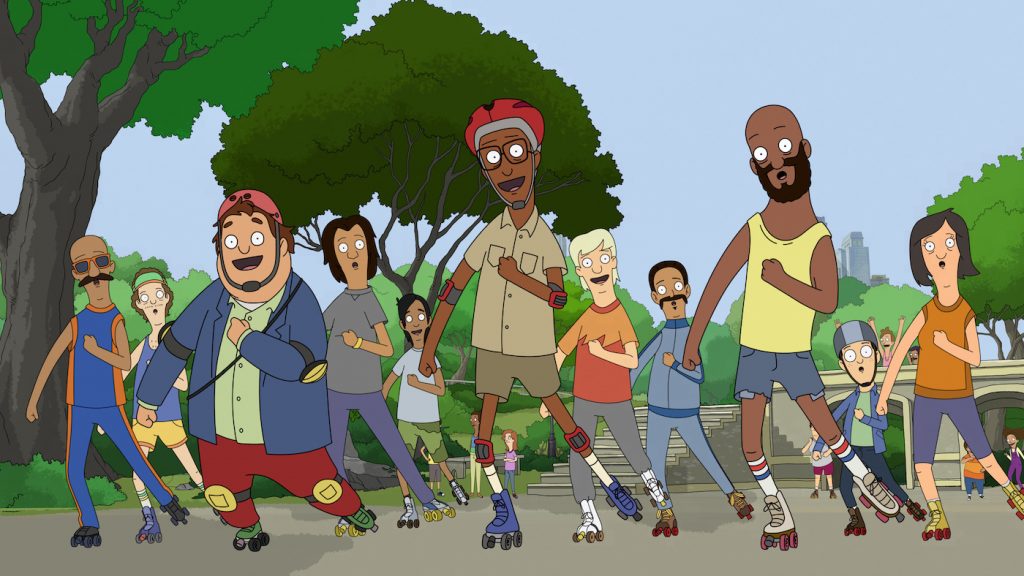 Before he was an adorable singing snowman named Olaf, Josh Gad was a Tony-nominated Broadway star (“The Book of Mormon”) and before that, he was a devoted fan of old-fashioned Broadway musicals, you know, the kind that begin with a big “I wish” song and use the music to reveal character and move the story along. He was also a fan of New York’s Central Park. And the animated TV series Bob’s Burgers. So he sat down with the people behind it and proposed bringing it all together with something that had never been done before: an animated television series set in Central Park with a full Broadway musical-level score in every half-hour episode and top Broadway talent to provide the voices, including his Frozen co-star and fellow musical theater nerd Kristen Bell. Plus, as the voice of the show’s villain, a tiny, vastly wealthy, elderly lady named Bitsy who wants to take over Central Park for real estate development, Stanley Tucci (really).

Gad and Bell met with a small group of journalists to talk about Central Park, now available on Apple TV+.

This really is a show for the whole family. Children will enjoy it and their parents will, too. Even people without children!

Josh Gad: That was the motivation. I wanted a show that I could celebrate with my kids. Something akin to Bob’s Burgers, which my co-creators Loren Bouchard and Nora Smith both also had a hand in crafting. And I wanted it to be a show that celebrated life, that celebrated passion, that celebrated perseverance in the face of adversity. A show that celebrates all those things that make us so human, and we didn’t feel the need to rely on crass humor. There’s the occasional poop joke, I’m not gonna lie, but we felt like we wanted something that really could be the essence of co-viewing. At a time when there are fairly limited options, where you love something but your kids don’t, or your kids love something but maybe you don’t, we wanted something for everyone to love, and I hope we accomplished that. I can tell you in my household, there has definitely been a sense of excitement for the past two years, as my kids have been watching these episodes. Kristen, what about you?

Kristen Bell: Well I wanted to jump in because it’s always more fun when someone else brags about you. I think Josh hit the nail on the head. I signed onto this project knowing nothing about it. I signed on because Josh said, “Hey, do you want to do a cartoon with me?” I said, “Yes.” He said, “OK, bye.” And then a year later, I get told what the plot is, that he hired all our friends. Listen, I have a 5 and a 7-year-old, and we love hanging out, but we are not often agreeing on TV. There are a lot of great shows that they love, but if I watch another PAW Patrol, I will pull my hair out. It’s not because I think it’s a bad show. It’s a wonderful show. I’ve just seen Ryder do it all, right? Chase is on the case, I get it. I need something a little more complicated to keep my interest. It is hard to find things because even going back and watching the ‘80s movies like Back to the Future, things that we think would be super appropriate, even if they’re appropriate there might be something in them that spooks my child. It is harder than you think to create a show that is true co-viewing, and I trust Josh’s comedic and show-running integrity implicitly. I sat down and watched this with my kids, I was incredibly engaged, my kids have been singing the songs, they love it, there’s nothing I’m nervous about. It is the essence of co-viewing, and it makes me so happy that at a time when a lot of us are still at home, we are able to have this joyful snuggle party in the evenings.

The show really celebrates the underdog, like Kirstin’s song, “Weirdos.”

KB: Well I want to start off with one comment about [my character] Molly, and the superhero song. One reason I love playing Molly is that a lot of people who write adolescents on television, in cartoons or live-action, and they can fall into a lot of clichés.  You can fall into a lot of places where they’re just rebellious, or they just hate their parents, all these things that aren’t necessarily realistic. They’re dramatic, but they’re not realistic. Molly is an awkward adolescent, as they all are, but in Central Park, she’s shown with this big beautiful brain that she has, and this lightning world inside her head, that she can only draw about. In that world, she has confidence and power, and I’m very grateful to play her.

JG: I think so many people right now feel like an underdog, and I don’t know that there’s anything that celebrates the underdog as much as we’ve tried to with this show. It’s not just Molly. It’s Owen, it’s Paige, it’s Cole, it’s even Birdie. It’s everybody except for Bitsy who literally and metaphorically looks down on the world. And we loved leaning into that because, again, I think this family shows you how important the power of perseverance is, and also being a family unit.

It is remarkable that you found different composers for each episode. How do you find them and how do you keep it consistent?

JG: I’m what some might call an unhealthy devotee of the musical form. I got my start on Broadway and then went on to do a lot of musical films including Beauty and the Beast, and of course the Frozen films with the brilliant Kristen Bell. But I wanted to bring that love of the musical form to television in a way that I hadn’t necessarily seen it done before. I didn’t want it to be pastiche, I didn’t want it to send up musicals, I didn’t want it to be a show with music. I wanted it to be a show where the characters had no choice but to break out into song, to express themselves emotionally, to create a tapestry of songs that would interconnect thematically from episode to episode, and seasonally as well, maybe even series-wide. That was a very ambitious task, and when I first pitched Loren the idea of doing four songs a show, I thought he was gonna kill me. I knew that that responsibility could not fall on the shoulders of one or even two composers. We started off with the most incredibly gifted composers that I knew, and Kristen knew of, but not many people did, Kate Anderson and her partner Elyssa Samsel, who wrote the songs for Olaf’s Frozen Adventure that Kristen and I did a few years back. Their music was extraordinary. We started with them and then brought in this incredible composer that Loren knew named Brent Knopf. And Sara Bareilles. Then from there, we built out this amazing list of guest composers who were willing to come in and write for people like Kristen and Titus Burgess and Leslie Odom Jr. and Daveed Diggs and Stanley Tucci and Kathryn Hahn. And we’ve been really blessed, it’s been an extraordinary collaboration.

What relationship do you have with Central Park?

JG: I can recall a very vivid memory of being in the spring of ‘99. I was going into my final semester in high school, and I had applied to Carnegie Mellon drama, where I would actually meet my co-star Leslie Odom Jr. who was my classmate. I left my audition in New York City, and I put everything on that audition. That was going to be my lifeline, and if I got into the school I was set, and if I didn’t, I was ruined, in my mind. I left the audition and my mom said, “What do you want to do?” And I said to her, “I’d love to take a stroll through Central Park.” We walked into the park, and I kid you not, it started sprinkling snow as I took a step, left the border of this concrete jungle and entered the border of this magical natural wonderland. It really made me feel like everything was going to be OK. And the thing that I’m obsessed with about Central Park is it’s the great equalizer. You can be the richest person in the world or the poorest person in the world, but when you’re in that park, you’re on an equal playing field. The park shouldn’t exist. And yet here it is, in the midst of steel. You’re taken to this place where anything is possible. That, to me, felt like the magic that we wanted to bring to this series.

KB: That’s such a beautiful way to say it, Josh. I went to NYU, so I went to school in the city. There’s something very special about this paradox that is Central Park, in that it shouldn’t exist there, and it is an equalizer, but you’re able to fulfill both parts of your personality, or at least I was. I was ready to be a working woman and live in a walk-up on the fourth floor, and yet I sort of yearned for a little bit more Michigan’s green spaces, and then I could go to the park and that could happen. To me, it’s a celebration, which our show is as well, a celebration of diversity because there are two different lands right next to each other, coexisting, and I dare you to find a person in New York City who can’t make an argument that you need them both.