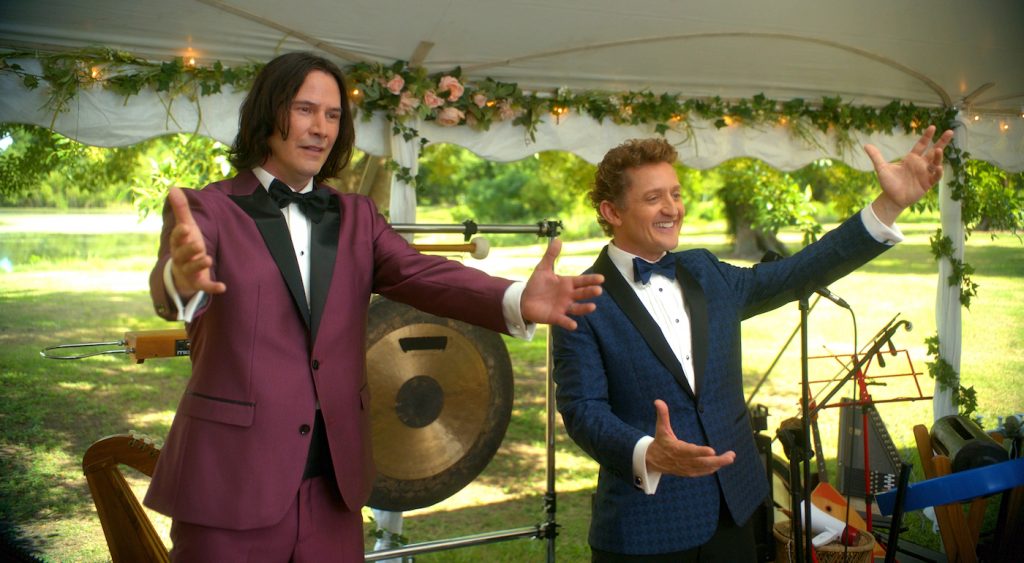 Keanu Reeves and Alex Winter are finally back together again in the first trailer for Bill & Ted Face the Music. The third film in the excellent trilogy, Bill & Ted Face the Music comes from a script from original screenwriters Ed Solomon and Chris Matheson, which sees our dynamic duo learning that only one of their songs holds the key to saving all life as we know it. Gnarly.

The first time we met Bill and Ted was in 1989’s Bill & Ted’s Excellent Adventure. The last time we saw these two knuckleheads grinding it out on a fresh quest was the 1991 sequel, Bill & Ted’s Bogus Journey. Yes, technically, Winter and Reeves were together for Bill & Ted Go to Hell, a 2016 documentary, but fans have been itching to see them take on one last adventure together, so today’s trailer is manna from a guitar god’s heaven.

Here, we find William “Bill” S. Preston Esq. (Winter) and Theodore “Ted’ Logan (Reeves) as middle-aged rockers who have yet to craft the tune that’ll save the world. Once the action kicks in, Bill and Ted need to embark on a new, epic adventure to find the one and only song that’ll save humanity. Only they’re no longer alone; they’ve got daughters. Bill’s got Thea (Samara Weaving ) and Ted’s got Billie (Brigette Lundy-Paine). The foursome will also find some help with a few familiar faces, some historical figures, and some musical legends, too.

So how are Bill and Ted going to write the tune to save the world? In pure slacker fashion, they’re not. Instead, they’ll simply travel to the future to a time when they’ve already written the song, and steal the tune from themselves. Beautiful. We’ll leave the shock of their future selves to your viewing pleasure. It’s absurd.

Here’s the official synopsis for Bill & Ted Face the Music:

The stakes are higher than ever for the time-traveling exploits of William “Bill” S. Preston Esq. and Theodore “Ted” Logan. Yet to fulfill their rock and roll destiny, the now middle-aged best friends set out on a new adventure when a visitor from the future warns them that only their song can save life as we know it. Along the way, they will be helped by their daughters, a new batch of historical figures, and a few music legends – to seek the song that will set their world right and bring harmony in the universe.