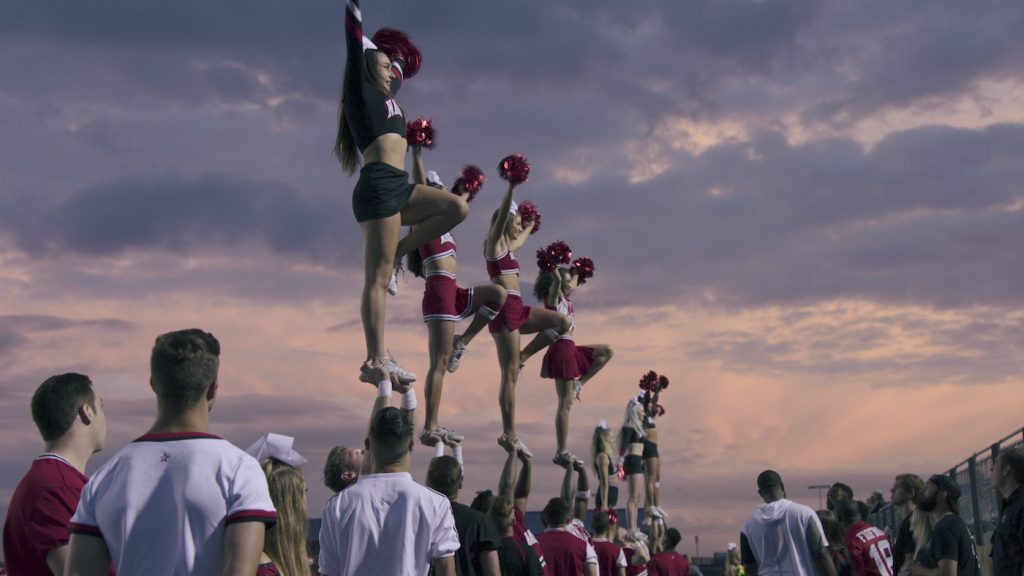 Arielle Kilker brings pretty much everything she’s learned in her career to bear in her Netflix‘s Cheer, the series she co-created, co-directed, edited, and produced. That includes the Emmy-nominated work she put in as editor on Chef’s Table and a supervising editor on the Peabody nominated Last Chance U. She’s also edited and written crime docuseries on projects for MSNBC, A&E, and PBS. For Cheer, Kilker decided to move away from stories about women who had been victims of crimes—with the focus often on the men who’d harmed them—to focus on a series that put women front and center. In the case of Cheer, which is now streaming on Netflix, those women are often airborne, too.

Cheer follows the competitive cheerleaders of Navarro College in Corsicana, TX. This small junior college has won an astonishing 14 National Championships since 2000, led by irrepressible coach Monica Aldama. We talked to Kilker about how she crafted the six-episode docuseries, forming deep relationships with the Navarro College cheerleaders as endure personal setbacks, injuries, and more in their run-up to National Championship.

You are really all over this production, producing, directing, and editing. Tell me about taking on that many roles for Cheer.

It was a lot of work! I always put all of myself into any project that I work on, but this was a whole different level. Being a part of this project from inception through delivery was incredibly satisfying. Having a background in editing gave me a lot of confidence in the field. I knew how we would need to cover a moment and what material we should pursue to make sure that we could tell a complete story in the edit. You can learn a lot about filmmaking while working as an editor and I took everything I had absorbed over the years and applied it to my work directing a camera unit.

You’ve got a background of editing crime docuseries, why was taking on Cheer important to you.

Getting my start as an editor in the crime genre was great because it was like boot camp for writing in the docuseries format. It’s all about controlling how and when information is revealed to an audience so that it’s engaging and surprising while being truthful and enlightening. Something that bothered me when I was an editor for crime docuseries though, was that the only time that I got to tell the story about a woman was if she was dead. And then the story became about the man who killed her. So to be able to create a show like Cheer where the audience experiences the female perspective has fulfilled a career dream of mine. On top of that, we met some incredible male athletes at Navarro, and the stories of young gay black men are even less represented in the media. All in all, this project met a lot of the standards for the kind of work I want to put my energy into.

I’m curious what it was like to get to know your subjects at Navarro College, about getting to know their personal stories. What was it like behind-the-scenes as you were crafting this series?

As intense as the practices and injuries were to watch from your sofa, I can tell you my heart stopped daily while we were filming with them. With all the risk and commitment involved, a big question we were constantly trying to answer was: why on earth would anyone do this? We knew it would take a lot of time and the right people on the crew to be able to build relationships and achieve a level of trust with the team in order to properly tell their stories. Thankfully, Netflix and Boardwalk Pictures helped us get what we needed to make this happen. We knew this series would be about more than just the sport of cheerleading. Although each athlete’s story was unique, they shared both a common pain and healing process. What Cheer is really about, is overcoming past trauma. A lot of the issues these athletes faced are universal issues that are incredibly important to talk about as a society. I’m forever grateful to the team for trusting us with their stories and giving a voice to others who have had similar traumas.

Cheerleading is a pretty film-friendly sport and has been captured in series and films before. Did you and your team have a sense going in on a specific way you wanted to capture the performances?

Definitely. We spent a lot of time developing a style and tone to make sure that we would illustrate the true grit behind all the rhinestones and makeup. And just as important as the visuals was making sure that we captured the raw audio of bodies clashing together and the exhausted grunts of landing a tumbling pass. Our sound mixers, Kerri Kuebler and Nick Kelly were total champs when it came to figuring out how to mic the team and make the audience feel every piece of those practices.

You hired two great female DPs—how do you think this affects the production and the way your crew interacts with your subjects?

Yes, our core crew was almost entirely women. It was really important to me and the rest of the producing team that we hire this way. We knew we wanted to take a fly-on-the-wall approach, having as little influence on the Navarro team as possible, to achieve a high level of intimacy. So really, we just became friends with the team. As they practiced, or did their homework, or hung out in the dorm, we weren’t a film crew, we were a bunch of girls (and a few guys) just hanging out. Our DPs, Melissa Langer and Erynn Patrick, were incredible at creating a space where the team felt comfortable both emotionally and physically.

Why was having a predominately female crew important to you? Can you share any specifics from filmmaking that highlighted why this is so crucial?

Why not hire a bunch of women? People hire a bunch of men all the time. Early on we realized we had something really special, and we knew we had to knock it out of the park. We recognized how rare this situation was with all these women on the crew, and we felt like we had something to prove. So we constantly pushed one another to do better. My producing partner Chelsea Yarnell and I had some sleepless nights because we were obsessive about making sure we were prepared for the next day and would be able to make good snap decisions. I’m a bit of a perfectionist and there was no way I was going to let this project be anything but the best work I could do. Because of that, post-production almost killed me. Like the cheerleaders, we all really bled for this one.

What moments from production, or during your edit, stand out for you? Where there times when you thought, yes, this is precisely why I wanted to make this series?

When a cut is working really well it feels so right that it seems like there was no other way it could have been put together. All the decisions seem to have been simple and obvious, but that couldn’t be further from the truth. Of all the roles that I had on Cheer, the editing was by far the most challenging and demanding. There’s a sequence in the middle of episode 4 that, to me, is one of the most crucial in the series, and it was also one of the most difficult to get right.

We knew we wanted to address how cheer culture has changed over time and we wanted to frame it with Monica’s views on LGBTQ+ issues. We were fascinated by the way Monica fuses the sport’s past with its present, channeling traditional American values to empower non-traditional cheerleaders to self-actualize. At times this seems to be at odds with her conservative, small-town Texas lifestyle, but the reality is far more nuanced. We wanted to capture that dynamic as faithfully as possible, painting a multi-layered portrait for the viewer, so the sequence we put together is comprised of 7 or 8 different parts and is kind of sprawling. The boys watch Bad Girls Club in their dorm, we meet Monica’s father, and there’s even an archival section. We trashed many failed attempts and the final version is the product of a group effort. The story team, and particularly Claire Onderdonk spent a lot of time on this section, and the sequence was passed between me and the other supervising editor, David Nordstrom, who also happens to be my spouse. This idea was definitely worth fighting for and it’s one of the sections I’m most proud of. I think Cheer is actually a really challenging series to watch and may make people uncomfortable at times, but the fact that it did so well is proof that audiences are hungry for material that allows them to think for themselves and broaden their perspectives.