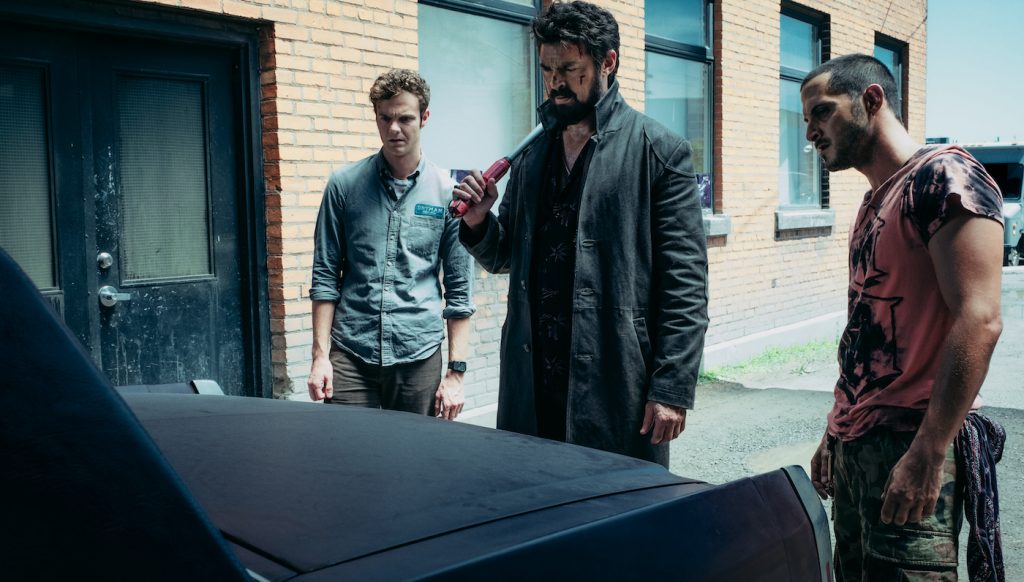 In part 2 of our interview with the costume designers for Amazon Prime’s anti-hero superhero series The Boys, Laura Jean Shannon and Carrie Grace talked about the mechanics as well as the artistry involved in creating the superhero costumes—and the titular Boys’ more regular-guy clothes—for the hit series. Each super-suit requires a ton of work and enough duplicates that the actors and stunt performers can keep looking good. Season 2 of The Boys will be available later this year.

The Boys has a lot of action. What does that mean in terms of the number of doubles of each suit that you have to have, and how do you design the suits to make sure that the actors and stunt people can move the way they need to in the action scenes?

Laura Jean Shannon: I always say: They play superhero suits on TV. But in real life, they’re actually unconventional materials and custom fabrics fused together in interesting ways, in innovative ways. We start by creating a design that not only takes into account making it look like a badass superhero suit but knowing that this is not a massive film where we have a giant CGI budget, where you can basically paint everything in we need to. This is a TV project that has a limited amount of time and money and resources to get each episode, and each episode is chock full of fighting and violence. So, we really need to make these suits wearable, and the actors and the stunt people really need to be able to wear these suits comfortably enough that they can facilitate all of this action.

And how do you do that?

Laura Jean Shannon: Each suit has a very different technological approach, and we make multiples of each one of them. We have several suits for each actor and stunt person so that while we’re shooting our fight sequences, we can swap suits out while one is being repaired. Each suit has very different needs, in terms of keeping it looking spiffy and ready to roll. And then, of course, there’s also crazy things that the writer’s room dreams up, that the directors are all excited to shoot the hell out of, that require even more work on our part to create different molds and sculpt things that we can add to the suit, panels that we can take out and replace for various needs, depending on the script and the scene.

Laura Jean Shannon: Homelander’s suit was created in this very classic superhero way. Antony Starr wears a suit that is foam latex, like a rubber that the fabric is fused onto, so his musculature is actually part of the suit, and he slips right into the whole thing.

Queen Maeve has her armor corset that looks metallic, but we actually created out of a semi-flexible lightweight resin. Pretty much every single one of the characters has at least a handful of sculpted elements on their suit, be it their belts or their inlaid stars, or their eagle epaulets. The way that we create those pieces is different per piece. For instance, all of Queen Maeve’s pieces were actually created by conventional sculpting techniques. I had this amazing sculptor working at Creative Character Engineering using her artistry to create each one of those pieces by hand. But a lot of other pieces, like the eagle epaulets for instance on Homelander, are done in a 3D model, and I’ve gotten really good at letting go of having everything done conventionally and classically, and learning how to read those 3D models. Part of what makes that really helps is that we scan each of our actors. So, the 3D models that we make are all created literally right on the body of the actors themselves. Oftentimes we’ll rescan them with their muscle suits on, if necessary, as well. So basically, the same approach is taken when we do our model in the 3D digital platform.

How do you approach the challenge of making what the messy, un-heroic-looking guys wear communicate to the audience that we’re supposed to root for them?

Carrie Grace: Butcher (Karl Urban) is a total scoundrel, and I love the irony of him being the one who’s almost all in black because he looks like the bad guy, but he’s actually complicated. Since I was the designer for the first two episodes, I had the honor to design the costumes for Butcher, for Hughie (Jack Quaid), and Frenchie (Tomer Capon). They were the real people. They were supposed to look like real people. Butcher was certainly the underbelly; he looks like he’s a sleazy guy. The intention was to give him the look of a sleazy guy who can’t be trusted. But in a world where the heroes that are there to protect us really aren’t, it’s almost like he becomes the person to look to. He steps out of the system. He’s rejected the system of normalcy that everyone’s trying to promote.

And then Hughie with his normalcy, he’s the underdog, the everyman. He is almost like a lost soul who doesn’t know what his purpose is, and then Butcher gives him this purpose. Then there’s Frenchie—a rogue, psychotic, drug-addled weapons expert, and is, I think, one of the most interesting characters in the comic book. And to have this ragtag crew, who are saying, “There’s something wrong here,” and owning it in their own way. They become the superheroes in some ways, to me.

Each one has a signature jacket. Butcher’s got his long coat and Hughie’s got his 60’s-style racing jacket, and Frenchie’s got his military jacket. Those jackets, to me, become their capes. They turn them into archetypes, and it becomes their uniform. Each of them has a signature look under that cape of sorts. Butcher wears these Hawaiian shirts, which are off-putting and confusing with the rest of this look that he’s got going on. He looks like a total tough badass but he’s wearing this Hawaiian shirt. Is he laughing at us? Is he messing with us? I love that confusing detail about him.

Then with Hughie, he’s always wearing his classic rock or band t-shirts underneath his grunge-style, or his chambray shirt from work with a hoodie and corduroys, just that kind of slacker look. His jacket probably came from a Salvation Army or Goodwill. He grew up without money. It was next door to the record store. I always try to come up with a backstory about where they got their pieces of clothing. With Butcher, one of the backstories was that when this is all over, he wanted to retire on the beach. That’s not one that I came up with, that was Dan Trachtenberg, who directed the first episode. He’s the one who suggested the Hawaiian shirt and I was not on board with it at first. Then I was like, “Oh, wait a minute. His idea was that when this was all over, he wanted to retire on a beach,” which is something that the audience may never know.

Carrie Grace: With Butcher’s jacket, it looks like a leather trench, but it was actually an oilskin jacket. All the jackets were constructed so that we could control how many multiples we had. With these guys, we were definitely going to need multiples, but we wanted to make these iconic jackets last. For Butcher, we constructed this oilskin, badass looking jacket, and then we distressed it down. At one point, I said, “Can we put a piece of duct tape on the back shoulder? Like he slid on the ground, and it opened up a hole, and he just patched it with a piece of duct tape.” And so that’s what we did, just to give it some idea of history and past battles.