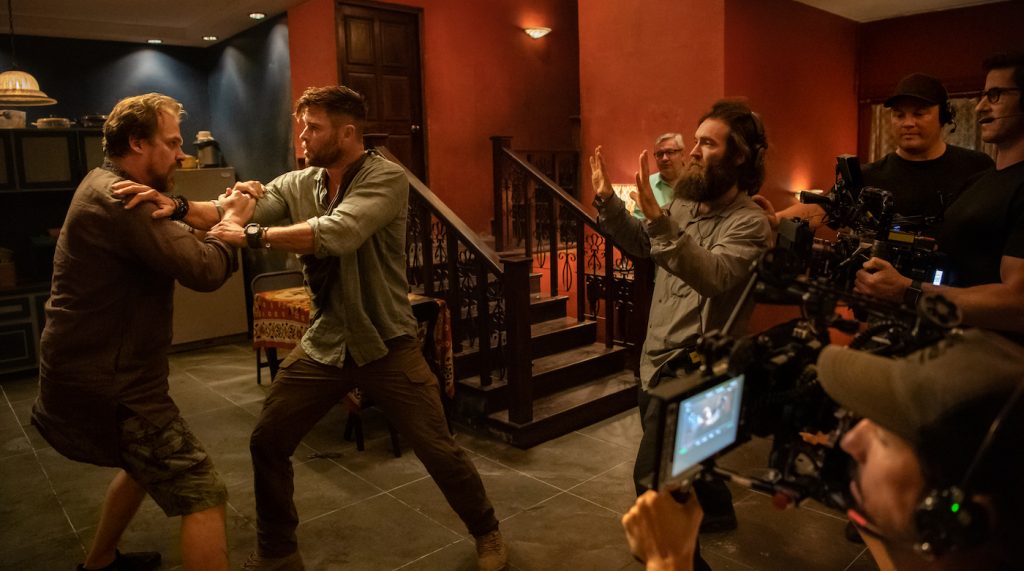 See How Netflix’s Epic Action Film Extraction Was Made

Netflix’s upcoming high-octane action flick Extraction feels like the kind of relentless shot of cinematic adrenalin we could use right now. Directed by Sam Hargrave, longtime stunt coordinator on many of Marvel’s biggest films (he was both stunt coordinator and second unit director on Infinity War and Endgame), Extraction stars Chris Hemsworth as Tyler Rake, a black market mercenary going on a suicidal mission to rescue the kidnapped son of a big-time crime boss. A new behind-the-scenes video released by Netflix reveals how Hargrave, Hemsworth and the cast and crew pulled off their upcoming pulse-pounder.

“This is the location where we start the oner,” says Hargrave. A oner is “a series of long shots that we join together seamlessly to form a single continuous shot.” In recent years, this kind of brilliantly blended cut has become a staple in action films, as stunt coordinators, directors (and stunt coordinators who have become directors, like Hargrave and Deadpool 2 and Atomic Blonde‘s David Leitch) have upped the action ante, again and again, to create sequences of brutal beauty.

Hemsworth’s pal and Avengers: Infinity War and Endgame co-director Joe Russo wrote the script for Extraction, and in the video, he singles out a particularly epic car chase in the middle of the film.

“The chase sequence that comes in the middle of the film is very intense. Sam committed an incredible amount of time and thought to pull that stunt off,” Russo says. “He was strapping himself to the front of chase vehicles…it’s as risky as it gets.”

Check out the video below. Extraction will stream on Netflix on April 24.

Tyler Rake (Chris Hemsworth) is a fearless black market mercenary with nothing left to lose when his skills are solicited to rescue the kidnapped son of an imprisoned international crime lord. But in the murky underworld of weapons dealers and drug traffickers, an already deadly mission approaches the impossible, forever altering the lives of Rake and the boy. An action-packed, edge-of-your-seat thriller directed by Sam Hargrave, EXTRACTION is an AGBO Films and TGIM Films, Inc. production, produced by Joe Russo, Anthony Russo, Mike Larocca, Chris Hemsworth, Eric Gitter, and Peter Schwerin.