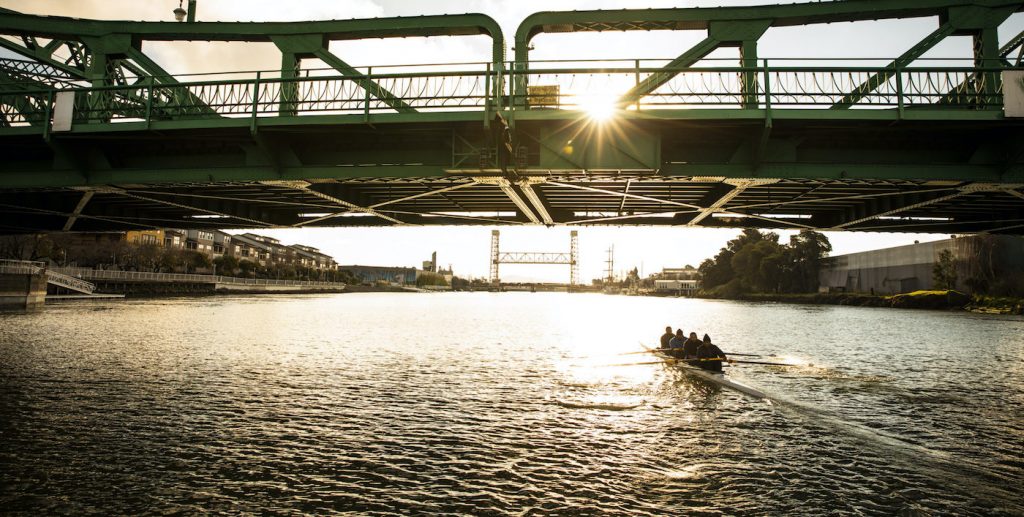 Director Mary Mazzio was set to take her documentary A Most Beautiful Thing to SXSW this year. Then the spread of COVID-19 became such an undeniable reality in the United States that SXSW was canceled. The news of that cancellation came along with the shuttering of film and TV productions all across the globe. Once theaters started closing, world premieres were pushed back months, too.

“It’s a bummer, but we’ve now pivoted, says” Mazzio says, whose doc is now slated to be released on June 12. Yet as we’ve all come to learn, there are few hard dates in the era of the novel coronavirus, but one thing is certain; Mazzio’s film will be a must-see whenever it premieres.

A Most Beautiful Thing is centered on the first African American public high school rowing team in the United States. The team from Manley High School was made up of young men from the West Side of Chicago, many of whom were in rival gangs, yet they poured into the same boat to compete. Narrated by Common and executive produced by NBA legends Dwyane Wade and Grant Hill, Mazzio’s film not only explores the story of the rowing team, but the trauma, violence, and grinding poverty that each endured on their way to the water. A full 50% of the film’s screening profits will be donated to support inclusion efforts within the sport of rowing as well as trauma research.

Mazzio knows a thing or two about the sport—she rowed for the United States in the 1992 Summer Olympics in Barcelona. Her path towards directing a documentary about an inner-city rowing team didn’t begin with a hot tip from a former Olympian, but instead a tweet by Arshay Cooper, the author of the memoir “Suga Water.”

“We’re quirky, unique people,” Mazzio says of rowers. “So I ordered the book off Amazon, read it, and then I tweeted at Arshay, About a nanosecond later, a tweet comes rocketing back at me. Fifteen minutes later, the phone rings. “Thank you for reading my book, would you ever make a film about it?”

The path to turning Cooper’s book into a documentary wasn’t as smooth as a perfect day on the water, but Mazzio had found a subject near and dear to her heart. She also had years of experience getting well-received, difficult-to-make documentaries produced through her production company 50 Eggs. For ample evidence of her chops, you can’t do better than her 2017 documentary I Am Jane Doe, a searing, critically acclaimed look at a group of American mothers waging a legal battle on behalf of their middle-school daughters, who were trafficked for commercial sex.

Finding funding wasn’t initially easy, but Mazzio was committed. Coming off the success of I Am Jane Doe, which was not only critically acclaimed but had a material impact in battling child sex trafficking, Mazzio had momentum. “When a story comes in like this, it doesn’t walk in with a budget,” she says. “But what an exceptional opportunity it was! Here’s a sport I love, and here’s this story about an exceptional team and how this sport dramatically changed the lives of these young people. I knew instinctively the timing was right for a film like this and all that it stood for, but it was challenging at the beginning,” she says.

“Then I was having a conversation with Bill Hudson, a philanthropist on the west coast, and he was saying, ‘We have this lily-white sport, and there’s a pathway to college here for so many people who don’t have this opportunity.’ So he fell in love with my project, and once you get the first money in, you catch some wind. I’ve got this incredible story that speaks to trauma in low-income communities, and then all of a sudden Bill makes a few calls and my existing network of support gets excited.”

Mazzio says that production began on the film with an informal but crucial tour of Chicago with Arshay Cooper.

“The first thing Arshay does is have me come to Chicago to a ride around,” she says. “We headed to the west side. It blew me away, the topography, every other corner is a different gang’s territory. ‘How do you get to school in this environment,’ I asked him. Therein lies the problem. I thought we were going to have a retrospective of their lives 20 years ago and bring it up to date, and then maybe, if I got lucky, I’d get them all on the water.”

One of Mazzio’s initial ideas was to interview Michael O’Gorman, a former world champion coxswain and a coach of the Vesper Boat Club, Stetson University, and the Chicago Rowing Center. Mazzio had found out that O’Gorman had also coached the team in Chicago.

“Then, three weeks later, Mike dies,” Mazzio says. “So there was a memorial for him at an Irish bar outside of Philly, and it was really exceptional, all these guys telling these stories. So Arshay beckons me over and tells me that he’s thinking of getting the team back together and going out to race. The hair on the back of my neck goes up. ‘We’re going to race at the Chicago Sprints,’ he tells me. And I said, ‘Are you ready? Do you really want to do the training?'”

Mazzio realizes the documentary she’d envisioned is changing before her eyes. Arshay calls up the U.S. Olympic coach, Mike Teti, to see if he’d help train them. “That’s like calling Warren Buffet after starting a lemonade stand,” she says. “Mike loves it. He’s all in. We go out into the Olympic training center and he loves the guys. He becomes their unofficial coach.”

A Most Beautiful Thing dives deep, going beyond the inspiring story of these guys getting back out on the water and explores their backstories, interviewing their families, finding out about what it was like growing up in these neighborhoods in Chicago.

“We exposed a vein that was so extraordinary. Their mothers were talking about intergenerational violence, going back to sharecropping, even working on a plantation,” Mazzio says. “We’re having these very deep conversations about impediments in these neighborhoods, and law enforcement, and the toxicity of those relationships. Arshay was arrested at 16 for nothing, and he was working part-time at a Starbucks and sees the cop who arrested him. He gave the cop a latte, on him. Twenty years later, that cop was at his wedding. They stayed in touch. He’s just a natural connector. So Arshay calls me up and he says he wants to invite the Chicago Police Department to see the rowing team.”

Mazzio films the moment the Chicago PD shows up. “They invite the cops into the tank. These tall, gangly, white Chicago cops who don’t know how to row, and here are these young men, three of whom were in gangs, one of whom is under house arrest, and they’re teaching the cops how to row. Behind the camera, I almost cried three times. We were on this bizarre planet far away. Arshay rolls around at the end of the session and asks the cops if they want to race at the end of the summer. That began a series of training sessions, where the guys and the cops were going out on the water. As Arshay said, ‘I never thought I’d have the opportunity to yell at a cop!’ What an amazing gesture by Arshay and the guys to extend the opportunity for a dialogue with these cops. That was exceptional, and completely and wholly unexpected.”

Exceptional and wholly unexpected is a great way to describe A Most Beautiful Thing. See it, when you can.