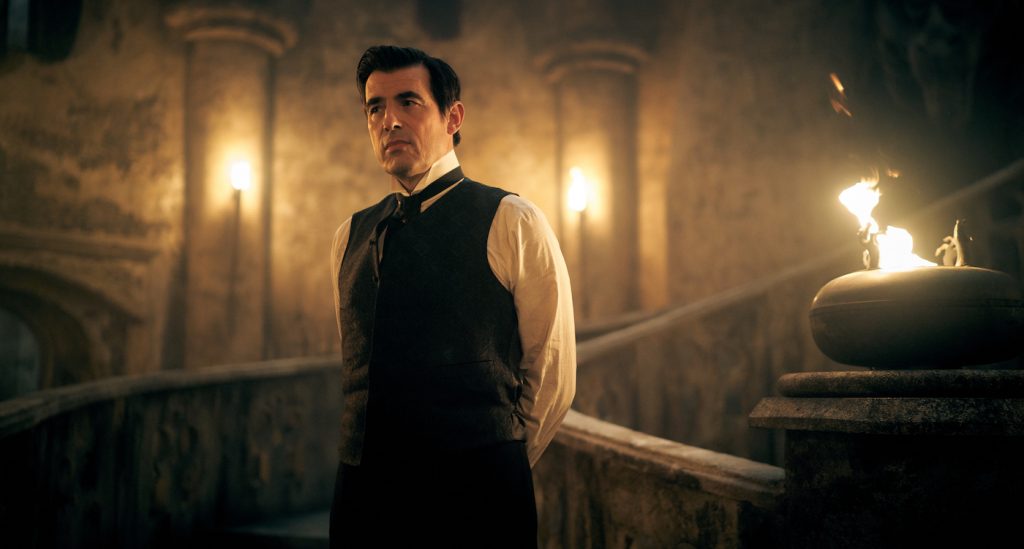 Consistent with Bram Stoker’s 1897 novel, Netflix’s new three-episode Dracula series begins with a hapless English solicitor, Jonathan Harker (John Heffernan), ignoring the Transylvanian locals’ misgivings to make his way on a snowy evening to Count Dracula’s forbidding castle. In the original novel, Harker is initially impressed with his host’s social graces before realizing he’s a prisoner, but 2020’s Dracula (Claes Bang) is ratty haired and grim, intent on getting the social skills he’ll need for England from his guest. More efficient than daily language lessons, he orders Harker to stay for a month, nightly draining his captive’s English ways directly through his blood. As the demon grows young and posh, Jonathan rapidly wastes away. Despite his failing strength, he spends his days roaming the decaying, labyrinthine castle, discovering a storage room of desperate undead and a bride of Dracula, some kind of perverse project hellbent on killing him.

Thanks to his own slide into the world of the undead, Harker is able to escape the vampire’s decaying palace. He lands at a convent, where the frankest of nuns, Agatha Van Helsing (Dolly Wells, playing a fresh spin on the original novel’s expert professor Abraham Van Helsing), absorbs Harker’s story with relish and greets the arrival of his vampire pursuer with almost eager anticipation. Despite the disaster at the nunnery, in the second episode, Agatha’s research continues, with the show toggling back and forth between a curious chess game played by nun and vampire, and Dracula’s quest to reach the shores of England. During the third feature-length installment, Dracula has managed to settle in in London, following a short stint in captivity in a purpose-built vampire jail cell.

Each of the three episodes are marked by a limited but distinct set of locations. To begin, the show’s creators, Mark Gatiss and Steven Moffat, and their cast and crew headed to Eastern Europe to film aspects of the count’s castle and Sister Agatha’s nunnery on location, bypassing Romanian Transylvania for a particular set of castle walls in Slovakia. “It was actually the exterior of the castle they used in Nosferatu, the first-ever vampire on film,” said Arwel Jones, the show’s production designer. “Mark Gatiss is a very massive horror fan and had been to Orava Castle to do a documentary years ago, so he knew it was from Nosferatu. As soon as he mentioned that, we all kind of went, well, it has to be that one.”

The stars of vampire lore further aligned in time for building the series’ sets. “Studio space in the UK is at a bit of a premium at the moment, because there’s a boom of both film and TV making, and the timing just happened to work,” said Jones of a chance opening at Windsor’s Bray Studios, coincidentally the original home of Hammer Horror (which produced the 1958 version of Dracula). Here, Jones and his team built the second episode’s vintage sailing ship and the glass, triangular holding pen where Dracula is briefly waylaid after washing ashore in the present day.

Jones and the series’ creators originally looked at real historic ships on which to film the count’s journey to England, but “this is where I often describe my job as being a cheat and a liar,” the production designer joked. “It quickly showed that there wasn’t enough space, even on a large, three-masted boat, to really convey the whole idea of the demon hiding on board, without turning around and going ‘there he is.’” The vessel’s three decks were built from scratch. For the below-deck area containing the ill-fated passengers’ many cabins, Jones designed something of an optical illusion, a single set on wheels that could be moved from door to door, rearranging the cabin’s rear wall to give the appearance of different rooms.

Just as nifty is the present-day triangle jail cell at the Harker Institute, even if Dracula doesn’t remain there long, thanks to a legal loophole and his quick proficiency with the internet. “We wanted to give the idea that this technology was Victorian and they built it as soon as Mina had got back,” Jones explained of the institute’s combined vintage and modern aesthetic. “This was their way of trying to control Dracula if they caught him back in the Victorian era.” Building the vampire’s cell as a triangle allowed the production to play with refractions of light (to which this Dracula is still inimical), making the whole thing move as if it was placed upon a sundial.

With the help of a slavish lawyer, Dracula makes his way from the mysteriously-funded Harker Institute to a high-ceilinged, art-filled bachelor pad. For acolytes of Stoker’s original epistolary work, this modern-day scene is all new, but Jones drew parallels to Dracula’s Transylvanian abode through decor like a coat of arms, armor, and a massive dining table, the final site of the series’s most significant moment. In particular, super-fans will want to look out for a Talitha Wells sculpture by the door, depicting an impaled figure—Jones rented the work for the show in an intentional reference to Vlad the Impaler. The notoriously cruel 15th-century Romanian nobleman goes unmentioned in this iteration of Dracula’s store, but without this historical figure, many believe the idea of Dracula might never have existed.

Dracula is streaming now on Netflix.