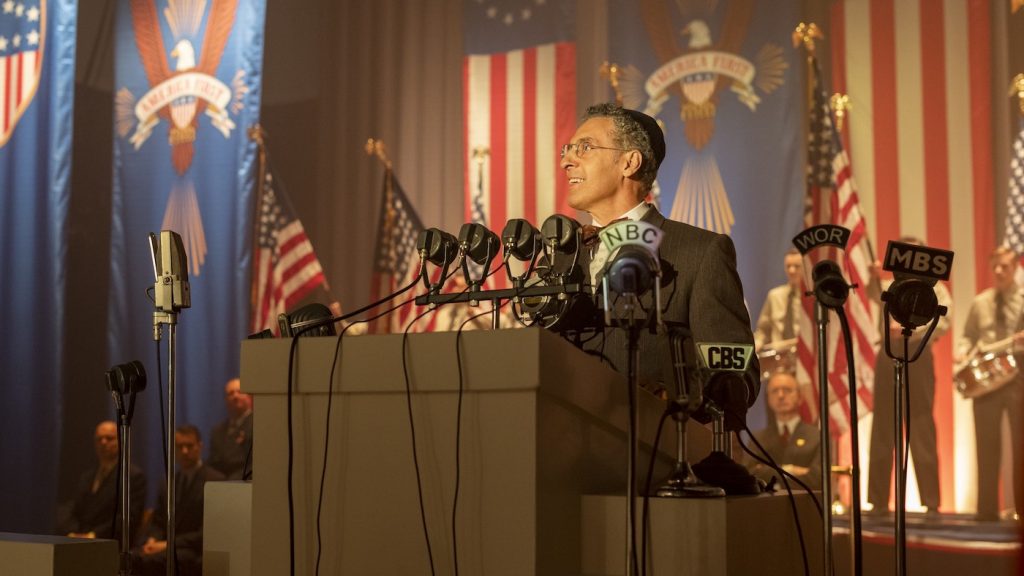 When word spread that The Wire mastermind David Simon would be adapting legendary novelist Philip Roth’s brilliant dystopian book “The Plot Against America” for HBO (along with executive producer Ed Burns, another The Wire alum), we were enthused. Now that the first trailer for the upcoming series has dropped, it’s safe to say the limited series is on our must-see list.

The story is set in a World War II-era America that looks very much like our past on the surface. Yet, the nasty twist here is that instead of supporting the war effort and Franklin Delanor Roosevelt, America instead chose nativist and non-interventionist Charles Lindbergh, who defeats Roosevelt in the 1940 U.S. presidential election and keeps America from joining the Allies in the fight against Hitler and fascism in general. The real-life Lindbergh was a famous pilot (he made the first nonstop flight from New York to Paris in 1927), but Lindbergh was also not only an advocate of non-interventionism in World War II, but he was also a supporter of Nazi Germany. Lindbergh claimed in 1941 that the three entities pushing for America’s involvement in the war were the British, Roosevelt himself, and Jews. So yeah, he was not a good guy. The idea of someone this brazenly anti-Semitic and xenophobic rising to the highest office in the land was clearly rich material for Roth to explore. Now Simon, his cast and crew are adapting that material at a time where our politics feels as volatile and partisan as ever before. Roth’s book would be a rich, dark vein to tap at any time, but obviously given our current political climate, The Plot Against America feels urgently topical.

Needless to say, in Roth’s terrifying novel, Lindbergh winning the 1940 presidential election spells immediate trouble for America in general and Jews in particular. And what a cast Simon has assembled. John Turturro, Winona Ryder, Morgan Spector, and Zoe Kazan lead the ensemble. Ben Cole plays Linderbegh. The trailer is as gripping as you might expect.

While The Plot Against America is a very different kind of adaptation, in nearly every conceivable way, from Damon Lindelof’s excellent Watchmen, the two share an alternate history version of an America in crisis. There’s a reason HBO keeps working with both Simon and Lindelof, and we’re eagerly anticipating—with a little bit of dread—that The Plot Against America will be hugely compelling.

Check out the trailer below. The Plot Against America debuts on HBO on Monday, March 16.

TAGSHBO The Plot Against America