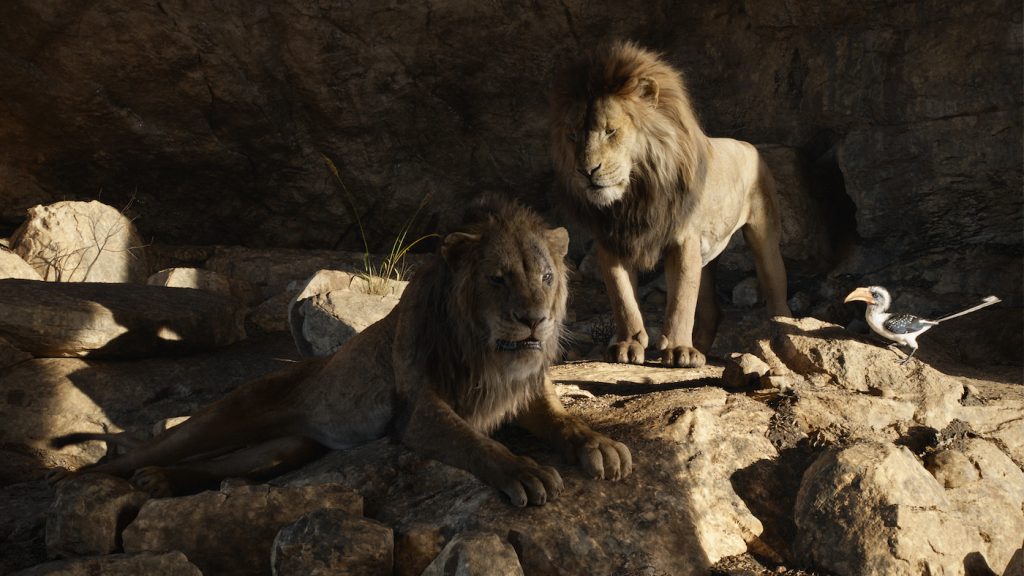 Earlier this year, Disney’s live-action remake of The Lion King landed as both a critical and box office hit. Pride Rock looked stunning. The animals appeared real. No creatures were harmed in the making of the film, and Beyoncé herself played Nala, protagonist Simba’s level-headed love interest and future queen. Alongside a star-studded cast, The Lion King also broke new ground in visual effects, using unconventional tools like a gaming engine and virtual reality, in order to apply live-action techniques to a new kind of liminal filmmaking, neither shot on a physical set nor reliant on traditional animation.

Among the most useful innovations was the gaming engine, which allowed the filmmakers to create, as visual supervisor Robert Legato put it, a “movie game.” Within this movie game, his team could move characters around, adjust the scenery, go wide or speed things up or slow them down, with the edits iterating in real-time, compared to rendering for 10 or 15 minutes with every change as they would in CG. Thanks in part to the speed of this new process, creating the film took only six months longer than its simpler predecessor, The Jungle Book (the visual effects of which Legato also supervised). With sets rendering in real-time and assessed from within virtual reality goggles, the crew were then freed up to use conventional filmmaking techniques, whether it was shooting from multiple angles or taking the time to “cast” the physical animals. With Oscars voting this Monday, there’s a good chance Legato and his team’s work will be nominated. We had the chance to speak with Legato on the effort that went into the film’s groundbreaking visual effects.

Can you tell me about the process of making one animal, from start to finish?

I’ll use Scar—he’s probably one of my favorite characters in the movie. You have the script and you have to determine what kind of lion he is. He’s skinnier, he’s not as filled out, he’s been in fights and scarred. You almost do a bit of a casting session—you look at all these various pictures and start to pick and choose which ones feel more like the character you want to portray. It’s similar to a movie. Once you have the character in the script, you find the right person to embody it. Then you start mixing and matching. We wanted to stay very close to what a real animal looks like and not exaggerate and create something you couldn’t find in nature. But you do have to make sure you get the story point across, so it’s a very fine line. And they can construct it based on, okay, how big is he compared to Mufasa? They’re in the same frame, how tall would he be, how wide would he be? What kind of coloring? You start from the ground up and they build a very accurate muscle structure and skeleton structure, so when you skin it with the body and face of Scar, it hangs correctly. That goes through a series of tests to get the right proportions, but it’s very close to real nature, since that’s the idea behind the film, that we’re making a live version of it. Those things could be real and we could’ve gotten a lion that looked that way.

Now the rig is constructed, animators can come in and move the various parts exactly as they move. You don’t want to exaggerate that, either. The muscles are built in such a way that a bicep moves, it balloons and moves the skin on top of that. You sort of screen-test the animal and the animators borrow behavior from real creatures. You start saying a little more of this and a little less of that, and lo and behold, you have a character. The voice helps inform it as well. That’s why I think the Scar character works really well—Chiwetel [Ejiofor]’s voice and acting style, and then the style the animators picked to create his behavior, meshed really well. He’s a completed thought.

What comes now that you have a walking, talking animal?

You light it, there’s screen-testing, and then the unsung heroes create all the hair and fur and add this air of believability because it looks like every hair is in place. That’s why it took so long to render because every detail was put in—every imperfection, every vein that pops and moves. All those subtleties, you’d miss something if it wasn’t there but you wouldn’t be able to put your finger on it. Now you have a character and need to animate it. Literally, you cast the body, put hair and makeup on them, and now they’re on the stage and you have to manipulate them to complete the characterization. It’s in that vein except it’s all done on the computer and not done in the physical world.

How does the shooting process work?

When we shoot a character, we put it in this virtual reality world to try to figure out how to shoot it as if we were on a live stage. And we would walk around the character, aim a camera at it, decide what lens and what kind of dolly moves there might be. And that’s a new innovation for this film compared to other ones, where you didn’t really walk into that world, you viewed it through a camera portal. That helps give it a sense of live-action. The cameraman, myself, Jon Favreau, Andy Jones the animation supervisor, were all able to walk around the set as we see it, but it doesn’t really exist outside a computer. But to us, it looks real. You can have fun lighting it, working with cameras and all of a sudden it comes to life as if you’re filming a real movie.

How did the virtual reality headset work?

You don’t wear it all the time. But you do put it on and inside you have audio and visual, a couple of panels that allow you to fly around the set or hop around or move a chess piece. Since we come from the live-action world, it’s easier to walk around something, bend on one knee and look up, try a different lens, and you’re into the world of real filmmaking more than a CG world. You’re actually inside the computer moving things around. We film it in such a way that we have dailies like you would on a live-action film. You shoot the same scene from multiple angles, vantage points, cranes, steady cams. And the editor has this kind of analog feeling for it. So life continues to breathe into it by making these analog choices. Once we set up the dolly and figure out the physicality of it, we then hop out and take the goggles off and operate the camera like you would on a regular set.