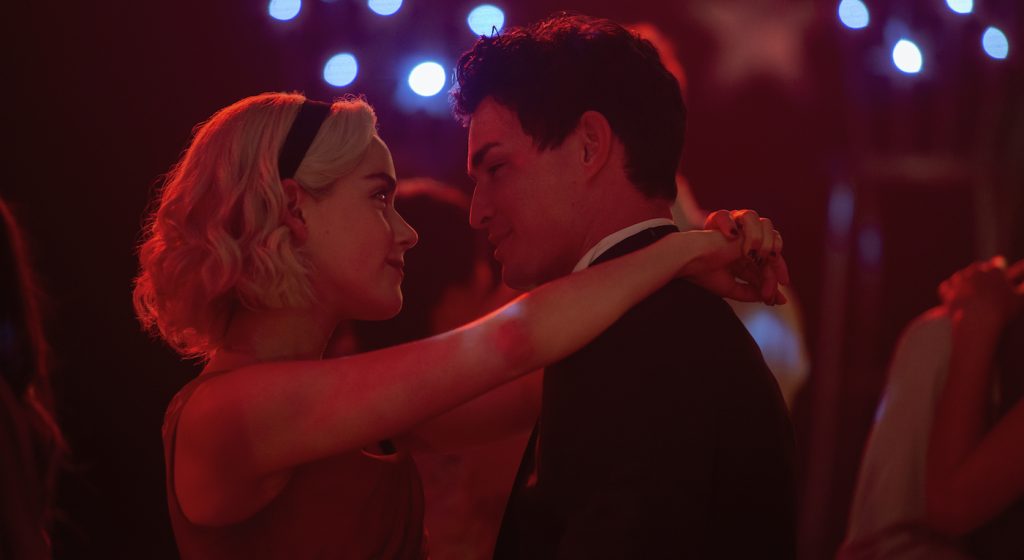 Just because her boyfriend’s been sent to hell doesn’t mean Sabrina (Kiernan Shipka) is giving up on him. Not even close. In a very charming, let’s go ahead and callig it a “chilling” new music video just released by Netflix, Chilling Adventures of Sabrina is teasing season 3 with a devilish beat and a nasty hook. The song is called “Straight to Hell” by Sabrina Spellman & Lovecraft. The vocals are in fact supplied by Kiernan Shipka herself, who dons cheerleader duds, which is a nod to the original graphic novels that started it all. Also present in the video are her dearly departed boyfriend Nicholas Scratch (Gavin Leatherwood) and Harvey Kinkle (Ross Lynch). Nicholas is not having the best time in the video—how could he, he’s chained up and shouting the entire time.

Season three will find Sabrina in a state of serious chagrin, considering her boyfriend Nicholas now contains the Dark Lord (he’s trapped inside him), thanks to Nicholas making the ultimate sacrifice. Nicholas is in Hell under the evil eye of Madam Satan (Michelle Gomez), not the best place to start the new year. Sabrina will need to rely on her non-magical friends, The Fright Club—Harvey, Rosalind (Jaz Sinclair), and Theo (Lachlan Watson)—to try and free Nicholas.

Of course, things will be difficult, very difficult. Sabrina will have to take on the title of Queen and face the Prince of Hell, Caliban (Sam Corlett). A mysterious carnival rolling into Greendale will present further complications for the Spellman coven.

But for now, just enjoy the music video, which is a delightful way to plug the new season.

Chilling Adventures of Sabrina returns on January 24. It’ll be an eight-episode season.

For more on Chilling Adventures of Sabrina, check out our interview with production designer Lisa Soper.