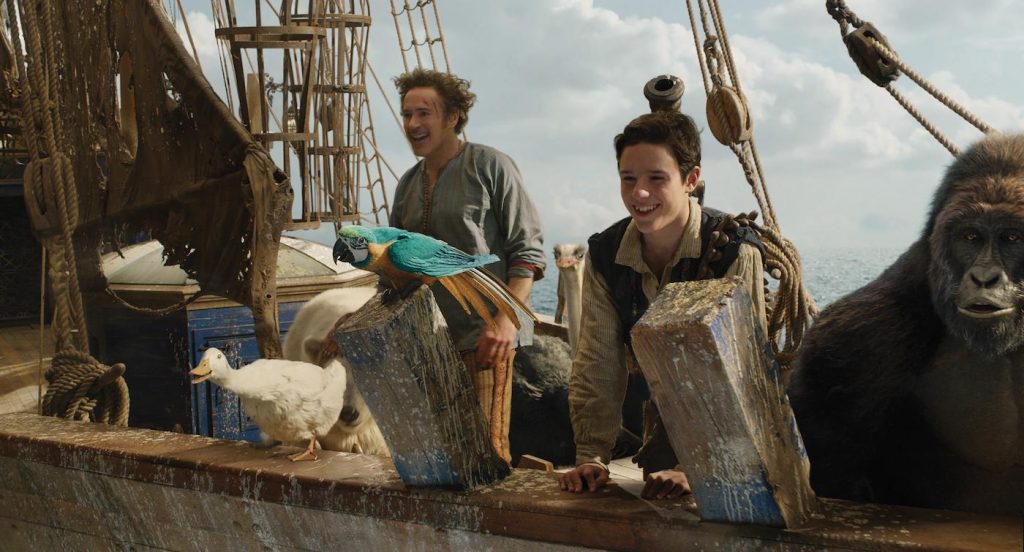 Building Dolittle’s Many Worlds of Magic Across England

Hugh Lofting’s original series of Dolittle books, published in the 1920s and 30s, is a perpetually well-loved set of source material for film and television. 1998’s Dr. Dolittle, starring Eddie Murphy, pulled the franchise into the 20th century U.S., but this month, the doctor who can talk to animals returned to his Victorian English roots. Starring Robert Downey, Jr., Dolittle reimagines John as a broken-hearted recluse taking shelter from humanity in a lovely, wildlife-filled manor gifted him by the queen.

“I really wanted to play him as something that was as different from Tony Stark as I could,” Downey said, “someone who has given up on humanity and never wants to see a human being again.” Having lost his wife, Lily (Kasia Smutniak) to one of her adventures on the high seas, John would remain happily sequestered but for the simultaneous arrival of two children, Stubbins (Harry Collet) and Lady Rose (Carmel Laniado). Stubbins, an animal-loving boy from a family of hunters, wants the doctor to heal a red squirrel he shot by accident, while Lady Rose demands Dolittle come to Buckingham Palace at once, in service of a mysteriously ailing Queen Victoria. The dreadlocked Dolittle is reluctant to leave the stately confines of his manor, outfitted with steampunk-style feeding contraptions, a surgery, and a comfortable library where he plays chess with Chee-Chee (Rami Malek), an anxious gorilla.

To find the right home for this celebrated character, director Stephen Gaghan and his crew looked at hundreds of houses. A large garden that would realistically allow a wide array of the animal kingdom to come and go was a particular requirement. The final location was found at Cothay Manor, in Somerset, a visitable estate that tends to place on best-of lists identifying England’s finest gardens—heartbreak aside, it’s no wonder Dolittle doesn’t want to leave this verdant, magical abode. But a far-reaching quest typical of the doctor begins nonetheless, with a giraffe and a fox dispatched to pull young Stubbins from his modest family home. Dolittle’s new protege doesn’t share the homebound tendencies of his mentor, and astride Betsy the giraffe (Selena Gomez), he races away from Puddleby-on-the-Marsh, an invented one-street rural village created on set at Langley Park.

Stubbins’s Welsh hometown was built from scratch due to the difficulties of de-21st-century-ing any comparable contemporary location, while the Buckingham Palace chambers of a youthful Queen Victoria necessarily derived entirely from Gaghan and production designer Dominic Watkins’s vision for obvious logistical reasons. Additionally, “Buckingham palace as we know it wasn’t built at the time of our film. Or maybe it was being moved,” said Gaghan in the film’s production notes. “But suffice to say it wasn’t the scale and magnificence of our palace.” The exteriors were shot at Blenheim Palace, while for the inside, Watkins infused a soundstage with ornate furniture, chandeliers, and general opulence, alongside imagined possessions specific to the film. It’s an octopus in the Queen’s aquarium who tips Dolittle off that something underhanded is afoot, sending the doctor on a perilous sea quest to the remote, sunny land of Monteverde.

Beginning with their journey aboard the Water Lily, Dolittle, Stubbins, and the animal gang runs into all sorts of trouble, of course. The Queen’s jealous doctor, Müdfly (Michael Sheen) is in hot pursuit, Monteverde is ruled by King Rassouli, Lily’s father who despises Dolittle, and the doctor finds himself locked up and set upon by Barry the tiger (Ralph Fiennes). This is one creature Dolittle can’t mollify, with the tiger suffering from migraines and mommy issues he blames Dolittle for leaving only half-treated. (Of this scene-stealing, complex creature, Downey said, “Ralph Fiennes knocked it out of the park, by the way. It’s all that Shakespearean training — it prepared him to play our tiger.”) From the vintage sailing ship to Monteverde’s sunny port and Eden Tree Island, a wondrous location guarded by a heartbroken dragon, all were built on soundstages at Shepperton Studios in Surrey.

While the vast majority of Dolittle was shot in England, one very special location was filmed in Southern California, with the film’s final set shot in Robert and Susan Downey’s own Malibu mini zoo (Susan is a producer on the film), populated in real life by the couple’s cadre of rescue animals including alpacas, chickens, goats, pigs, cows, and cats. Regarding which creature he’d choose to be able to communicate with if only he could, Downey pointed out that “there are very few things cuter than a kitten. And if I could speak to a kitten, I’d say, how can I be as cute as you? And I’d expect a damn answer, too.”

Dolittle is in theaters now.