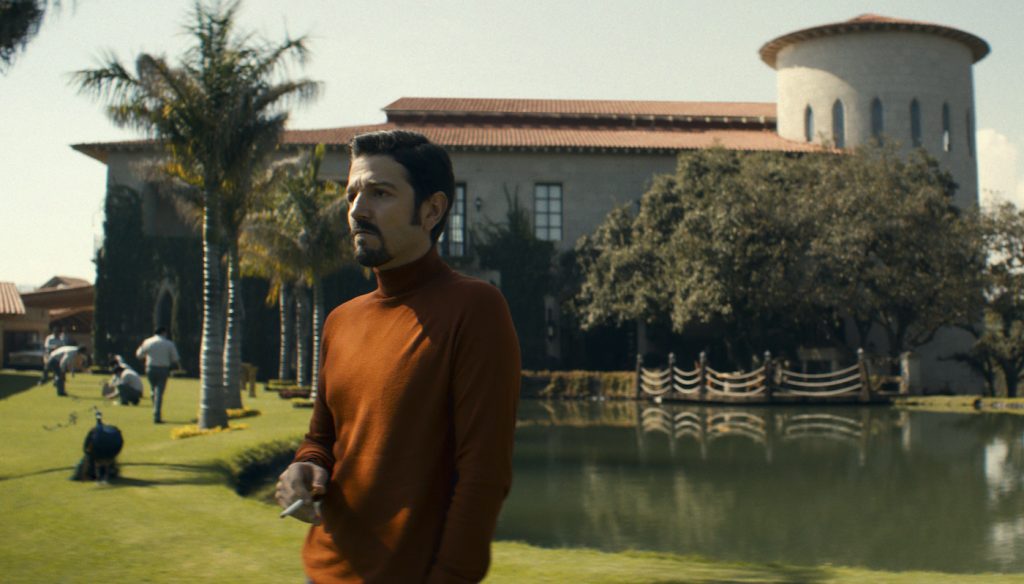 The last time we left Miguel Ángel Félix Gallardo (Diego Luna), commonly referred to as Félix, he had managed to talk his way out of imprisonment and stay atop the Guadalaraja Cartel—the first Mexican drug cartel—using his wits alone. Granted, in order to become Mexico’s leading narco-trafficker, Félix used a lot more than wits. He was ruthless in his rise to power, and inarguably brilliant, but he only escaped prison (or death) by cutting a last-second deal in which he promised to keep the secrets of powerful players in Mexico secret, so long as he was free to run his trade.

A new trailer for season two of Narcos: Mexico gets us up to speed with where Félix is since that narrow escape. The ever-ambitious leader was never going to be content with playing second fiddle to the Colombian cartels and their control of the cocaine trade. Season two will show how Félix aims to lead the most powerful narco-trafficking cartel in the world, but such ambition brings great risks.

One of Félix’s main sources of risk comes in the form of Walt Breslin (Scoot McNairy), a DEA agent determined to bring the elusive cartel leader down. “You want to dismantle an empire?” one of Breslin’s colleagues says, “divide it.” That will be one of the main tactics used by the Americans to try and topple Félix; target his top lieutenants and sew discord from within.

Check out the trailer below. Narcos: Mexico season two begins streaming on Netflix on February 13, 2020.

Narcos: Mexico season 2 continues the story of Miguel Ángel ​Félix Gallardo, now the Godfather of the first Mexican cartel – the Guadalajara cartel – as he struggles to maintain control, grow his empire, and reconcile the betrayals and sacrifices he had to make on his way to becoming El Padrino. As friction between the different “plazas” of his cartel rises, Felix’s control over the situation slips. Meanwhile, the death of DEA agent Kiki Camarena at the hands of the cartel and corrupt politicians brings a hailstorm of retribution to Mexico. “Operation Leyenda” led by the dogged DEA agent Walt Breslin, whose methods aren’t always by-the-book, targets Fé​​lix Gallardo and his chief lieutenants, adding to the instability and volatility of the cartel.