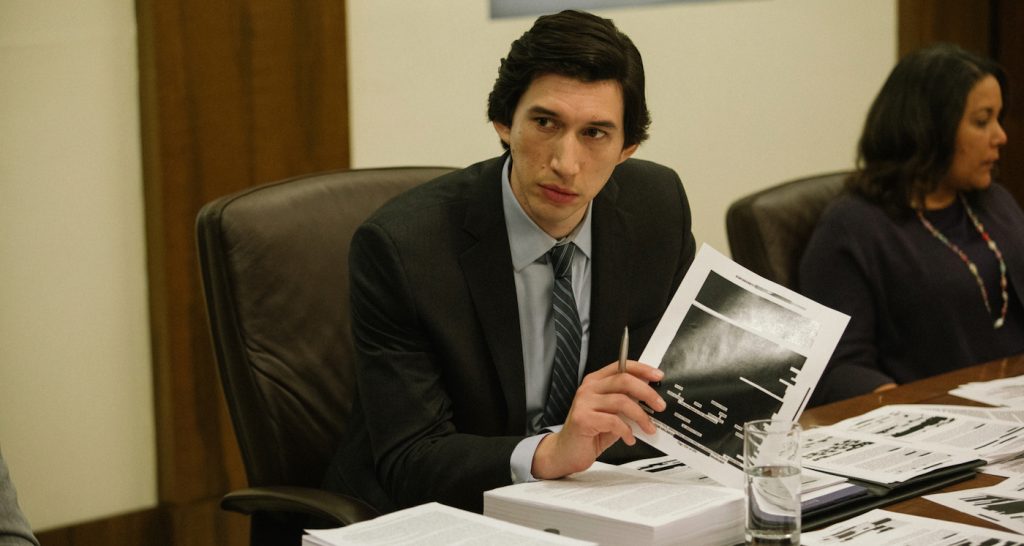 The Report’s Production Designer On Recreating a World of Conspiracy

Find the mental capacity for another deep dive into the darkest corners of U.S. government and policy, but put away the newspaper. We’re winding back the clock to the beginning of the Aughts, when the CIA first implemented its “enhanced interrogation techniques,” or what most regular folks would call torture, at black sites around the world. The average American citizen didn’t learn about what the CIA was up to until after the program was shut down, and its brutality may never have been publicized at all, had a Senate staffer named Daniel Jones not spent seven years investigating the CIA’s activities and their cover-up.

The Report, a new film from writer-director Scott Z. Burns which will be released theatrically on August 15 and begins streaming on Amazon on November 29th, depicts Jones’s (Adam Driver) work as it metastasizes into a seven-year effort and a 6,700 page report, toggling between the future whistleblower’s eager start as an investigator, his work for Senator Dianne Feinstein (Annette Bening) on the Senate Select Committee on Intelligence, and a ruthless portrayal of the CIA’s secret torture sites, in Afghanistan, Thailand, and Eastern Europe.

The Report shines a bleak and thrilling spotlight on the meticulous work that went into uncovering this particular chapter of depravity in recent U.S. history. Throughout the film, there’s a persistent sense of nothingness around Jones—no support, no belief, no truth, no trust. After losing two colleagues to the work’s emotional attrition, we watch the staffer go it alone for years on end in his basement office, the film’s sets steering viewers toward the resemblance between Jones’s intensely solitary toil and the captivity of the subjects he’s trying to understand.

“You have this character based on the real person, Dan Jones, who is dissecting every communication thread he can in a secretive agency in the basement of a windowless room,” Ethan Tobman, the film’s production designer, explained. “There’s obviously parallels between where he is obsessing and researching and the windowless prison cells in Afghanistan and Thailand and Eastern Europe where the interrogations are taking place.”

Despite the bombshell information he gradually uncovers, Jones’s situation barely improves upstairs, whether he’s convening with a lawyer or making his case in the SCIF, a protected space where senators meet on sensitive issues. Jones encounters disbelief or worse, censorship, in bleak, lightless spaces that further highlight how alone he is in his work. “These are all windowless rooms where people feel really isolated,” said Tobman, “so exploring a negative space environment like that is visually powerful.”

Through a series of atmosphere-less offices, the film explores truth, deception, and power—until the story shifts out of the U.S. to the sites of the crimes themselves. A crappy, fluorescent-lit basement bureau is still no torture chamber, and beyond the obvious, The Report uses stylized color to describe shifts in location and time. In Jones’s present, in Washington, “we see extremely blue, cold, antiseptic environments,” said Tobman, but moving earlier, to the era between 2001 to 2006 that he’s researching, “they’re in warmer, stickier, more desert-like climates geographically,” and the cinematography takes on earthier tones. “We’re trying to make a very careful visual shift that’s really obvious and that elicits emotions, so you really know from the first frame of a scene where you are and when you are,” said Tobman. Even with the distinct tonal difference, however, leaving the scene of waterboarding, to watch Jones fighting to unearth that waterboarding, offers little relief.

This is thanks in part to the rigor with which the film portrays three countries’ worth of increasingly complex secret torture sites. For Tobman, crafting these sets was a research-heavy endeavor reliant on approximation to achieve precision.

“I always say on every movie, you start off two weeks behind schedule on your very first day. On a movie like this, I felt like I was starting seven years behind schedule,” he said, with Jones and Burns already having spent seven years discussing the report that previously took Jones seven years to write. “Scott, being as factually obsessed as Dan Jones in his own process of writing, has amassed some extraordinary characters who serve as advisors—we’re talking about former Navy Seals, journalists, human rights advocates, lawyers, people who had access to people who had been to black sites, but not people who had been to black sites themselves,” Tobman explained.

The advisors’ accounts didn’t always line up, and so Tobman additionally delved into contemporary news reports to extrapolate the right feelings—“dry, cramped, dirty, cold”—in order to put together credibly horrendous recreations. Whereas the crude locations in Afghanistan and Thailand mimic the Vietnam-era repurposed military facilities where these sites were built in real life, “when we get to places like Europe, [there’s] an enormous influx of money to a largely unsupervised program that the government is not being transparent about in any way,” said Tobman. “We know now that they’re employing things like glass windows, one-way mirrors, we know that they’re waterboarding, so they’re going to have an irrigation system. They’re going to have drainage and pipes and tile for the purpose of being able to torture people quickly and efficiently, and as horrifying as it may sound, to run it as a factory. So all of those things end up being part of the design choices, too.”

Given the variety and exacting execution of these design choices, it comes as a surprise that The Report’s 76 script locations were shot “within 20 square miles of the Empire State Building,” said Tobman. “This is a movie where you’ll watch it and think yeah, they went to a few locations, and maybe they got access to the actual sites in Washington where some of the things took place. It couldn’t be further from the truth. This entire movie was shot in New York City, 70% of it is constructed on sound stages. We don’t live in a time right now where these types of movies are given money to play with.” Tobman referred to the process as a “Rubik’s cube,” albeit a rewarding one, based on the incredibly positive reactions the film has garnered since its Sundance premiere.

For the production designer, who has worked on marquee projects like Beyoncé’s Formation and Lemonade, Room (which starred Brie Larson as a woman held captive for seven years with her young son), and Beautiful Boy (about addiction and recovery, based on the memoirs of father and son David and Nic Sheff), The Report is a logical choice in an arc of projects that “either upset or inform social justice through filmmaking,” as he put it.

“Doing a movie like Room, I always joke, I wonder what my life would be like if I did romantic comedies.” He recalled the old Kurt Cobain quote, ‘just because you’re paranoid doesn’t mean they’re not coming to get you,’ drawing attention to a second, equally significant reason to watch a movie like The Report, particularly at this moment in time. “You start thinking, what programs am I not aware of right now? What Geneva Conventions are we breaking as we speak?” he asked. “You start having really justified paranoia because, let’s face it, the world is full of secrecy, and a lot of government institutions that make mistakes go forward without checks and balances. Hence the reason why making a movie like this is so important.”