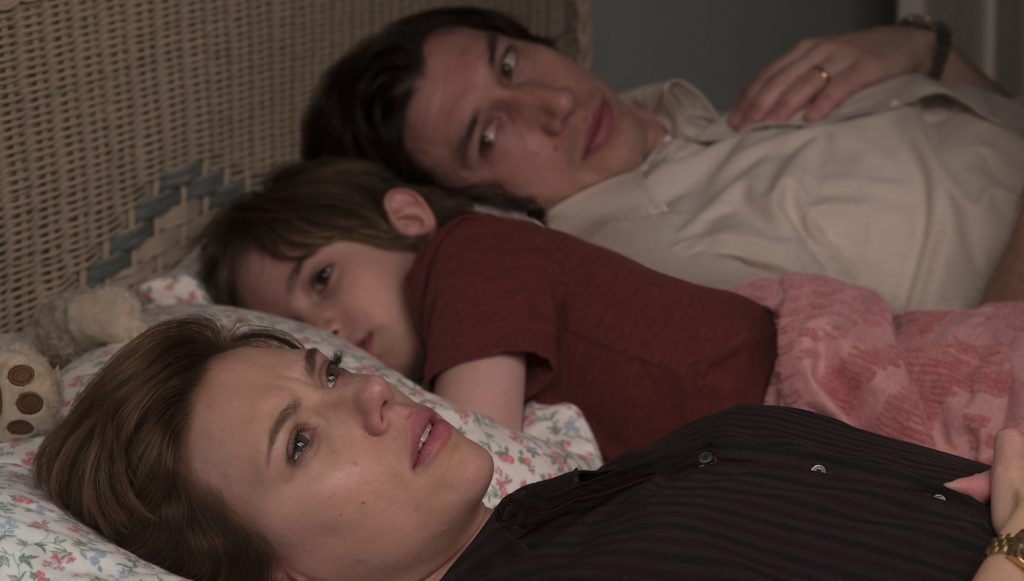 Marriage Story’s Production Designer on Creating an Environment of Heartbreak

Production designer Jade Healy doesn’t seem to repeat herself much—particularly with the kinds of films she designs, and even the directors she works with. Though as the work remains eclectic, it grows steadily more renowned, and the latter, at least, is changing.

She’s the designer for Marriage Story, director Noah Baumbach’s story of a marriage’s implosion that is heartbreaking for its specificity and its refusal to take sides. Adam Driver is Charlie and Scarlett Johansson is Nicole, two loving parents to their son Henry who find themselves in a marriage that’s ending, even if it’s not quite loveless. The Netflix-produced film has earned rave reviews coming out of the festival circuit and has only picked up steam as it’s made its theatrical debut and nears its December 6 release date on Netflix. It’s not hyperbolic to add that Driver and Johansson do some of the best work of their careers.

This particular marriage story is divided between New York and L.A., just as one of the tensions between Driver’s Charlie and Johansson’s Nicole is whether to stay with the artistic rewards of the theater in New York or follow the pecuniary rewards of TV in L.A.

As for Healy, some of her more recent work has been set in the old west (In a Valley of Violence), haunted houses (A Ghost Story), Olympic ice rinks (I, Tonya), and Mr. Rogers’ Neighborhood (A Beautiful Day in the Neighborhood). And she’s re-teaming with Ghost Story’s director David Lowery, for Green Knight, a re-telling of the Round Table’s Sir Gawain tale.

Healy laughs that she can add Medieval fantasy to her design repertoire now, but also notes that her work on Marriage Story was almost a re-teaming, too. “I helped (Baumbach) on a short film,” she recounts, then “met him (again) for The Meyerowitz Stories,” the director’s also Netflix-produced tale with Dustin Hoffman as an aging artist, and Adam Sandler among the adult children struggling with his—and their own—legacies.

And while she didn’t wind up designing Meyerowitz, things came together for this sundering Marriage. Of the story’s two geographical poles, she says “we all have our own relationships with L.A. and New York. I had this idea in my head of how the light is,” and, she adds, how the colors were—browns and grays, oranges on the subway, and “the dark greens of New York (contrasted with) the paler greens of L.A.,” along with the latter’s’ “sun-kissed colors.”

But the prep work also consisted of looking at how others relate to the light and look of the two metropolises, including “a lot of images of different photographers,” particularly that of a real-life Meyerowitz —photographer Joel—and his “stuff on L.A.”

For NY visuals, she’d watch—with Baumbach and other creative keys like DP Robbie Ryan (who shot the director’s previous film)—a lot of 70’s films.” The visual references are collected on the websites she makes “each time I do a movie. It becomes the visual bible,” which she can then share with the rest of the crew.

But the process isn’t simply one of color gradations, even if deceptively neutral colors reflect story-driven choices: “The whites in New York,” she observes, “are dirtier, and warmer, the whites in L.A. are cooler—that was our intention.”

But it wasn’t only colors, dirty or cool, that revealed character: “Charlie is drowning in space,”: she says of his forays to Los Angeles. By contrast, in New York “he’s surrounded,” but in good ways: By his theater company, by books in his apartment, etc. Conversely, out on the Left Coast, “Nicole is expanding in the space…in New York, she didn’t have space to be what she wanted.”

Charlie, though, has a hard time expanding into any of L.A.’s spaces. At a recent screening, Baumbach commented how hard it was to find the kind of empty apartment they wanted for Driver’s character—though he acknowledged he was also looking for certain specifics: Such as a kitchen divided, yet still visible from, the living room, so characters could talk, yet be physically separated at the same time.

Healy confirms how difficult it was “to find that apartment. We wanted a banal, boring space. But when you walk into it, you say ‘oh, this is it!’ I find beauty in banal spaces.”

And though Charlie grudgingly decorates it—the divorce, the transcontinental division of the family are all things he accepts grudgingly—they wanted to “keep it really minimal—it didn’t say much.” Or rather, it says of Charlie “I’m not spending any time thinking about the furniture,” or anything else connected to this sundering, if he can help it.

The apartment wasn’t a set, it was one they found in and leased in a Hollywood neighborhood, but they “painted it (and) put the carpet in, so it was tonally the same” throughout. With the exception that his son, Henry, has the one room “that has life in it. (Otherwise) it’s a sad house. You feel sorry for Charlie.”

Charlie remains torn between his son’s new life with his mother in L.A. and wanting to get back to work in NY, with a beckoning production of “Electra” headed for Broadway. Nicole, meanwhile, expands further into L.A.’s space by turning from acting in television to directing it.

But geographical insights and rewards notwithstanding, the couple remains split. And while many of the places and spaces were ones the production found, for some scenes, they still had to build what they needed. There’s a key moment involving a stuck driveway gate, which Charlie helps Nicole close after returning Henry for the evening. Working each side of the long wooden gate, the couple is simultaneously close—almost nose-to-nose—yet heading toward being resolutely divided, once their mutual task is done. There are echoes in the moment of the together-yet-separated space found for Charlie’s apartment, where a lacerating argument between the couple unfolds.

The moment at the closing gate also epitomizes where so much of the sadness and insight of Marriage Story. That impetus to split overwhelms any brief coming together along the way. No matter how cool the light, in other words, things continue to heat up for Charlie and Nicole. The ending of the union showing the flip side of the heat generated when it was new. (Also mirroring a certain symmetry in the film’s narrative structure.)

That ebbing and flowing of hot and cold emotions was also a motif in Healy’s pre-production work. She recounts sitting down with Robbie Ryan, something she likes to do with all her DPs, when possible, and asking: “what’s the quality of light you’re after?” she says. “I want to make sure I have the right temperature.”

Marriage Story made its theatrical debut on November 6 and will stream on Netflix on December 6.