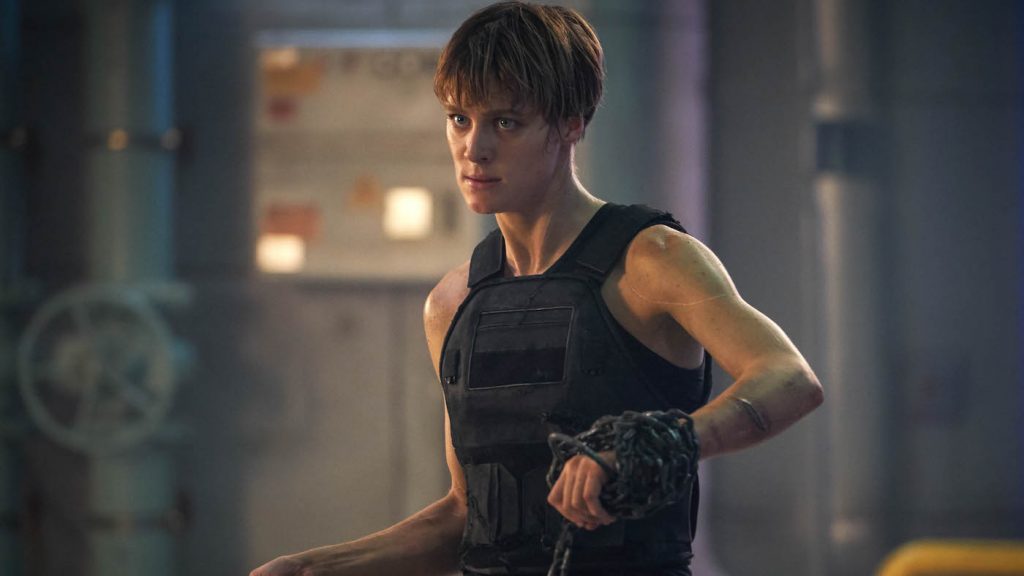 In Tim Miller’s Terminator: Dark Fate, there’s a new focus of homicidal obsession for a time-traveling Terminator—Dani Ramos (Natalia Reyes). She’s the person the new Terminator (Gabriel Luna) is after, yet we still don’t know the reasons why. What we do know is Dani will need help if she’s going to survive, and she’s got that in spades. Her protectors the return of Linda Hamilton’s Sarah Connor and Arnold Schwarzenegger‘s original T-800. Those are some powerful allies. In a new international trailer released by Paramount, we get a much longer look at Dani’s still-mysterious role in all of this. Why does the new Terminator want to kill her? What is it about her future that’s so important?

Dani got a third protector in the mix; Mackenzie Davis as the completely bad-ass Grace. Here’s what Tim Miller told Variety about Grace’s crucial role in this film:

“Joe Abercrombie [writer of the First Law series], who pointed out that the Terminator films tend to have a trinity of main characters,” Miller told Variety. “One of those is the protector, the Kyle Reese character. Joe came out with this idea that a new protector from the future is a machine fighter. It’s a painful life, and they’re scarred and take a lot of drugs to combat the pain of what’s been done to them. They don’t live a long time. It’s a very sacrificial role; they risk death to save others. And from the very first suggestion it was always a woman. We had to look for someone who has the physicality, but I’m very sensitive to actors. I didn’t just want a woman who could physically fit the role but emotionally as well. Mackenzie really wanted to do it; she came after the role. She worked harder than anybody.”