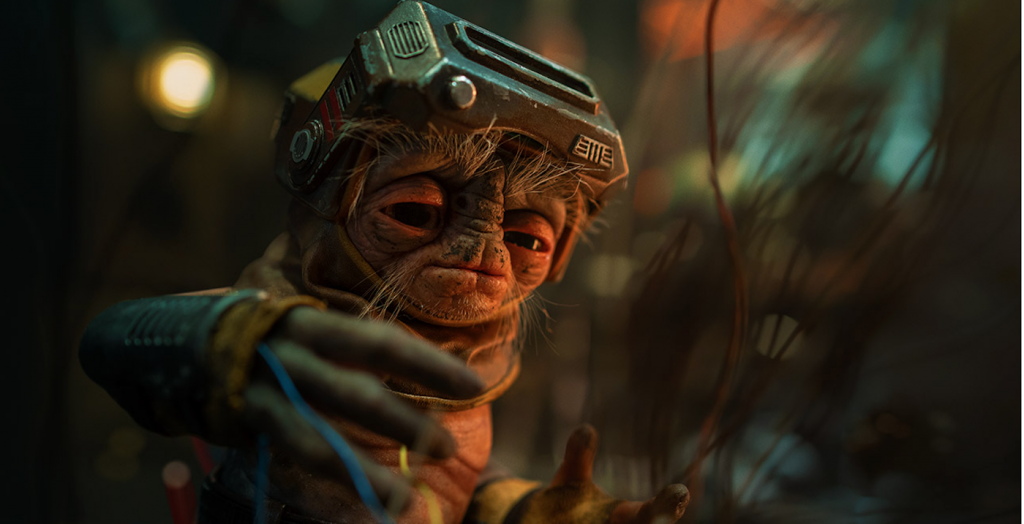 Check out This Glorious New Alien From Star Wars: The Rise of Skywalker

His name is Frik. Babu Frik. He’s a handy dandy Anzellan droidsmith and he’s as talented as he is cute. He’s a new Star Wars alien and he’s here to help. He’ll be appearing in Star Wars: The Rise of Skywalker and by the itty-bitty description we’ve got of him, we have a notion on how, exactly, he might be of service.

The introduction of a new Star Wars alien is now a 36-year long event of feverish debate, ever since Ewoks first appeared in 1983’s Return of the Jedi and everyone had a pre-Internet opinion on them. Now, it’s obviously much easier to transmit your immediate feelings about every fresh inclusion into Star Wars alien ranks. When folks got their first look at the Porgs in Rian Johnson’s Star Wars: The Last Jedi, the adorable Puffin-like creatures who live peaceably on Luke Skywalker’s Ahch-To, you could hear a massive awww sweep across the globe. Star Wars aliens come in many flavors, from the animal-like to the more humanoid. For the alien animal kingdom, you’ve got purely adorable creatures like Porgs, the beautiful, near-mythical beings like the crystal foxes (known as vulptices), and beasts of burden like Banthas and Tauntauns. (To say nothing of the alien-animal species that are dangerous, deadly, and utterly inhuman.) The humanoid aliens—that is, aliens who can talk to the human characters and do human things—run an even wider gamut. The blue, four-horned Chagrian, the red, Devil-looking Devaronians, the Gungans, most famously and disastrously realized in the persona of Jar Jar Binks, to the Mon Calamari, most famously and honorably embodied by Admiral Ackbar in Return of the Jedi.

Enter Babu Frik. StarWars.com has introduced this new, vaguely cat-like alien into the world after last week’s Triple Force Friday, in which the alien appeared in tiny plastic toy form. Now we’ve got this detailed photo of him, and have learned he will have a part to play in J.J. Abrams’ upcoming Star Wars: The Rise of Skywalker. The official Star Wars website has released a bit of information about Babu Frik, which leads us to believe that he might have a crucial role to play in the 9th and final film in the Skywalker Saga.

Here’s how Babu Frik is described on StarWars.com:

Star Wars: The Rise of Skywalker arrives in our galaxy this December — and today Lucasfilm and the film’s eight promotional partners have joined forces via a coordinated social moment to reveal a first look at Babu Frik. The tiny Anzellan droidsmith, first glimpsed in toy form during the Triple Force Friday livestream event, works among the Spice Runners of Kijimi and can reprogram or modify virtually any droid — regardless of the security measures protecting its systems.

Fix any droid, you say? Fix any droid “regardless of the security measures protecting its systems” you say? If you’ll recall, we saw a brief glimpse of a red-eyed C-3P0 in the last Rise of Skywalker footage we got. The initial speculation was that C-3P0 had been captured or turned somehow by the First Order. Might our new friend Babu Frik be called upon to held hack or fix the fussiest droid in the galaxy?