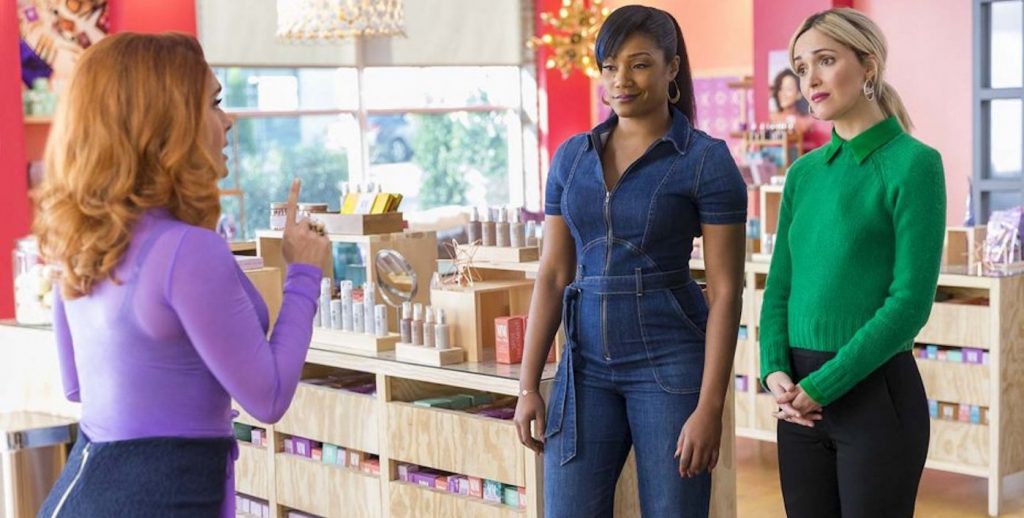 Succession director Miguel Arteta has got quite the cast for Like a Boss. We all know that Tiffany Haddish is a comedy legend at this point, and Rose Byrne has proved herself an expert comedic actor in her own right, from Bridesmaids to Neighbors. Now this dream team is together in a script from Sam Pitman and Adam Cole-Kelly about two best friends and business partners whose friendship is about to be put to the test. Byrne and Haddish play Mia and Mel, a pair of beauty moguls whose business is just a touch underwater—try a half a million bucks in debt’s worth of water. In swoops Claire Luna (Salma Hayek), a cosmetics industry powerhouse with plans to give the ladies a fat loan, with a few conditions. Paramount released the first trailer, which gives us a tasty morsel of what could be a very fun early 2020 comedy.

Joining Haddish, Byrne and Hayek are a slew of top-notch comedy talents—Billy Porter, Jennifer Coolidge, Karan Soni, and Ari Graynor are all on board. Check out the trailer here:

Here is the official synopsis for Like a Boss:

Best friends Mia and Mel (Tiffany Haddish and Rose Byrne) are living their best lives running their own cosmetics company they’ve built from the ground up. Unfortunately, they’re in over their heads financially, and the prospect of a big buyout offer from a notorious titan of the cosmetics industry Claire Luna (Salma Hayek) proves too tempting to pass up, putting Mel and Mia’s lifelong friendship in jeopardy. The beauty business is about to get ugly. LIKE A BOSS also stars Billy Porter, Jennifer Coolidge, Ari Graynor, Natasha Rothwell, Jessica St. Clair and Karan Soni.