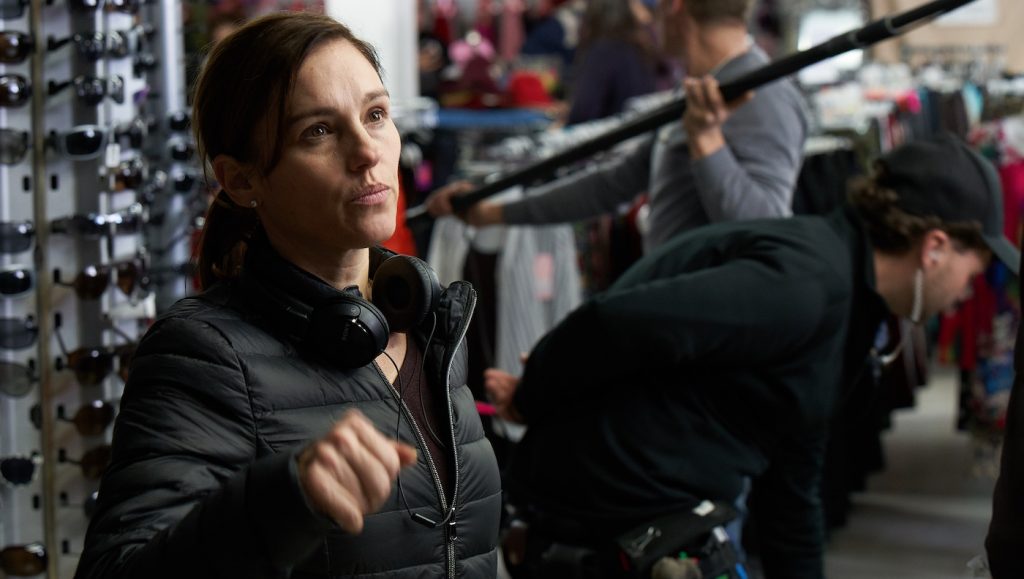 Director Amy Jo Johnson‘s second feature film manages to coax humor from situations that are not terribly funny. Terminal alcoholism, cancer, and feelings of loneliness, isolation, and insecurity are not usually the ingredients for laughs, but Johnson and her stellar cast turn these devastating pieces into a bittersweet whole. Johnson, a former actress (Felicity, Flashpoint), has a deft touch with her game ensemble, which stars Felicity Huffman in a bravura performance as the always dying Tammy, and an equally great Anastasia Phillips as her dutiful, doleful daughter Kathy. The best way to sum up the alcoholic Tammy is by using her own words (written by screenwriter Joanne Sarazen)—she’s a good time but not a good person.

Set in Hamilton, Ontario, a drab blue-collar town 45-minutes south of Toronto, Kathy is forever looking after her self-destructive mother. If Tammy’s not perched up on the edge of a bridge, feinting at suicide (there’s a net to catch any would-be jumpers), she’s getting smashed and putting her head through a wall (literally). Things only get worse when Tammy’s diagnosed with cancer and Kathy moves back into her house to care for her. If it weren’t for Tammy’s oldest friend and Kathy’s only friend, the paternal Dougie (Clark Johnson), both women would be pretty much all alone in dealing with this trauma.

We talked to Johnson about her nimble second feature after catching the premiere at the Toronto International Film Festival.

Let’s start with Joanne Sarazen’s script, which is unusual in many ways. How much did it change from the first time you heard it read to when you were ready to film?

There was an evolution of the script for sure. Not necessarily the core of what she’d written or her intentions, but a few things came into play, even logistically. Then when Felicity Huffman got on board, she had things she wanted to clarify and to make sure this was a story of redemption. We went through a number of passes with Joanne and she was just amazing. She even stayed with us during shooting. She’s a playwright, and it’s interesting because the script is written like a play. There’s a lot of these long scenes of dialogue between two people. Sometimes that doesn’t translate perfectly onto the screen, so you have to add these little beats and moments.

Felicity Huffman’s performance is so compelling, and she and Anastasia Phillips have fantastic chemistry. How much time did you get to rehearse them together?

Felicity flew in maybe a week before. We had a week of all getting to know each other, myself, Anastasia, and Felicity sat in a room for 3-4 days, reading the script together. Both of them are such hard workers and they know how to do their homework. They both work very differently, too, which is interesting. For Anastasia, her mom had passed away from cancer, and it was really a cathartic experience in playing Kathy, which makes her performance feel effortless to me. Felicity came with these teeth she could turn yellow and grew out her hair with all these grays. She transformed into Tammy, who is quite intimidating and unpredictable. For me, as a director, it was really intimidating, but it was so good for me. I had to show up and engage with her and guide her. I found out in the editing room just how generous she was. I had to make sure the way we edited her performance was grounded because she was grounded. She gave a lot.

The film opens with Tammy absolutely wrecked, in ripped nylons, clambering up onto the edge of a bridge. Right from the start, you’re in her desperate, drunken world…

I remember the first day and her climbing up on the bridge, she was tethered by our stunt team, but still. She turns to me and the assistant director and says, ‘If I die, keep the cameras the rolling.’ I was like, did she just say that? [Laughs]. It was pretty cool to watch.

The way she moves, the way she carries herself, that physicality is really incredible and tells her story just as much as the dialogue.

It reminds me of the first day again, we were doing camera tests with her bald cap. She comes walking in and she reminded me of Christian Bale in The Fighter, there’s just this way about her. A totally different person walked into that room. She physically went there. That scene in the doctor’s office when she gets her cancer diagnosis, all of those facial expressions she makes are so interesting.

The story also looks at the way people can start grieving even before they lose someone. The moment Tammy gets her diagnosis, Kathy’s life changes.

Right. There’s a grieving point that’s happening, even before the end of the film. I know from my own experience with my mother passing away from cancer, and my dad struggling with depression and alcoholism, I’m grieving before he’s even gone. I love that this movie explores it.

Hamilton, Ontario is not a beautiful town, but it works for your film beautifully. How’d you find it?

It’s 45-minutes from Toronto. On the way to Niagra. When I got the script, the intention at first was to make it this ambiguous city that could be anywhere, but when Felicity came on board and got down to doing her homework and figuring out her accent, that’s when I realized I had to know exactly where the town this is, because Felicity wants to be really authentic. Initially, she was coming up with dialects that were more Rochester, New York. So when I found the bridge in Hamilton, I was like, ‘Let’s just make it Hamilton.’ This simplified things. It was a great city to shoot in, I just love it aesthetically, with all of those factories on the water. They’re beautiful, in this really raw way. And that works, because the movie is raw.

Without giving away the ending, I just wanted to know whether that, too, was in the original script?

That is the ending Joanne wrote, the one I first heard at the Canadian Film Center reading. That ending went through a lot of different forms throughout the process. There was a moment near the end before we locked picture and I’d lost that ending. We’d gone another route. I had a mentor, and he asked me what was the movie I wanted to make, and I said it was the one with Joanne’s original ending. ‘So there’s your movie,’ he said. That’s the ending that’s the most cathartic for me, and it makes me happy in a bittersweet kind of way.

Tammy’s Always Dying is having its last screening at TIFF this Saturday at 1 pm.