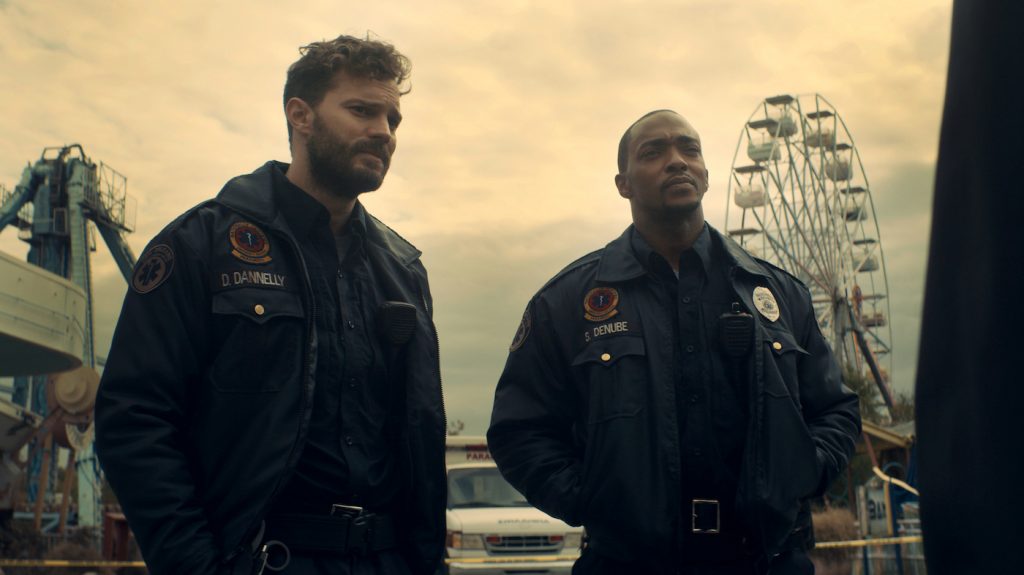 Anthony Mackie (Avengers: Endgame) and Jamie Dornan (Fifty Shades of Gray) are well known for playing superheroes and super seducers, respectively. For Aaron Moorhead and Justin Aaron Moorehead’s trippy, gripping new drama Synchronic, which had its world premiere at the Toronto International Film Festival, the two stars went a decidedly different direction. Mackie and Dornan play a pair of paramedics in New Orleans, longtime best friends plying the same job but at very different points in their lives. Mackie’s Steve is single, living his life primarily at night—either working or hooking up. Dornan’s Dennis has been married 18-years, has an 18-year old daughter Brianna (a terrific Ally Ioannides), and a wife (Katie Aselton) he loves but doesn’t seem to appreciate.

Only Synchronic is not a domestic drama. Not really. Nor is it really a film about paramedics. It is both of those things, and also a mystery and sci-fi freakout. If you want to go into Synchronic without knowing a thing, you can stop reading here.

The film opens with Steve and Dennis answering a call to a gruesome crime scene. A man has been stabbed in what appears to be a druggy party gone horribly awry. Only there’s something more at play here—the camera spots something Steve and Dennis miss, an antique sword covered in blood. There’s your weapon. From this scene on, their lives are upended as they’re drawn into a mysterious subculture in which users of a designer drug (called Synchronic) cannot be relied upon to stay put in our pedestrian linear experience of time. They also don’t stay alive for very long. Once Brianna goes missing after a party in which she took synchronic, the mystery deepens and the stakes rise.

On this level, Synchronic functions well as a mystery film—where’s Brianna? Yet Copeland and Moorehead have threaded her disappearance together with a story about Steve’s health (he’s been diagnosed with brain cancer), the perception of time (and the drug that alters it), and the grim fate that awaits us all (time will run out). Kudos to any filmmakers who can deliver a story about the lives of paramedics and pair it with a wooly mammoth, the war of 1812, and a very dangerous conquistador. We spoke with Moorhead and Ioannides about coming together for this trippy adventure through space, time, and New Orleans.

Let’s start with the script. How did this idea come about?

Aaron Moorhead: The first iteration of the idea came in 2014 when we were here in Toronto. We were at a bar that was playing Back to the Future. It’s one of my favorite movies of all time. We made some offhanded joke like, ‘Man, this movie wouldn’t work at all if Marty McFly weren’t white.’ You can’t get up and jam to Chuck Berry! You can’t just do that.’ So that was just a funny joke, but then we realized that’s funny for us, but that’s someone’s reality. Then Justin came up with the idea for, hey, imagine if you took DMT, but instead of it giving you a psychedelic experience, your doors of perception were instead all about time, and you could see time the way it’s viewed in physics.

Moorhead: Which is that time has already happened and is happening simultaneously, but we can only perceive it in a linear fashion. So we thought, okay, that’s a really interesting hook. If you took a pill and it let you see time in a non-linear fashion. After that, we knew we needed a mechanic to investigate that idea. We didn’t want it to be two police officers because we didn’t want our characters to be empowered to figure it out. If they’re a cop they can literally kick down a door and pull a gun and get any answer they want. That’s starting them in too privileged a position. So we put them in the healthcare industry, with one of them dealing with their own pending death, and those two things end up tying together.

Ally, when you read the script, what were your first thoughts?

Ally Ioannides: No one prefaced the script for me saying it would be a really good fit for me or that I’d like it, I just read it and thought it was amazing. I was really intrigued. I love sci-fi, so I really respected it a lot. I find drugs really interesting, so I found the designer drug aspect compelling. When I started reading the script, I didn’t expect it to go where it went, so that kept me really interested. I just loved it, it’s one of my favorite scripts I’ve ever read.

Your character’s relationship with your parents wasn’t the run-of-the-mill angsty teenager who loathes them on sight. You’re clearly experimenting with being an adult, and it’s strained, but before you go missing there’s also clearly a lot of love there.

Moorhead: It’s not the relationship I ever had with my parents, or Justin had with his, but it seems like that’s the only relationship that gets depicted in films is an antagonistic one. Brianna and her parents have a realistic disconnect, despite them being almost the same generation because they had her so young.

Ioannides: I think she thinks her parents are really cool, actually.

There’s a lot of intriguing speculation in your film about the human brain. You tie Anthony’s character’s tumor on his pineal gland to the designer drug —how hard was it combining these two plot points?

Moorhead: A lot of people think the pineal gland is the third eye and seat of the soul. Right now, all they know is that it secretes things that regulate our sleep and our body, but it also holds a whole lot of mystery. It’s one of the more mysterious parts of the brain. We tried to tie together as neatly as we could the idea of a man dying of brain cancer and a perception pill, so you can see the flow chart where those things are together.

From a production standpoint, you shot in New Orleans for three months. This story demanded some really tricky production, from the time travel to the murder scenes…

Moorhead: We have a producer we’ve always worked with named David Lawson, and he trusts us implicitly, and he knows that when we say, ‘Here’s how it’s gotta go,’ he’ll make that happen. It was extremely hard, to be honest, but we were able to double up some locations, which was really fun. Our production designer Ariel Vida is an incredible director in her own right, but bleeds, sometimes literally, for the films she works on. She had to rebuild the French Quarter on a very low budget.

The opening scene, that baroque murder scene with the antique sword, is all done in one take. How’d you pull that off?

Moorhead: When we decided that scene was all going to be one take, Justin and I spent a few hours designing the shot itself on paper. Then we got everyone together—most of the crew was living in one house—and had everyone play different roles. We got out my iPhone with the viewfinder App, and we went through the sequence about ten times until we’d worked out the kinks. Then we used that for our blueprint on how to actually execute that scene.

Ally, your character goes missing after taking synchronic, how do you think she survived when she was trapped in another time?

There are a lot of big, bold shots for a non-big budget movie. How long of a build were some of those bigger shots, like the war scene?

Moorhead: That’s the thing, I wish I could say that was a two-week build, but it was like a day.

Ioannides: I still don’t know how they did that.

The camerawork is really interesting. We seem to aware of a little bit more than the characters are.

Moorhead: We decided to deploy a technique we used on our other films, which is that our camera is alive and it knows things that the protagonists don’t. It’s always looking at things you may not notice. For example, the sword in the wall in the opening scene, Anthony and Jamie didn’t even see it, but we did. You know you’re being shown something, but you don’t know why. We wanted to have the camera feel like an evil snake, an omnipotent thing that’s antagonistic towards our characters.

Let’s talk about Hawking the dog.

Ioannides: That dog is such a good actor.

Moorhead: That dog has no idea what’s going on at any given time. It’s so great.

I’m guessing owing to the budget, you didn’t have four dogs playing Hawking.

Moorhead: No. Just that dog.

Ioannides: Such a good boy.

Moorhead: And that dog didn’t like Anthony very much. You’ll notice there aren’t a lot of shots with them in the same frame [laughs]. I think what it was is the fact that the first thing we ever did with him was a really active scene, and the dog thought Anthony was chasing him.

Moorhead: That’s the thing, all the parts we were just terrified of going wrong, the big war scene, those were the ones that went right. We overplanned. We almost bid a CGI alligator out, we tried to figure out how to do the alligator, we asked so many questions, and you know what the easiest thing in the world was? That alligator. It was easier to work with that alligator and the snake then it was to work with the dog. I’m not joking. By a long shot. That alligator was just tired, so it just said and did whatever you wanted, and wherever you wanted it to go, it had a string that we painted out and you’d just pull on it

Ioannides: It’s also felt like that’s New Orleans, I feel like the animal wranglers in New Orleans are the chillest.