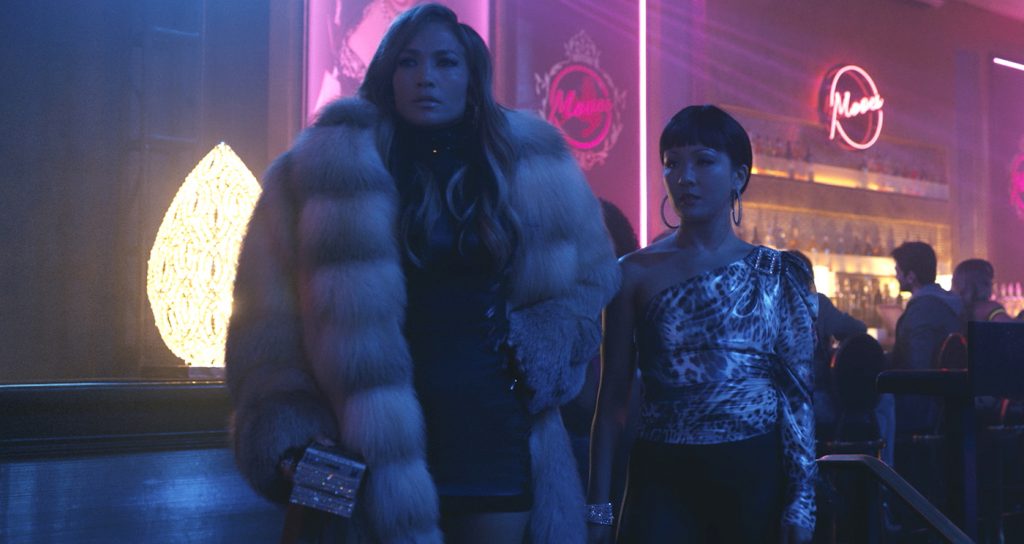 Writer/director Lorene Scafaria’s Hustlers, based on a gangbusters piece of reporting from The Cut‘s Jessica Pressler, follows a group of dancers-turned-criminals from New York’s famous strip club Scores. Although “criminals” in the Robin Hood sense—sort of. Sure, the two women at the center of the story don’t give their pilfered riches to the poor, but you’re rooting for them nonetheless. It also helps that they’re embodied by a sensational Jennifer Lopez as Ramona and the rising star Constance Wu as Destiny.

Scafaria’s film takes us back to a much simpler time—New York in 2007—right before the Great Recession. “The joy of what 2007 looked like in New York,” is how cinematographer Todd Banhazl puts it. Banhazl and Scafaria wanted to take viewers back to that moment right before the global economy buckled. “The kinds of fashion and music video and pop stars at the time, it was really the height of plastic,” he says.

Early scenes at Scores in 2007 depict an almost bygone world in which rich bankers could reasonably pretend to know what they were doing and a night at Scores could be seen as, at a minimum, glamorous-adjacent. This was a time when Usher might come into the club and pour money down on everyone, and the dancers could make a killing without, you know, nearly killing anyone.

“At the beginning of the film, we explore 2007’s version glamor,” Banhazl says. “The 2007 world is kind of gross, but deliciously gross. We wanted to shoot it in a much more gritty, cinematic way. Less like a music video, more like a gangster film. For example, there’s an early scene where Constance and her boyfriend are having a huge fight in their apartment and you sense it’s not going to end well. As their relationship is going down, the camera pans to the TV and it’s the first episode of Keeping Up With The Kardashians.”

So yeah, the world’s about to come undone. In short order, Hustlers turns into the story of a wild scheme. Ramona and Destiny hatch a plan to dose customers’ drinks, incapacitate them, and then max out their credit cards. It’s not as if the mostly risible banker-types that they drug and rob are pitiable, but it’s still a deeply dangerous game they’re playing.

“Our look was this Godfather look,” he says. “We used a top light, so we lit the women like the men are often shot in gangster movies. We wanted to explore Ramona and Destiny’s attempt to maintain control, and how do we explore this idea of control visually?”

It turns out that the way one films control is by sticking close to the characters as they plunge deeper into their scheme, and, of course, get in over their heads.

“Shooting control means asking yourself, ‘How are these characters feeling?’ Banhazl says. “We talked about long lenses, zooms, baring the frame down on them, using low angles. You’re watching these characters going through all this from this oppressively voyeuristic position. It came down to lensing. Very wide, bold, cinematic lensing, and very tight oppressive lenses.”

Banhazl spoke about using a tight or skewed eye-lines to heighten the effect of feeling as if you’re in the room watching people you like make some very bad decisions.

“These tight eye-lines we saved for these moments for when the characters are connecting, at their most emotional, the most life or death,” Banhazl says. “Like when they decide if they’re going to drug these guys, then we go super tight. These characters are moving so quickly through life, and eventually, it comes crashing down, so going off eye-line thing is about watching characters, feeling like you’re a third character in the room and watching them make these decisions, and thinking, ‘I’m not sure that’s the right idea.'”

The performances in the film are terrific, yet it’s Lopez’s turn as Ramona that’s garnering the most attention—and Oscar buzz. Banhazl says it was obvious on set that she was in the zone.

“We knew she was going to knock it out of the park from the moment she was cast. Lorene realized after her first draft, oh my god, this is Jennifer Lopez, that’s who this character is! Then on set we were aware she was super in the pocket, really in the zone, and it was happening live before our eyes.”

Banhazl’s lighting techniques were designed to give the performers as much freedom as possible. This was done by a lighting scheme that relied partly on lighting from above (for that coveted Godfather effect), partly from having the light come from outside the room so that it “bounces around naturally,” and partly through a wireless, 360-degree set-up that allowed them to make changes quickly.

“This allowed Lorene and the actors to be much freer,” Banhazl says. It also allowed him to listen to the actors when they had an idea, and to be able to adapt quickly. “Jen had blocking ideas that were spot on. She was so integrated with the script. You want to provide a space where everyone can do their best work and you can listen to their instincts. I’d never want an actor to have an instinct, and for us to say, ‘Well, I’ll need 45-minutes to make this change.’ Modern movies, there’s just no time anymore. I want to spend the time working the actors, there’s a way to set things so they’re really malleable.”

Hustlers is in theaters now.