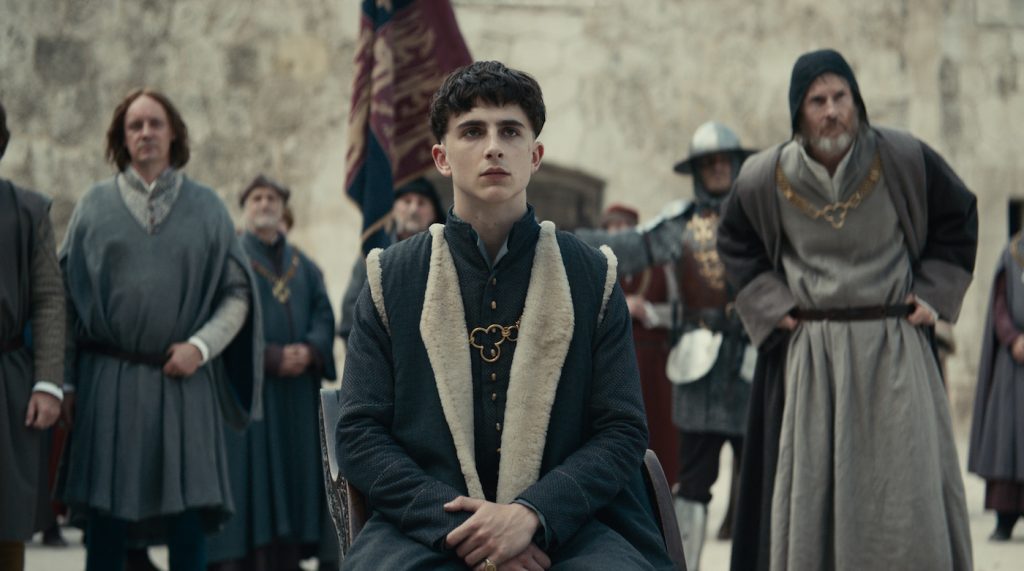 All hail director David Michôd‘s The King, which deploys a star-studded cast in this adaptation of a trio of Shakespeare’s plays—Henry IV, Parts 1 & 2 and Henry V—from a script from Michôd and Joel Edgerton.

The King centers on Timothée Chalamet’s Prince Hal, a young man not at all interested in royal trappings until his father dies and he finds himself on the English Throne as King Henry V. Things are not great in England, and the young King now finds himself at the head of a country wracked by war. Chalamet is a bonafide star, so his presence alone would be enough to get even those averse to English period pieces interested, but he’s far from the only big name in the film. The cast includes Robert Pattinson, Ben Mendelsohn, Sean Harris, and Edgerton. Chalamet chose The King after becoming a household name thanks to Call Me by Your Name, Beautiful Boy, and Lady Bird. All of which makes The King a very intriguing project.

The trailer sure looks great. Michôd is a rising star and his cinematographer Adam Arkapaw was the man behind the lens for Justin Kurzel’s riveting Macbeth adaptation. One of our favorite composers, Moonlight and Succession‘s Nicholas Britell, is on hand for the music, and the great Fiona Crombie, recently Oscar-nominated for her work on The Favourite, handled the film’s production design. These are all top-notch filmmakers.

Here’s The King trailer. Netflix will release the film later this year in select theaters.

Hal (Timothée Chalamet), wayward prince and reluctant heir to the English throne, has turned his back on royal life and is living among the people. But when his tyrannical father dies, Hal is crowned King Henry V and is forced to embrace the life he had previously tried to escape. Now the young king must navigate the palace politics, chaos and war his father left behind, and the emotional strings of his past life — including his relationship with his closest friend and mentor, the aging alcoholic knight, John Falstaff (Joel Edgerton). Directed by David Michôd and co-written by Michôd and Edgerton, THE KING co-stars Sean Harris, Ben Mendelsohn, Robert Pattinson, and Lily-Rose Depp.