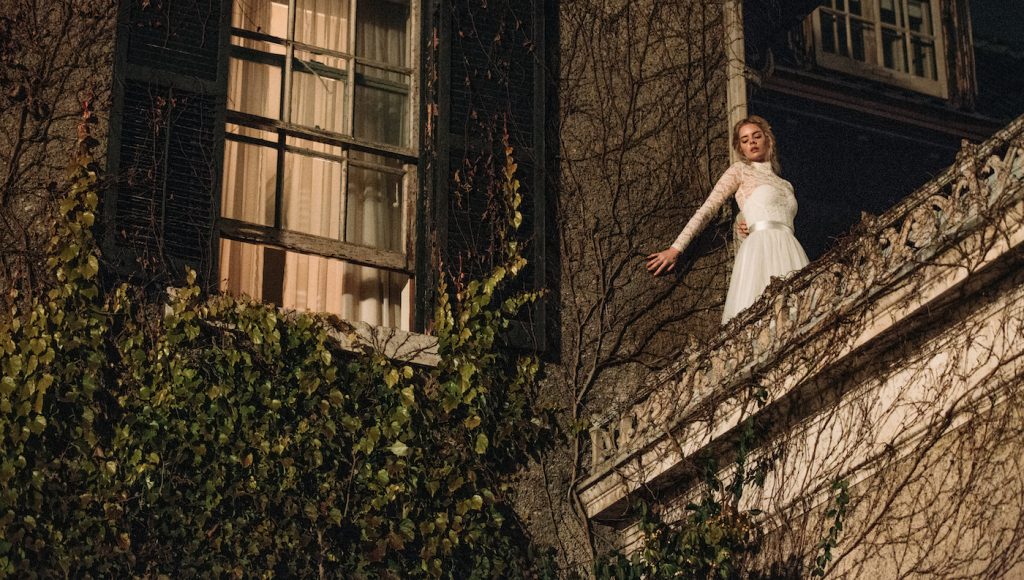 With a star turn from its lead actress and delivering a deliciously dark satire on greed’s ghoulish manifestations, Ready or Not just might be a late summer sleeper hit.

The premise is as simple as it is devilish: Ready or Not follows a young bride Grace (Samara Weaving, earning raves) as she joins her new husband Alex (Mark O’Brien)’s rich, eccentric family (Adam Brody, Henry Czerny, Andie MacDowell) for a little family tradition that involves putting newcomers through a nasty game that’s like hide or seek with life or death consequences. A new clip gives us a moment of relative calm; Grace is trying to hide from the lunatic family that’s hunting her when Daniel (Brody) finds her in the study. He doesn’t want to alert his family to her presence, but those are the rules of the game. He gives her a ten-second head start.

The film comes from a trio of filmmakers known as Radio Silence. They’ve previously made the low-budget but cleverly constructed V/H/S, Devil’s Due and Southbound. Radio Silence consists of Ready or Not directors Matt Bettinelli-Olpin and Tyler Gillet, as well as Chad Villella. The reviews for their latest effort are excellent.

Variety‘s Peter Deburge writes that Ready or Not “packs subversive pleasures aplenty, exaggerating the anxieties of marrying into an unfamiliar family by confronting its unsuspecting bride with a worst-case set of in-laws.” The Hollywood Reporter‘s John DeFore notes that “Ready or Not has a fine time with its setting… and Weaving is sharp enough to play things straight as the ensemble around her goes for the occasional laugh.” Critic Perri Nemiroff writes, “Who knew a big-screen version of ‘hide and seek’ could be such a blast? Ready or Not is an extremely well-crafted thrill with a clever mythology, a slew of colorful characters and a stand-out lead performance from Samara Weaving.”

So are you ready?

Ready or Not hits theaters on August 21.

TAGSFox Searchlight Ready or Not