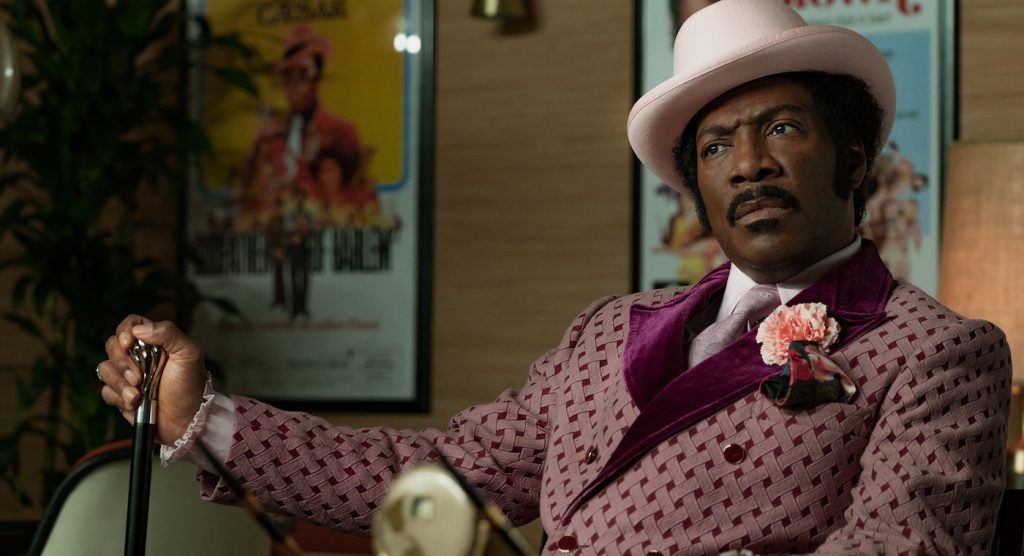 There are a lot of talented people involved in director Craig Brew (Hustle & Flow)’s new Netflix film Dolemite is My Name. Netflix released the first trailer yesterday, with the story following down-on-his-luck comedian Rudy Ray Moore (Eddie Murphy) striking upon a career-changing idea: the comic persona Dolemite. Moore’s genius idea was to recreate himself—with the help of some friends—into a brand new kind of film star. Written by Scott Alexander and Larry Karaszewski (The People vs. O.J. Simpson), Dolemite is My Name sees Murphy’s Rudy Ray become the titular Blaxploitation star. The trailer’s not only funny, but it also looks great. It helps when you have Oscar-winning costume designer Ruth E. Carter on board.

Stung by a string of showbiz failures, floundering comedian Rudy Ray Moore (Academy Award nominee Eddie Murphy) has an epiphany that turns him into a word-of-mouth sensation: step onstage as someone else. Borrowing from the street mythology of 1970s Los Angeles, Moore assumes the persona of Dolemite, a pimp with a cane and an arsenal of obscene fables. However, his ambitions exceed selling bootleg records deemed too racy for mainstream radio stations to play. Moore convinces a social justice-minded dramatist (Keegan-Michael Key) to write his alter ego a film, incorporating kung fu, car chases, and Lady Reed (Da’Vine Joy Randolph), an ex-backup singer who becomes his unexpected comedic foil. Despite clashing with his pretentious director, D’Urville Martin (Wesley Snipes), and countless production hurdles at their studio in the dilapidated Dunbar Hotel, Moore’s Dolemite becomes a runaway box office smash and a defining movie of the Blaxploitation era.

TAGSDolemite is My Name Netflix