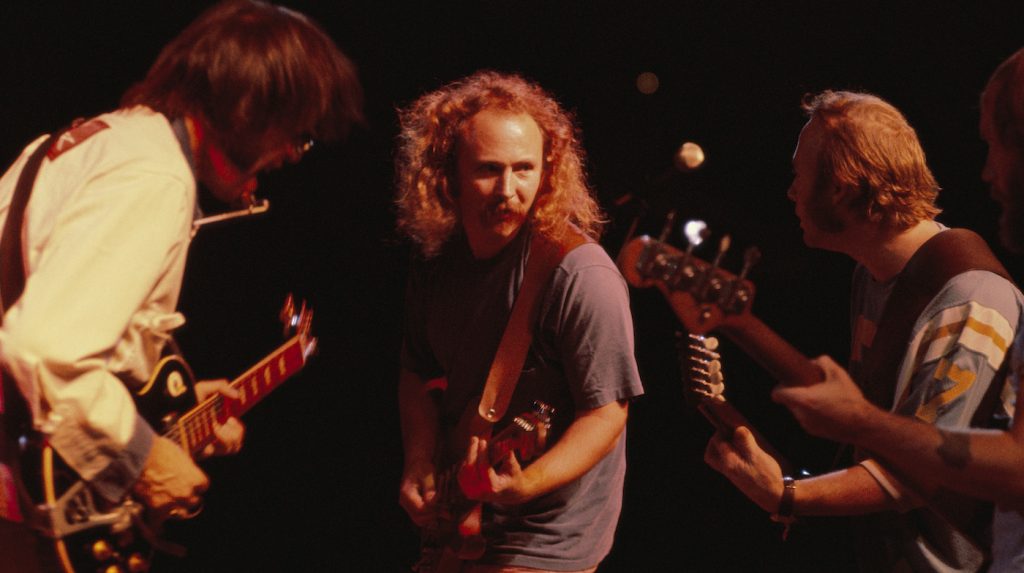 This past weekend, a new documentary played into theaters spotlighting musician David Crosby, called David Crosby: Remember My Name. He is most famous for his role in The Byrds and Crosby, Stills, Nash, and Young, and most infamous for his troubles with drugs and the law. In this film, however, audiences get a raw, brutally honest look at the man from his own perspective. Crosby’s challenges, his solo work, and his insights as someone with multiple health issues and a desire to leave a legacy of love and kindness behind, give the film more universal appeal than just to fans of his music. In this interview with The Credits, documentarian A.J. Eaton shares his experience of shedding new light on the life and career of a music legend and talks about working on the film with producer and interviewer Cameron Crowe.

Beyond the fact that Cameron Crowe has known David since he was a teenager working at Rolling Stone magazine, what do you see as Cameron’s particular talent as an interviewer, especially in talking to Crosby?

First off, I think Cameron has attained the trust of Crosby because of the way that he has, over the years, written honest and thorough pieces about him, and many other musicians. He comes at it from someone who celebrates the music. I think in another life, Cameron was a psychologist. He was able to really pull back the layers of Crosby, but that started with his trust and knowledge of the time period, and from being a rock journalist. There were so many amazing moments during the making of the film, and also when Cameron and I were together in the edit bay, where his expertise of the time period, as well as music and movies together, really worked well with telling the story.

The film feels really intimate, and Crosby’s stories are so pure. How did the nature of these interviews influence how you filmed?

From the outset, Cameron and I wanted to make the movie feel like Crosby is whispering a long lost letter to an old friend. We avoided a parade of talking heads. We wanted Crosby to tell his story, and we were right because he was ready to talk, tell his story, and get some things off his chest. We didn’t want to do fancy camera work, but rather a steady close-up shot and mic. That made you feel like you were in an intimate, heartfelt conversation.

The classic album from 1971, If Only I Could Remember Your Name, plays a major part in the documentary because it’s one of Cameron Crowe’s favorite albums. It also flows so well with his new work. Did you set about listening to it, or did you listen to his more recent music first? How did your perspective on him as both man and musician change over the time of working on the film?

When I met Crosby he was 69 years old and was recording Croz, which was his first solo album in 20 years. I was just astonished and surprised by how great the music was, knowing what he’s been through. That was my first experience with his solo music. We connected over music because I was making remarks on how fresh and luscious it was. As soon as I met him, I took a deep dive into everything he’d done, beyond the Crosby, Stills, Nash, and Young, which I knew because I grew up in the 90s. Their songs are still in the heart of our American fabric. I also fell in love with his music with CPR, and then Crosby’s new releases. After I met Cameron, I went home and listened to If Only I Can Remember My Name. I loved the song “Laughing”, and the bold choice of putting an instrumental in the middle of the album. I wish all the music today was as cool as that was.

I think the most compelling aspect of the film is seeing and hearing how, as he himself put it, “Brutally honest” David is about the demons of his past. He seems incapable of forgiving himself.  It’s like his music is his act of atonement. I think the idea of art as transformational for the artist would be a powerful hook for audiences. Has that been something you’ve had in response to screenings?

I’m really proud of the fact that we have been able to tell a story that becomes more than just a story about a man who happens to be a musician.  It’s about the human condition, and about friendship, harmony and, indeed, hope. I’m so happy with the fact that I’ve had so many people come up to me and say the movie makes them think about themselves and about their friends. I hope that it will inspire people to make some phone calls, and pick up that pen or guitar, and keep writing. Time is so important. What are you going to do with it? What are you going to create while you’re still here?

I’ve grown up around musicians and the music business and I think about what people call writer’s block, and they don’t feel like they are inspired to write anything. Given all that Crosby’s been through, and the guilt that he has, it’s amazing he has been able to overcome that and find an outlet through music. Songs on his latest album talk about Christine, his girlfriend that he lost tragically so long ago. There’s a line in one of his songs, “Why must we be eternally alone?” One of my favorite tunes that we use has the line, “Where will I be when I’m all alone?” It’s like his younger self, singing to his current self. I love how we touched into his world of music.

There is more than a little about mortality, and how it influences artistic expression. He just keeps going, not knowing how long he has.

When I met Crosby, I realized that I was witnessing what was a third-act renaissance by an artist. He, after 20 years, decided he wasn’t done writing music. That takes a lot of courage for someone who has achieved what he has in his career, to work with a bunch of young collaborators and take chances. The risk is that it will never live up to what he’s done, but I think it works perfectly within the canon of great Crosby music. It’s so cool to see new albums constructed in the same way, with a focus on harmony, and not with big drums and rock guitar. Crosby wrote a song called “Time is the Final Currency”, and that message is so powerful. It inspires me for my own future.

Since the release, what is the most gratifying experience for you?

I now realize working on the film that Crosby’s music, as well as music from CSNY and The Byrds, means so much to people. We had a tremendous responsibility on our hands to make a movie that both satisfied the diehard group of fans, but also that would open people up to him, who didn’t know his work or his life. The publicist with me right now didn’t know anything about him, or who he was, but when she watched the movie from start to finish, she developed a whole new appreciation of that period of time and the music. I’m pretty enthusiastic and happy about that.  Also, as I said earlier, it has transcended the genre of music documentary. It’s not just about a man and his music. It’s about ideas, like what time means, and how inspiration and change and openheartedness can mean whenever it happens. I’m really just humbled and encouraged that people are walking away from this movie with hope.