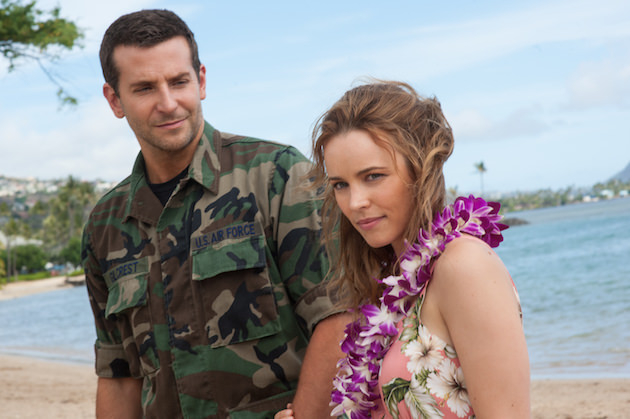 From Rolling Stone To Aloha: The Odyssey of Cameron Crowe

The story of Aloha is, to grossly simplify it, about a man torn between a woman he thought he had moved beyond and a woman who might be his future. Military contractor Brian Gilcrest (Bradley Cooper) returns to Honolulu, Hawaii, which is the site of his greatest career triumph, and reconnects with a former love (Rachel McAdams). Because he’s at a military site, he’s assigned an Air Force minder (Emma Stone), who he begins to fall for. Because this is a Cameron Crowe movie, you know a couple of things; these relationships are going to get keenly, deeply scrutinized, there are going to be several outstanding performances, many from supporting cast (Alec Baldwin, Danny McBride, etc.), and there’s going to be great music (Jónsi & Alex provide the score.)

“I wanted to tell the story of the lure of the past and the promise of the future,” Crowe said in the press notes. “It’s always easy to look backwards, to remember all of the good moments that happened, and to long for those moments. It’s scarier to look at the future and try to create a future that’s as rich – and even more rich – than the past. I wanted to tell the story of a guy who’s been looking over his shoulder with a certain amount of regret, who learns to look forward. That was the dream of what a story set in Hawaii could be…Ultimately, this is a film in the continuing story that I’ve always been trying to make – what is it to be an adult, what is it like to grow older, who are your friends, who are the people that matter, who sticks by you, who doesn’t, how do you shape your life as you continue to live it.”

That continuing story that Crowe has been telling is only equally as interesting as the story of his own life. He’s had the kind of career you might have brazenly said you’d attain when you were a teenager—I’m going to write for a hugely influential magazine where I’m going to profile all these icons, I'll go on tour with some legendary bands, then I’m going to write a book, then I’m going to turn that book into a movie and become one of the most successful writer/directors of my generation. Right. Only Crowe actually did all this, and his backstory itself is absurdly cinematic.

Crowe started writing for Rolling Stone when he was fifteen years old, an experience he mined for his Oscar winning script Almost Famous. He was writing for the magazine in the early 1970s, profiling music’s gods—David Bowie, Bob Dylan, Neil Young, Eric Clapton and Led Zeppelin to name a few. Crowe went on the road with the Allman Brothers and Lynyrd Skynyrd, and he went undercover for a year at Clairemont High School in San Diego, which he turned into a book, which then became his first film—Fast Times at Ridgemont High. If you’re too young to remember that film, just know it was a massive hit and launched the careers of Sean Penn, Forest Whitaker, Nicholas Cage and Jennifer Jason Leigh to name a few.

Crowe’s 1989 film Say Anything was a critical darling, a perfect teen comedy, engendering all sorts of wild notions in kids of that era—namely, that the nerd can and should end up with the beauty. Lloyd Dobler (John Cusack) standing outside of Diane's (Ione Skye) house with a boom box over his head playing Peter Gabriel's "In Your Eyes" is the quintessential moment of the late 80s, right up there with "Mr. Gorbachev, tear down this wall!"

In 1992, Crowe turned his keen eye about relationships to Singles, which, along with Reality Bites, captured the milieu of the early 90s better than almost any other romantic comedy.

Crowe’s next two films took his already healthy film career to the next level. In 1996 he delivered Jerry Maguire, which went onto to become a worldwide hit, gobbling up award nominations (5 Oscars, 3 Golden Globes, 3 SAG awards), earning co-star Cuba Gooding Jr. an Oscar (which included his legendary Oscar speech), and became the best-selling non-Disney VHS tape (remember those?) of all time, with 3 million copies sold on the first day. The film’s impact was such that quotes like “show me the money” and “you complete me” were in wide circulation in the mid-to-late 90s, and the soundtrack (every Crowe film has an incredible soundtrack) included his former profile subjects Bob Dylan and Neil Young, as well as the Boss, Elvis, The Who and Paul McCartney.

Then in 2000 came his semi-autobiographical film Almost Famous, which snagged a Golden Globe for comedy or musical film, and was nominated for four Oscars, with Crowe winning for best original screenplay. Patrick Fugit plays the young journalist William Miller, a Crowe stand-in, who profiles the band Stillwater and becomes enmeshed in their world, going against the very sensible advice from legendary rock journalist Lester Bangs, played perfectly, poignantly by the late, great Phillip Seymour Hoffman. (Crowe also wrote one of the great lines of dialogue of this century, which Hoffman crushed, in an exchange between Bangs and William Miller, after Miller's been used and abused by Stillwater: "The only true currency in this bankrupt world is what you share with someone else when you're uncool.")

In 2001, Crowe went a completely different direction with Vanilla Sky, a trippy, challenging film about a vain publishing magnate (Tom Cruise) finding his life irrevocably altered after he’s maimed in a horrific car accident. Again the soundtrack was amazing (Paul McCartney was nominated for an Oscar for his original song “Vanilla Sky”), but here was Crowe showing us a completely different side of himself, casting a much darker glance on relationships, what they mean, and the potentially grim consequences of getting involved with people who aren’t right for us.

Aloha is Crowe's first narrative feature since 2011's We Bought a Zoo, and for Crowe fans, every release of his is a chance to watch a singular screenwriter and director at work. Great actors flock to his films because of the dialogue, the depth of feeling, the twisting relationships. Audiences revel in the language, the music, the passion. With Vanilla Sky as the exception, it's hard to watch a Crowe film and not wish you were living in it.