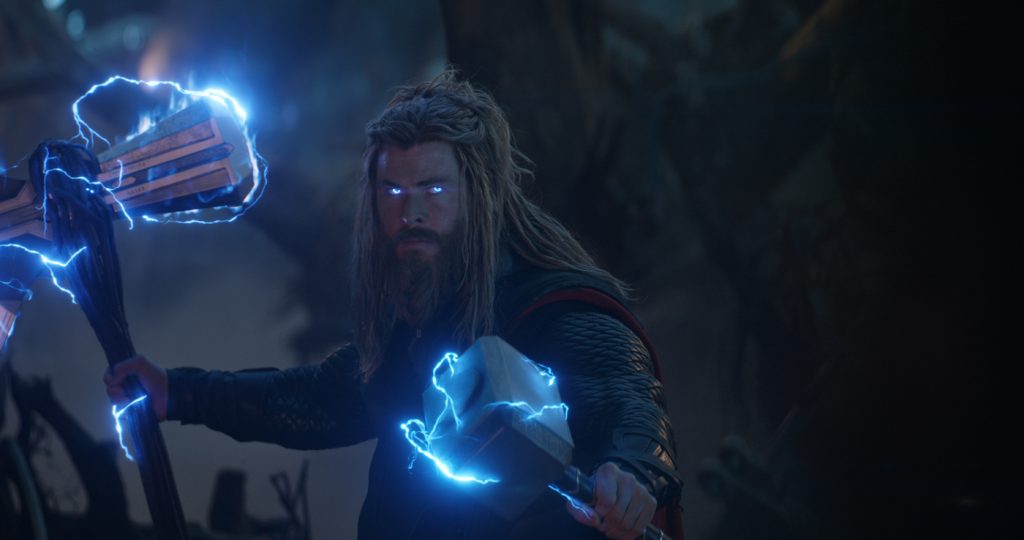 With Avengers: Endgame available for digital download today, you can be sure any piece we publish about the film will contain spoilers. You’ve been forewarned.

When you think of Chris Hemsworth’s performance in Avengers: Endgame, you think of a man who took on a 30-pound fat suit and just went for it. His Chunky Thor was one of the highlights—and surprises—of the film. Most fans adored Chunky Thor, and Hemsworth’s winning performance as the God of Thunder after one too many six-packs was a triumph of comedic timing. It also followed Hemsworth’s much funnier Thor in Taika Waititi’s Thor: Ragnarok, cementing the Asgardian with a heart of gold as one of the most hilarious Avengers around. In a new “Anatomy of a Scene” by the New York Times, directors Joe and Anthony Russo break down the first time we see the larger, unkempt Thor.

Smart Hulk and Rocket have tracked Thor down in New Asgard (now on Earth after his home planet was destroyed in Ragnarok), living in filth with his alien friends Korg (the rock monster voiced by Waititi) and Miek. Hulk and Rocket have arrived to get Thor to return with them to Avengers HQ so they can set about defeating Thanos (again) and bring back everyone he snapped to dust. While the sight of a beefy Thor is immediately arresting and funny, the Russo Brothers highlight the nuanced performance Hemsworth delivers. Jolly on the outside, crushed and depressed within, Thor is drowning himself in beer and fried food because he blames himself for the universe having been halved by Thanos. First, he should have gone for the head in Infinity War, then, at the outset of Endgame, he did go for Thanos’s head, and removed it before the Avengers could figure out if there was a way to undo the damage.

The scene pivots from comedy to drama at the mere mention of Thanos’s name. Hemsworth delivers and does so while interacting with Sean Gunn (who doubles for Rocket’s body) on his knees, Mark Ruffalo wearing motion-capture equipment and standing on a platform, and two CGI characters in Korg and Miek

Check out the video below, which unpacks the scene in terrific detail. Avengers: Endgame is available for digital download right now.