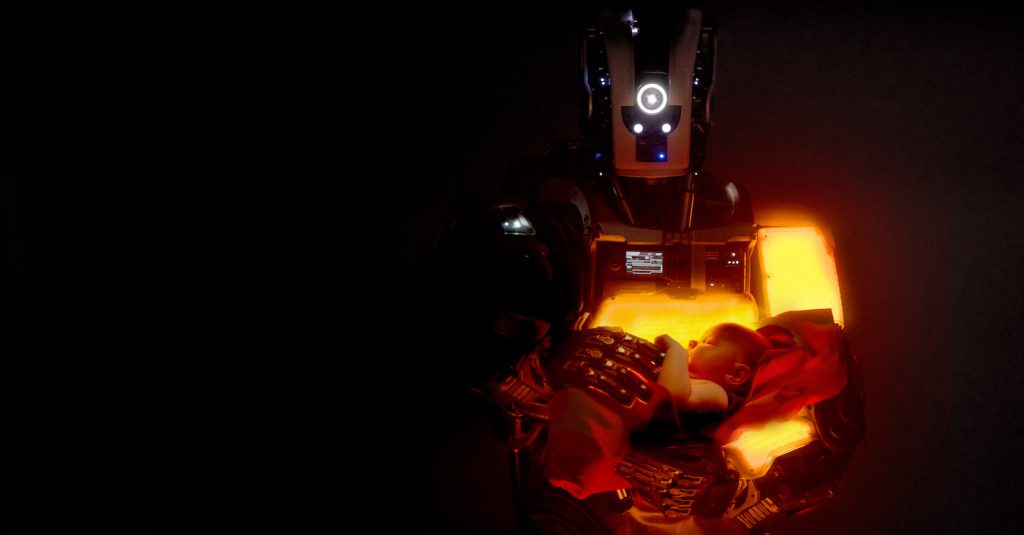 Humankind has all but gone extinct, but Mother (Rose Byrne) is on the case. The fact that Mother is a dulcet-voiced robot shouldn’t alarm you—at least, not yet. Her mission is to repopulate the earth, and she begins her work with a little girl (whom she simply calls daughter) who is all but perfect. Daughter grows up (played as a teenager by Clara Rugaard) loving Mother, learning from her, dutifully studying for her tests and essentially excelling at everything Mother throws at her. She’ll make a fine first inhabitant of the repopulated Earth that Mother keeps promising is coming. Things get tricky, however, and then downright sinister, when an injured stranger comes banging on the front door of their heavily fortified lab. This woman (played by Hilary Swank) not only doesn’t trust Mother, but she also claims that there are others like her and that Mother has been lying to Daughter about the world outside the lab’s doors.

Director Grant Sputore’s I Am Mother pivots into a proper, claustrophobic sci-fi thriller that only gains momentum, and menace, as it hurtles along. We spoke to editor Sean Lahiff about how he cut the increasingly nerve-wracking I Am Mother to maximize the tension and dread.

Working with a central figure who is not human, how did that inform your choices? I imagine filming coverage, cutting to and from certain expressions, things like this must have been much different due to Mother being a robot?

This was all new to me, I’d never edited a robot before. It had its challenges, advantages, and wild-cards, just like a human character. Lucky for us, Luke Hawker from Weta Workshop who lead the team to construct Mother, also wore the suit. This formed the entire basis of Mother and who Daughter was acting within the film. You couldn’t just pick any old head turn and cut it in as a response to Daughter’s dialogue. Mother’s facial features played a big role in expression selection. If Mother was thinking, the Weta animatronics team would rotate her eye-ris (her little focus ring that opens and shuts like an iris, but looks like an eye), or if she practiced her humor she’d finish with a smile. After spending so much time editing Mother we were able to perfect her performance and personality, depending on the desired emotion we were chasing. But eventually, the time came to replace his voice with Rose Byrne’s, who brought another level of depth and warmth to Mother. It was a unique edit process and I was blessed to have the opportunity to edit such a stellar cast.

One of the film’s most reliably unsettling effects is simply whenever Mother is charging through the huge underground lab looking for Daughter. How did you help make these moments so unnerving?

Those moments of Mother charging at pace through the corridors were several of the very rare moments Mother was CG. The risk of damaging the extremely precious suit wasn’t worth the gamble. When cutting to these moments it was important not to hold onto them for too long. We needed to keep the pace kicking along and the brief glimpse of seeing Mother in full swing was more effective in keeping the audience on edge because we don’t allow them long enough to see exactly where she is, but that she’s coming!

The underground lab/living space is filled with corridors and dark spaces. It reminded me a bit of the spaceship from Alien and Aliens. What kind of conversations did you and Grant Sputore have about making the most of this setting?

That’s fantastic you picked up on those two references, I won’t speak for Grant but from my perspective, Alien was a great reference point for tension, tone, and setting. Grant and I talked about our favorite films, inspiration, intention, motivation…everything. The director and editor go through quite a journey together, so I enjoy looking back to where it all started. From the beginning, Grant and I shared a clear vision of tone, style, and pace. We talked about everything, broad brush strokes and intricate detail. We talked about desired performance moments from our human cast and the favored intricate movements of Mother’s facial features. In every facet of production, Grant would strive for perfection. This was a great attribute he also brought to the edit room and it influenced my editing process in a fundamental way. We left no stone unturned when investigating the potential of every scene. We’d pressure test everything and explore all our options.

Other than Alien, did you have any touchstones or references from previous films when you were thinking about this project?

There were definitely references we discussed but nothing was quite like the film we were trying to make. Strong independent films like Ex Machina and Moon were talking points, but mainly as a reference of the benchmark they set for sophisticated sci-fi with a cast of only a few. When temp scoring the film during the early stages of the edit, I drew reference from and was inspired by films like Arrival and Blade Runner 2049. In terms of references from previous films I have edited, I certainly knew that I’d be doing a lot of temp sound design and effects to get us through the directors cut and test screenings. On all the films I edit I strive to create a solid sound-scape so during the day-to-day editing it’s easier for the director and me to escape into the world of the film. It also paints a more confident picture and helps films sit within their genre.

One of the really cool things about the film is how much excitement you generate with essentially three characters. Did this small cast make your job any harder? Easier?

I found having a smaller cast to be an advantage because it allowed us to get intimately close to Daughter, which enhanced the feeling of experiencing her unfolding narrative. Daughter is on screen for 95% of the film, so there’s nowhere to hide. We were blessed to have such a great performance from Clara Rugaard. I love how with only three characters, we told a story about the survival or potential extinction of the human race. In terms of taking a break from seeing either Mother, Daughter or Woman on screen, we let the bunker shine as the future birthplace of humanity and showed off its vast dark corridors and great set design.

I Am Mother is streaming now on Netflix.

TAGSEditor I Am Mother Interviews Netflix